The war in northern Ethiopia that began in November 2020 has left millions in Tigray on the brink of famine.

Reports suggest that nearly 40% of the region's six million inhabitants face "an extreme lack of food". Shortages have forced aid workers to deliver medicines and other crucial supplies "sometimes by foot".

A few convoys have been allowed to enter Tigray, but the United Nations says convoys of at least 115 trucks are required daily, yet the entire region is classified "hard to reach". This indicates that it is effectively inaccessible.

This is not the result of a natural disaster - it is a famine induced by the closure of the borders of Tigray by Ethiopian, Eritrean and Somali forces, reinforced by militia from Ethiopia's Amhara and Afar ethnic groups.

Since the Tigrayans' army retreated into their region in December 2021, they have been surrounded by armies that have blockaded Tigray.

A handful of aid convoys have been allowed through. They have been far fewer than the humanitarian assistance required daily to feed the population.

The blockade and resulting famine are well recognised. What is poorly understood are the origins of this crisis.

They lie in a bitter feud between Eritrea's President Isaias Afwerki and Tigrayans that dates back to the 1970s, and the president's determination not to allow them to rebuild their forces by cutting their supply lines to Sudan, reports Martin Plaut for The Conversation. 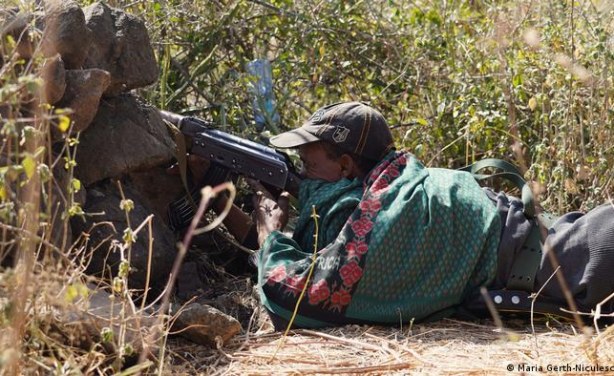 An armed member of a local militia watches the hills for Tigrayan fighters (file photo).