University students from Rwanda have cultivated new innovative solutions that may bring change to construction and agricultural industries.

Awoke Ogbo, a university graduate in Global Challenges at Africa Leadership University based in Rwanda, is preserving the environment by recycling plastic bottles into bricks. The idea is in line with Rwanda's decision to ensure a sustainable environment since the government commenced elimination of use of single use plastics in 2019.

This comes as Green promoters, a team of five young Rwandan innovators, won the Wege Prize 2022, a competition organized by Kendall College of Art and Design's Wege Center for Sustainable Design-USA.

Their winning project was about making an environmentally friendly, safe and affordable product which can be used as both pesticide and fertilizer. Commenting on the award, Green Promoters Team Leader, Marie Merci Uwimbabazi, student at Rwanda Institute for Conservation Agriculture said that it was a very big honor for the team to represent Rwanda and their universities on a global stage to win the biggest prize which will be the initial investment to the implementation of their project.

"We were privileged to be awarded as the first winner of Wege Prize 2022 and we are moving forward to the implementation of this idea so as to serve our community and the world," she said. 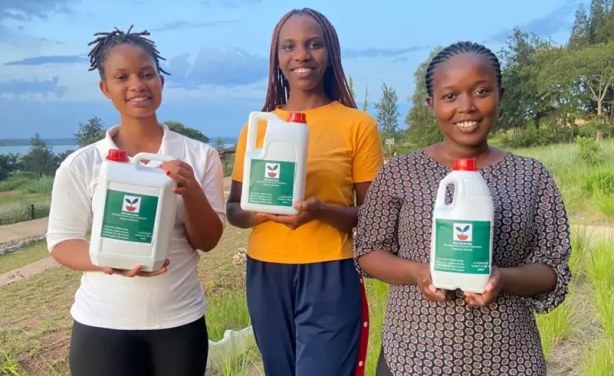 Three of five members of Green promoters, a team of young Rwandan innovators who won the Wege Prize 2022.