Ethnic clashes in a deadly land dispute in Sudan's Blue Nile state have killed 105 people and wounded 291, the state's health minister Jamal Nasser said on Wednesday July 20, 2022. The new toll is being reported by the AFP news agency.

AFP quotes Nasser as saying: "The challenge now is in sheltering the displaced." The minister was speaking by telephone from the state capital al-Damazin, some 460 kilometres south of Khartoum.

The United Nations says thousands of people have fled their homes from the fighting, with 14,000 people displaced from the Ar Rusayris area.

AFP reports that the violence is between the Hausa and Berti ethnic groups. A  prominent Hausa member is quoted as saying that the Bertis rejected a Hausa request to create a "civil authority to supervise access to land". But a senior Berti leader said the group was responding to a "violation" of their land by the Hausas.

In Sudan, deadly clashes regularly erupt over land, livestock and access to water and grazing, especially in areas full of weapons left over from decades of civil war, AFP reports. The nation has seen months of mass demonstrations demanding the restoration of a transition to civilian rule following a military coup last year. 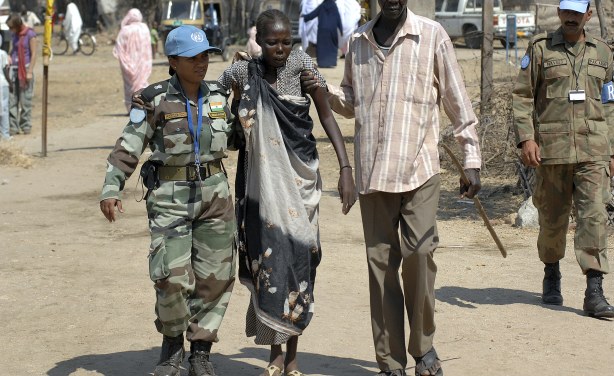 A peacekeeper helps a civilian in southern Sudan (file photo):