Senegal's Sadio Mane was crowned the African Footballer of the Year for the second time running at a Confederation of African Football (CAF) awards ceremony in the Moroccan capital Rabat. Mane scored the winning penalty as Senegal beat Egypt in a shootout in this year's Africa Cup of Nations final to lift the trophy for the first time. Mane beat compatriot and Chelsea goalkeeper Edouard Mendy as well as former Liverpool team-mate Salah, whose Egypt side lost February's final.

Mane's prize was one of five picked up by Senegal in a total of seven men's categories in a night to remember for the West African nation.

Nigeria and Barcelona forward Asisat Oshoala retained the African women's Footballer of the Year title. The 27-year-old picked up the award ahead of Ajara Nchout Njoya (Cameroon and Inter Milan) and Zambia international Grace Chanda (Zambia and BIIK Kazygurt).

With this, she becomes the first African to win this prestigious title for a record five times, overtaking Perpetua Nkwocha who claimed the accolade on four occasions.

A host of African football legends such as Daniel Amokachi, Lucas Radebe, Austin Jay-Jay Okocha, Geremi Njitap and Senegalese duo El Hadji Diouf and Khalilou Fadiga - who celebrated on stage with Mane - were in attendance for the awards at the Mohamed VI complex. 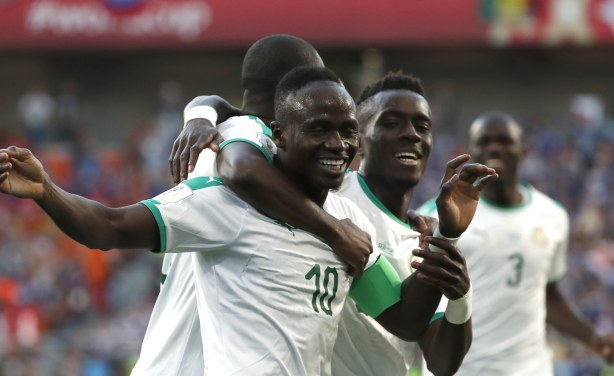 Sadio Mane of Senegal celebrating with his teammates after scoring the opening goal during their match with Japan in Ekaterinburg on June 24.