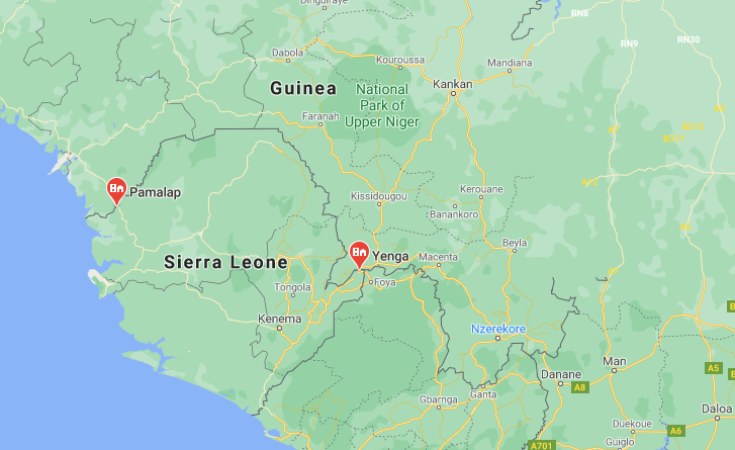 Freetown — Many people in Sierra Leone, including passionate writers who pick issue with the growing concerns of security threats in the Eastern border town of Yenga in Kailahun district, were recently cautioned by President Alhaji Dr. Ahmed Tejan Kabbah to avoid another possible border crisis.

The controversial border issue, although unsettled for over a hundred years, seems to have taken a different dimension in recent months following inundating concerns from civil society organizations and the opposition All Peoples Congress party.

"We know we cannot go into war with Guinea because of their military might. But our government must not sit behind and watch the situation degenerate further," she suggested.

Similarly, concerns and complaints by Sierra Leonean residents of the border town of Yenga suggest the development is a possible recipe for another border crisis in the West African sub-Region unless, according to them, government fast racks the remedy being sought to forestall it.

They would complain of constant subjection to hard and forced labour by occupying Guinean forces. A native of Yenga who returned to Freetown apparently rallied around civil society including the press to pile pressure on the government over what he described as Guinean invasion.

The pressure also showed up strongly in the Ombudsman's heap of complaints for the past six months. This situation forced him to pick an issue with the government to the extent of suggesting that the matter be referred to The Hague for redress.

Francis Gabbidon put it straight to the government that Yenga is of strategic importance and called for prompt action that would put to an end to the matter once and for all.

It would seem the Ombudsman's suggestions, like the civil society and the chain of press reports, did not go down well with President Kabbah. He would warn all Sierra Leoneans to not only refrain from making such crisis provoking concerns, complaints, and assertions but also jeers that would strain the country's relations with her neighbours.

"I should admonish Sierra Leoneans to refrain from making utterances that may tend to complicate our relationship with our neighbors. For quite sometime now, reports and statements in the press on the Yenga and other matters have tended to be inflammatory and misleading, undermining government's efforts to amicably address this and other border issues, particularly with Guinea. Distortion of the facts about this matter and the use of belligerent language by some individuals and sections of the press are unwarranted and dangerous." Specifically on the Yenga issue, President Kabbah says Guinea and Sierra Leone had jointly commissioned French and British experts to study the issue and assist the two governments in demarcating a boundary line between the two countries.

However, reports by these experts were recently received with appreciable agreement registered by the two experts, but some minor points still remain unresolved, thus delaying the achievement of a lasting solution on the matter. That notwithstanding, the Sierra Leone government would virtually give the impression that there are no contentions about the ownership of Yenga, which clearly belongs to Sierra Leone. This, according to the government, is consistent with earlier Communiqués that it had signed with the government of President Lansana Conte of Guinea reaffirming its ownership of Yenga.

Even with a clear position, it would seem, the government of Sierra Leone acknowledges the fact that the main argument is that the left bank of the Makona River should be the boundary between Guinea and Sierra Leone. Given such scenario, the position of the French expert is that since the location of the river may change in about 1,000 years, the boundary issue may continue to be the subject of discussion after that time. The British expert on the other hand holds a slightly different view. According to him if the said consideration were deemed to be important enough, it would have been clearly stated in the Treaty signed in 1912 by the British and the French.

Apparently, both governments including that of Liberia in the Mano River Union basin agree the Yenga issue is one of those unsettled colonial legacies. The UN Mission, which folded up in December last year subscribed to that fact too when it stated that all it could do was to get the two governments see reason to handle the matter diplomatically.

Incidentally, this same matter was not resolved when it was taken up in 1974 by the then Prime Minister of Guinea, Mr. Lansana Beavougui and the then Vice President of Sierra Leone, Mr. Sorie Ibrahim Koroma.

In any case, the area in dispute, important though it is because of its strategic and viable economic prospect, is relatively small.

As recently as last month while commissioning the Type 62-1 Chinese Patrol Boat in Freetown, President Kabbah raised the Yenga issue again saying a meeting on the border dispute was going to be organized between Guinea and Sierra Leone following receipt of the British and French reports but setbacks set in.

"However, the meeting did not take place because of the lack of translation of the two reports. This was compounded by the recent strike and industrial dispute in Conakry, which came to an end only a few days later," he pointed out while he emphasized there is neither a crisis in Yenga nor is any crisis in the northern border town of Kambia.

He would also stress that relations between Guinea and Sierra Leone are very cordial and should not be clogged by utterances and baseless concerns as expressed by the public.

"Those who take the simple view that border issues can be resolved either through recourse to violence or through the courts should be reminded about such cases as the Bakassi border dispute between Nigeria and Cameroon, which had been adjudicated on by the International Court of Justice but still festers years afterwards. People should also note that unlike national courts, international courts such as the ICJ do not have the means to enforce their decisions.

Obviously it would be madness to contemplate the use of force in such cases. We are therefore firmly convinced that the diplomatic approach that we have adopted with cooperation and support from friendly countries, ECOWAS and the Mano River Union has the best chances for delivering a peaceful and permanent solution." It is obvious that no amount of undue pressure from civil society, the press or the Ombudsman as the case may be, would compel the government to making hasty decisions on such a very sensitive security issue.

This is because border crises such as the one between Ethiopia and Eritrea saw over two hundred thousand civilians killed in two years.

Unlike Yenga, problems in the northern border town of Kambia started with prospecting activities for bauxite being carried out by Sierra Leone's Mines Department when the Guinean border guards became suspicious that the military on the opposite side might be digging trenches in the area, and reported the matter to their superior authorities.

Swift measures were taken to handle the issue. The Sierra Leone authorities were alerted and a meeting between the two sides was convened where the matter was clarified and resolved.

Previous Story
Guinea Not Ready to Give Up Yenga
Next Story

Guinea Not Ready to Give Up Yenga

Previous Story
Tagged:
Copyright © 2006 Concord Times. All rights reserved. Distributed by AllAfrica Global Media (allAfrica.com). To contact the copyright holder directly for corrections — or for permission to republish or make other authorized use of this material, click here.