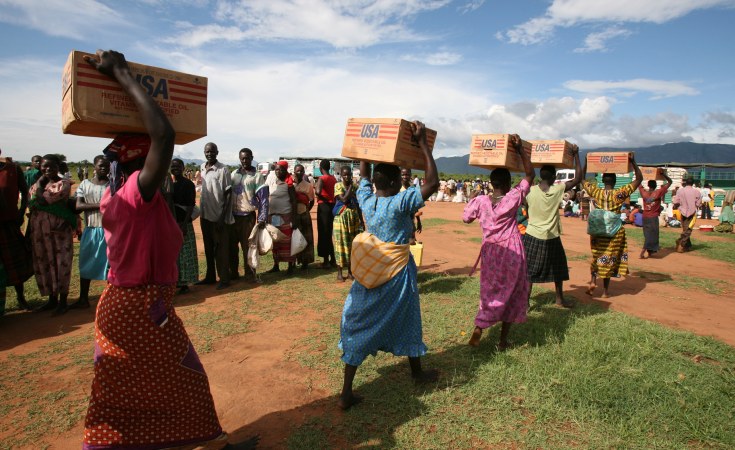 IRIN
Women carrying cartons of oil to the distribution site an IDP camp in Uganda: Current discourse on aid raises the question of when such distributions of food from international organizations stops being helpful and starts being destructive.
allAfrica.com
interview

Michael Joseph, CEO of Safaricom in Kenya, believes the mobile phone has had a greater impact than aid on development in the country.

Speaking with AllAfrica about foreign aid and foreign direct investment, the South African-born Joseph said in his experience one is generally more sustainable than the other.

Can you tell us a little about your experience with foreign aid?

I think my experience has been indirectly as an observer, although Safaricom with its social responsibility program has been involved with NGOs that are putting aid in directly.

How would you compare foreign direct investment and foreign aid in Africa in terms of helping the continent develop?

Aid is just given away. If you look in Kenya - and we've had 40 or 50 years of aid, mostly from the European governments and NGOs - it has made very little long-term impact. If we had put that [money] into investing in factories, building infrastructure, creating jobs, I think we would have a much better impact than what we have today. Most [aid] is badly directed, it's not directed toward sustainable projects.

Generally, a lot of the money is spent on administration, vehicles, expat salaries and things like that. Very little of it actually goes into really benefiting the community for which it's designed.

If you look just at the northern part of Kenya where it's very arid, much of the aid is given to people just to attend meetings. Communities are paid just to attend meetings so they're quite happy for this aid because they go to this meeting, they get a sitting allowance, they get lunch and then that's the end of it. I think [aid] can be good in some cases. But mostly it's just not sustainable and as soon as the aid stops people go back to square one.

It's almost like paying somebody off. It's like blackmail to some extent. If I give you this money you'll go away, you'll go away for a year, and next year you'll come back and you'll ask me for more money but at least I'll have a year's peace.

How do you think aid would be most beneficial?

I think aid should be directed to projects that are sustainable in the long term. If you look at Safaricom's social responsibility program, we actually do something that is sustainable so if we withdraw [the project] continues.

You have said that the mobile phone industry has had a bigger social impact in Africa than anything before. Do you still believe that and do you believe it has had a greater impact than foreign aid?

Yes, oh yes, because it has changed people's lives for the better.

Foreign aid changes people's lives temporarily and that's it, when it's gone it's gone. Mobile phones have made a huge impact in places like Kenya.

If you look at Africa in general, in the developing world in general, there is very little direct investment and very few jobs are created from the outside. People, particularly in Kenya, want to work, they need to work, they don't just sit around and wait for people to come and help them. People in Kenya tend to be quite industrious. The mobile phone has been almost perfect for that because it allows people now to create jobs for themselves. They don't always have to come to the city. There are now telecommunications facilities throughout Kenya so it's helping people create small businesses.

In Kenya 70 percent of our economy is in the informal sector. This means that a lot of the people are just doing small jobs, or are small-scale farmers, they're just doing work on the side of the road, they sell things, they're traders. And they're all doing it because the mobile phone has allowed them to do it. I've said many times I think half the GDP growth in Kenya comes because of the mobile phone revolution, not because of anything else. It has provided these people means of communication.

(A study cited last year link when posting by the GSMA, which represents the interests of the worldwide mobile communications industry, said a one percent increase in mobile penetration rates has been associated with .5 to .6 percent higher rates of GDP.)

Particularly things like money transfer, which we have been doing now for nearly two years, it has made a huge impact on people's lives.

And aid agencies have gotten in on using mobile phones as well.

In many ways aid agencies have gotten involved. Fisherman can now send an SMS to get information about where the best prices for fish are so they can take their fish to the right place. Farmers can get their price for their products from different markets via SMS.

I think that aid, the way it is at the moment in general, is not good for Africa. There are good organizations that do a great job. But you've got to look at how much aid is given and how much of it is actually spent on administration and overhead. If you count how many four-wheel drives there are in Nairobi I guarantee that 50 percent belong to aid agencies and it's completely unnecessary.

Previous Story
Tagged:
Copyright © 2009 allAfrica.com. All rights reserved. Distributed by AllAfrica Global Media (allAfrica.com). To contact the copyright holder directly for corrections — or for permission to republish or make other authorized use of this material, click here.