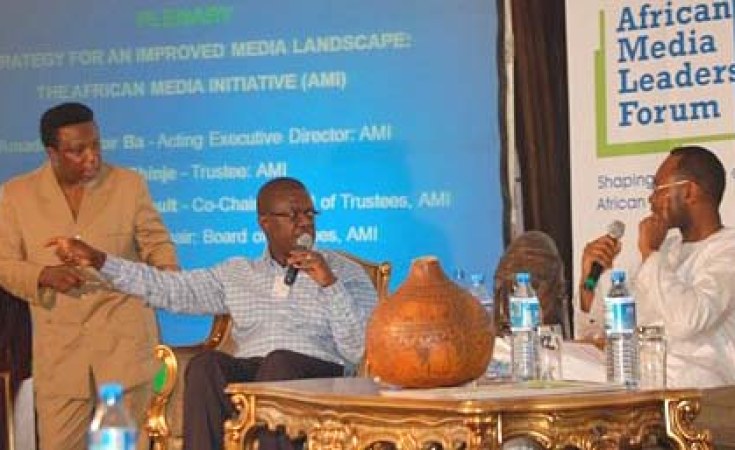 Tami Hultman/AllAfrica
Trevor Ncube, longtime media entrepreneur in Zimbabwe and publisher of the Mail & Guardian in Johannesburg, makes a point at the Media Forum in Lagos, with Eric Chinje (left) of the World Bank and Amadou Mahtar Ba (right), President of AllAfrica Global Media and Forum co-covener, looking on.
This Day (Lagos)
By Godwin Haruna

Lagos — Various speakers at the second African Media Leaders Forum (AMLF), which began in Lagos yesterday, have called for an integration of the old and new media in presenting information to the people of the continent.

The debate has been on the front burner over the future of the old media given the rising popularity of the new media, which is also considered to be cost-effective.

The forum hosted by THISDAY and attended by media owners and practitioners from 46 African countries, also urged the industry in Africa to hold their governments accountable.

Speaking before the first session, Chairman/Editor-in-Chief of THISDAY Newspapers, Mr. Nduka Obaigbena, who is also the Founding Chairman of AMLF, said the forum was designed to create a new experience to chart the course of development on the continent.

Obaigbena said the second forum became imperative to build on the outcomes of the maiden conference in Dakar, Senegal last year in such a way that it would be beneficial to practitioners on the continent.

In his remarks, Mr. Eric Chinje, Co-President AMLF and Manager, External Relations of the Africa Region of the World Bank, said the forum was aimed at critical reflection and common problem-solving along with concerted high-profile advocacy for an enabling macro-economic and socio-political environment where media institutions could thrive.

Chinje said the African Media Initiative (AMI) was expected to generate support for the continent, adding that media owners are better positioned to talk about issues involving them.

Ba said the voices should be collectively harnessed and urged them to dare and work together to present African views to the rest of the world.

Speaking in a keynote address on the theme: "What are the Possible Futures of Journalism with the Experience of New Media," former ABC Nightline Anchor in the United States and currently, NPR and BBC senior news analyst, Mr. Ted Koppel, said new technology of Internet does not have the potential to kill the newspaper industry.

Koppel, with about 50 years of journalism practice behind him, said he does not want the continent's media to make the mistake of being obsessed with the new technology as has happened in his country, the US.

While describing citizen journalism as wonderful because everyone has the opportunity to get out information using the new technology, he said because they are not trained journalists, the fear of inaccurate reporting was real.

"Journalism is not about technology; journalism is about reporting, editing and putting things into their proper perspectives.

"I used to tell young journalists in my country that to me, the most enduring message in history was carved into two stone tablets, the Ten Commandments, the symbol of God, the medium clearly was the tablet. The message is so important that it has survived for more than 2,000 years," Koppel said to allay fears that the evolvement of the new media would sound the death knell of the newspaper industry.

He said the polarization of news had drawn a lot of people back to the traditional media, which they had discovered carry verifiable news.

"Journalism depends precisely on putting certain facts here; leaving others out, it requires putting things in context. It requires originality, I shudder to think how many huge mistakes I would have made over the years if I didn't always have an editor or producer to cross-check what I have done," he said.

Speaking during the afternoon session on "Media and Governance: Myths and Realities of a Fourth Estate," co-founder of the renowned Huffington Post, Arianna Huffington, also said the evolvement of the new media was very important to the industry.

Huffington cited the instance of U.S President Barrack Obama, who won his election on the strength of the Internet as a development that has lent credence to the importance of the new media.

She said another advantage of the new media is its ability for instantaneous correction especially as it relates to the polarization in the mainstream media.

She said newspapers and magazines would always be there, but the new media was also very relevant in presenting instantaneous news on the laptop and blackberry, adding that there is virtually no newspaper that does not have a website.

She stressed that contrary to the view that the new media does not have editors, they have editors that work on the stories for them.

Also speaking as a panelist, Chairman, Broadcasting Organisation of Nigeria (BON) Alhaji Abubakar Jijiwa, advocated an interface between the old and the new media in the practice of journalism. Jijiwa said the future of democracy in Africa depended on how the media engaged the new and old media in presenting information to the people of the continent.

In his contribution, CEO, Mail & Guardian, South Africa, Mr. Trevor Ncube, said the legal and constitutional environment remained the biggest threat to the media on the continent.

Ncube said the role of the media was to create a market place of ideas for the people but the vital role was being inhibited by the legal framework in some African countries.

There was also a session on "Media Development: Financing Media Ventures," moderated by CEO Africa International, France, Marie Roger Bilos, where the hurdles faced by media entrepreneurs in securing loans for their projects were highlighted.

Next Story
Tagged:
Copyright © 2009 This Day. All rights reserved. Distributed by AllAfrica Global Media (allAfrica.com). To contact the copyright holder directly for corrections — or for permission to republish or make other authorized use of this material, click here.