Tanzania: President Kikwete - 'Agriculture is Everything' 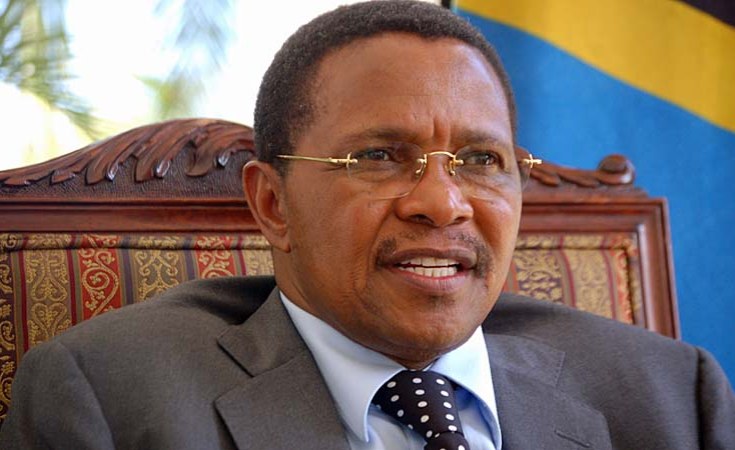 As President Jakaya Mrisho Kikwete of Tanzania was about to leave Dar es Salaam on November 15 to attend the World Food Summit in Rome, he sat down at State House to discuss a range of issues with AllAfrica. One of them was food security.

Since the days of its first president, Julius Nyerere, Tanzania has been known as an island of peace and stability, but it has remained poor.

Kikwete has set out an aggressive program of development since his election as Tanzania's fourth president in 2005, with more than 80 percent of the vote. Economic growth topped six percent in 2007 and was more than seven percent last year, although the global recession has depressed that rate to around five percent in 2009.

The president's international profile has soared during his nearly four years in office. He served a term as head of the African Union, and he was hailed by East African media in February 2008 for playing a key role in breaking the deadlock in negotiations between Kenya's political rivals, following post-election violence that split the nation. At a lunch for African leaders hosted by U.S. President Barack Obama at the United Nations on September 22, President Kikwete was one of three heads of state invited to speak, along with President Ellen Johnson Sirleaf of Liberia and President Paul Kagame of Rwanda. Kikwete outlined specific policies and actions that could promote increased agricultural productivity and lead to more agriculture-led economic growth.

The Tanzanian president's long-term reputation will depend on whether he is able to deliver the benefits of the country's rapid growth rate to its people - or, as the government's poverty monitoring website puts it, to implement policies "to ensure that the pattern of growth is pro-poor and benefits at the macro-level are translated into micro-level welfare outcomes." The country's poverty reduction strategy aims to foster faster GDP growth in rural than in urban areas.

Kikwete is known for spending significant amounts of his time holding discussion sessions with local people in remote rural parts of Tanzania, where nearly 90 percent of the poor population lives. In the development budget, education is the chief expenditure. Next is infrastructure - roads, railways and the other elements of a functioning economy. The third largest expenditure is health care.

Agriculture is the fourth biggest item, but anti-poverty planners see the top four budget lines as closely related and interdependent, with the high rate of infant mortality, for example, tied both to poor health services and nutritional insufficiencies. Similarly, the development plan notes that food insecure households are vulnerable to multiple ills, with women and children often the most disadvantaged. The development target is to increase food crop production from nine million tons in 2003/4 to 12 million tons in 2010.

In a discussion of agriculture during President Kikwete's interview with AllAfrica, he placed the sector at the heart of the country's strategy.

You're headed to Rome for the World Food Summit.

What is your opinion on rural agriculture and how it figures in Tanzania's development?

Agriculture is everything here, because 85 percent of our people live in the rural areas. They depend on agriculture for their livelihood. Many of our industries here are agro-based - cotton ginneries, the textile mills, food processing plants. We think agriculture is critical for us, and we are giving agriculture the due emphasis that it is supposed to have.

When we came to office, we came up with an agricultural sector development program. It is a huge program, a seven-year development program - about a U.S.$2.1 billion program - with the main aim being to modernize our agriculture; increase the use of irrigated agriculture - right now I think it's about two percent only; increase the use of high-yielding seeds. We're not using much of that. We're developing our own capacities to develop those seeds by supporting our research institutions, with two percent of our budget set aside for our research institutes as a whole, and agriculture would benefit from that.

We're not yet there.

Besides that, we've come up with a comprehensive program for subsidies - subsidies for high-yielding seeds, subsidies for fertilizers, for herbicides and pesticides - to make it easier for the poor farmers to be able to get fertilizer and seeds. And it has paid dividends. In the southern highlands, after we increased support for agriculture, we think we're going to get a four-million ton surplus of maize this season.

Will you export the surplus?

We use it for our own consumption, and then the surplus we would sell.

We're also looking at rural infrastructure, improve the roads so that farmers can get inputs easily and, at the same time, make it easy for farmers' crops to get to the markets. This is part of a comprehensive program. Also included in that plan - we want to move slowly from the hand hoe to the oxen plow and to mechanization.

Last year, we suspended buying motor vehicles for the government, and the money that we saved was devoted to getting tractors to our district councils, and then they could sell them to cooperatives of farmers. We created a revolving fund. When they pay back, then we will bring in more tractors. So we agree that for two years, we are not going to buy government vehicles, unless very essential.

We say agriculture is everything. Besides that, we've also been looking at the value additions. We're now trying to encourage the manufacturing sector for agro-processing industries to be established. The new thing which we have done: our agriculture is essentially peasant agriculture; the private sector has not been actively involved - so we had meetings with them, and we agreed now to launch the campaign that has come to be known as 'Kilimo Kwanza' [Agriculture First].

This is a new motto for sensitization, for increasing awareness. It is targeted at the private sector. Let them be big farmers, be involved in agriculture as big farmers. Of course, peasant agriculture is important, but we also need large-scale farmers.

For the private sector to produce, they need to get involved in the production of inputs. We're producing 75 percent of our seeds. Our only weakness has been building capacities for seed multiplication, and for this we need large-scale farms. This is where we want our private sector to participate. We want them to produce pesticides and herbicides.

Agriculture has preoccupied us for quite some time. Of course, the main target here is insuring food security.

Women Politicians Feel Sidelined By Media Ahead of Elections 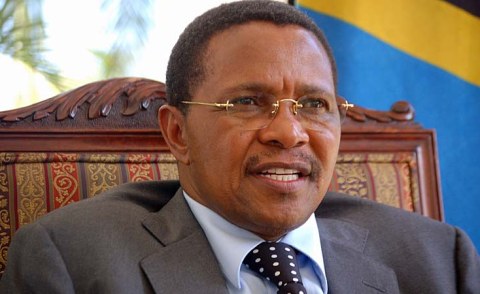 Kikwete Challenger Ahead in Opinion Poll 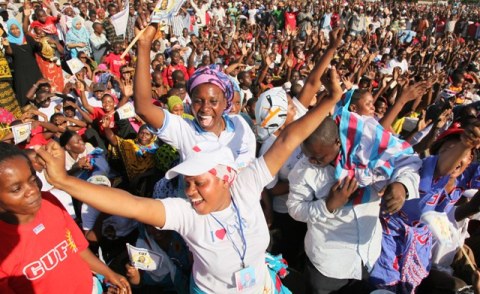 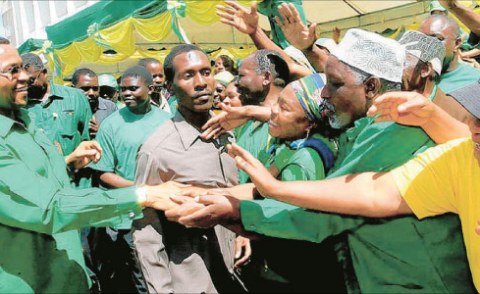 Anxiety Builds Ahead of Tanzania Election Showdown
Tagged:
Copyright © 2009 allAfrica.com. All rights reserved. Distributed by AllAfrica Global Media (allAfrica.com). To contact the copyright holder directly for corrections — or for permission to republish or make other authorized use of this material, click here.