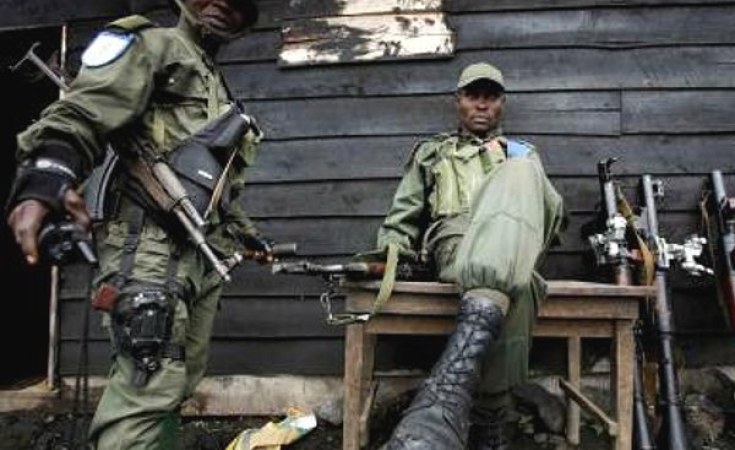 Fifty years ago, the former Belgian Congo received its independence under the democratically elected government of former prime minister Patrice Lumumba. Less than seven months later, Lumumba and two colleagues were, in the contemporary idiom, "rendered" to their Belgian-backed secessionist enemies, who tortured them before putting them before a firing squad. The Congo would not hold another democratic election for 46 years. In 2002, following an extensive parliamentary inquiry, the Belgian government assumed a portion of responsibility for Lumumba's murder.

But controversy has continued to swirl over allegations of U.S. government responsibility, as the reception for Raoul Peck's acclaimed film, "Lumumba," demonstrated. After all, the U.S. had at least as much, if not more, influence in the Congolese capital as Belgium. It was the major financier and political supporter of the U.N. peacekeeping force that controlled most of the country. According to still classified documents that I first revealed eight years ago, members of the Central Intelligence Agency's (CIA) "Project Wizard" covert action program dominated the post-Lumumba Congolese regime. However, a 1975 U.S. Senate investigation of alleged CIA assassinations concluded that while the CIA had earlier plotted to murder Lumumba, he was eventually killed  "by Congolese rivals. It does not appear from the evidence that the United States was in any way involved in the killing."

It is now clear that conclusion was wrong. A new analysis of the declassified files of the Senate "Church" Committee (chaired by Democratic Senator Frank Church), CIA and State Department, along with memoirs and interviews of U.S. and Belgian covert operators, establishes that CIA Station Chief Larry Devlin was consulted by his Congolese government "cooperators" about the transfer of Lumumba to sworn enemies, had no objection to it and withheld knowledge from Washington of the impending move, forestalling the strong possibility that the State Department would have intervened to try to save Lumumba. I detail this evidence in a new article in the academic journal, Intelligence and National Security, vol. 25, no. 2 (The full article is available from the publisher.)

Here, briefly, are the most important new findings:

- Covert CIA actions against the Lumumba government, often dovetailing with Belgian ones, culminated in Colonel Joseph Mobutu's military coup, which was "arranged and supported and indeed managed" by the CIA alone, according to Devlin's private interview with the Church Committee staff.

- The CIA station and U.S. embassy provided their inexperienced and politically weak Congolese protégés with a steady stream of political and military recommendations. The advice arrived both before Congolese government decisions and shortly afterwards when foreign advisers were invited in to offer feedback. Devlin's counsel was largely heeded on critical matters, especially when it came to Lumumba. Thus Mobutu and former president Joseph Kasavubu were persuaded to resist political pressures to reconcile with Lumumba, and Mobutu reluctantly acceded to Devlin's request to arrest him. After both Devlin and the American ambassador intervened, the government dropped its plan to attack U.N. troops guarding Lumumba. And after Lumumba was publicly brutalized by Mobutu's troops, the U.S. embassy – under pressure from the State Department, which was concerned about African governments' threats to pull out of the U.N. force – pushed Kasavubu into promising Lumumba "humane treatment" and a "fair trial."

- In this context of U.S. adviser-Congolese leader interactions, Devlin's decision not to intervene after he was informed by a "government leader" of a plan to send Lumumba to his "sworn enemy" signaled that he had no objection to the government's course. It was also seen that way by Devlin's Belgian counterpart, Colonel Louis Marliere, who later wrote, "There was a 'consensus' and …no adviser, whether he be Belgian or American, thought to dissuade them." Considering Congolese leaders' previous responsiveness to CIA and U.S. embassy views, Devlin's permissive attitude was undoubtedly a major factor in the government final action. (Its last-minute switch of sending Lumumba to murderous secessionists in Katanga instead of murderous secessionists in South Kasai does not change the crucial fact that Devlin gave a green light to delivering Lumumba to men who had publicly vowed to kill him.)

- Furthermore, shortly before the transfer, Mobutu indicated to Devlin that Lumumba "might be executed," according to a Church Committee interview. Devlin did not suggest that he offered any objection or caution.

- Cables show that Devlin did not report to Washington the impending rendition for three days (i.e. until it was already underway), forestalling the strong possibility that the State Department would have intervened to try and protect Lumumba as it had done several weeks earlier. When news came that Lumumba had been flown to Belgian-supported Katanga (but before it became known that he was already dead), a top State Department official called in the Belgian ambassador to complain about Belgian advisers' possible contribution to the Congolese government's "gaffe" and to insist upon the need for "humane treatment."

- The Church Committee failed to uncover the full truth about the U.S. role because of its inattention to the covert relationship between the CIA and Congolese decision makers, CIA delays in providing key cables, and political pressure to water down its original draft conclusions.

Devlin died in 2008 after consistently denying any knowledge of his Congolese associates' "true plans" for Lumumba, and maintaining that he had "stalled" the earlier CIA assassination plot. Yet declassified CIA cables disprove his claims.

One horrible crime cannot, by itself, change history. But the murder of Patrice Lumumba, the most dynamic political leader the Congo has ever produced, was a critical step in the consolidation of an oppressive regime. At the same time, it crystallized an eventual 35-year U.S. commitment to the perpetuation of that regime, not just against Lumumba's followers but against all comers. In the end, Mobutu's kleptocracy would tear civil society apart, destroy the state and help pave the way for a regional war that would kill millions of people.

There can no longer be any doubt that the U.S., Belgian and Congolese governments shared major responsibility for the assassination of Lumumba in Katanga. The young prime minister was an imperfect leader during an unprecedented and overwhelming international crisis. But he continues to be honored around the world because he incarnated – if only for a moment – the nationalist and democratic struggle of the entire African continent against a recalcitrant West.

If the U.S. government at last publicly acknowledged – and apologized for – its role in this momentous assassination, it would also be communicating its support for the universal principles Lumumba embodied. What better person to take this step than the American president, himself a son of Africa?

Stephen R. Weissman is author of "An Extraordinary Rendition," in Intelligence and National Security, v.25, no.2 (April 2010) and American Foreign Policy in the Congo 1960-1964. He is a former Staff Director of the U.S. House of Representatives' Subcommittee on Africa.