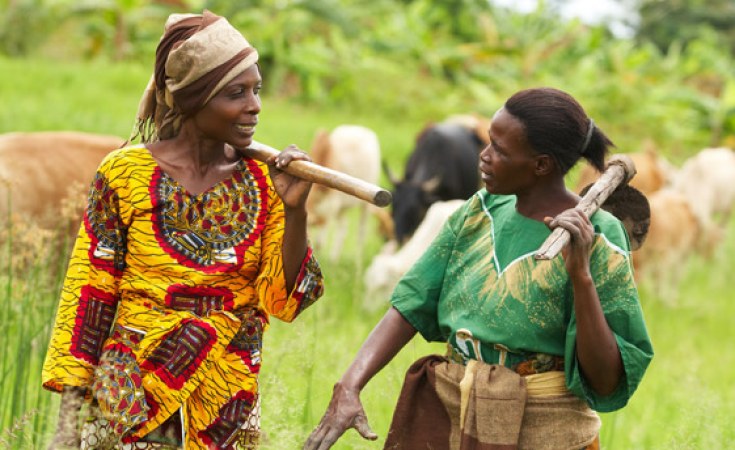 Gates Foundation
Farmers teaching farmers. Mwanaidi Ramadhani (left) is part of a local farmers organization in Mwasonge. Farmers like Mwanaidi have coached more than 1,800 farmers in Tanzania to grow this kind of sweet potato.
allAfrica.com
interview

Critics of foreign aid to Africa say that much of the assistance goes to waste. But author and economist Charles Kenny sees things differently. Kenny, who writes a weekly column for ForeignPolicy.com as "The Optimist," points to improvements in the quality of life for many Africans in recent decades and says the progress is at least partially attributable to development assistance. Kenny is a senior economist on leave from the World Bank and a fellow at the Center for Global Development and the New America Foundation. He spoke to AllAfrica about his recent book, "Getting Better: Why Global Development is Succeeding—and How We Can Improve the World Even More".

There have been some scathing accounts of aid to Africa in recent years, including Dambisa Moyo's book, "Dead Aid." Your book is quite optimistic.

The last few years have actually been really wonderful for Africa and actually it's hard to come up with a thing to be negative about. The Aids crisis continues, although thankfully it appears to be peaking.

Growth in Africa in the last 10 years has been phenomenal. It's been faster than in OECD (Organization for Economic Cooperation and Development) countries certainly. We've continued to see improvements in child health, adult health, literacy, education rates, civil and political rights and so on and so forth. We've just seen really widespread progress.

Aid is not primarily responsible for that. The actions of African people themselves is primarily responsible for that. But aid has played a role in some places. For example, we've seen a dramatic role-out in access to vaccines, partially financed and supported by aid programs. That's slashed by about three-quarters the number of Africans who die of measles each year, for example. [There are] some really impressive changes in the quality of life in Africa, some of which have been supported by aid.

In your book you say income is only one measure of success. Can you tell us about some of the other measures and how those stand up in Africa?

We're seeing improvements in literacy. Literacy rates in Africa have almost doubled since 1960. The number of people in Africa dying in wars is at pretty much an all-time low, at least since we have statistics going back to the 60s. Civil rights, human rights, war deaths, deaths from other causes, literacy and education – Africa is doing better than it ever was before. And the great news is that over the last 10 years income has also picked up across large parts of Africa. So it's a very broad-based story of progress.

Economists like Dambisa Moyo can't be completely wrong in their assessments. Where do you see them making good points?

Undoubtedly a lot of aid is wasted. And a lot of African governments waste both aid resources and their own money, or at least a considerable part of it. I'm not claiming that there's no corruption problem in Africa or the continent is perfectly governed. Far from it. There's a huge way to go.

If you follow some of these surveys of what happens to financing as it goes through levels of government in Africa it can be quite depressing. In Niger the amount of money that leaves the treasury for health purposes that actually gets to front-line clinics is actually two or three or four percent. It's very small. Most of it goes to bureaucracy and waste in the middle levels of the health ministry. It's not that things are perfect in Africa – far from it.

But the mistake that people like Dambisa Moyo make is they see a lot of waste and they see that things could be run a lot better and they say, 'It's all rubbish and we should just give up on all of it,' and it's not true. Even though African governments are quite often corrupt and inefficient, they are still providing a quality of service way higher than European countries were [providing when they were] as poor as African countries are today. They're still managing to get vaccines to the majority of their citizens, they're still managing to educate the great majority of their kids, somewhat, get them into school. While there are serious problems that need fixing, the aid and African governments work well enough to have fostered a huge improvement in the quality of life in the last 40 or 50 years.

How would you suggest making aid more effective and efficient?

I think there are a lot of exciting new approaches to ways to spend aid money effectively. The simplest one being just give it to poor people. There's a wonderful book that came out last year that's called, 'Just Give Money to the Poor' and I think there's a lot in that.

There are things like cash-on-delivery aid. This is conditional cash transfers to governments. So the idea is you make an agreement with governments that for every extra kid they get to complete a course of primary education and take a test at the end of that you'll pay the government some number of dollars. You don't interfere with how they do it, how they get the kids into school, how they keep them there. All you do is you pay them for results.

I think that's a powerful new approach to both improve the quality of African governance, because you're putting African governments in charge of how to achieve these objectives, but also make sure your aid dollars get results. You only pay if more kids are in school.

So I think there are a range of different approaches to aid that could increase effectiveness further and I think that would be a wonderful thing.

Do you think some of the negativity surrounding aid to Africa has had an impact on international commitments for assistance?

Happily, the last 10 years have seen aid to Africa increase markedly. Aid in general has gone up by about U.S.$50 billion since the start of the last decade. And aid to Africa took a larger percentage of a larger pie. So aid to Africa doesn't seem to have slowed down yet.

But we're seeing many countries facing really serious budget problems at the moment and it's likely that at least in some countries we will see aid drop back. Although it's heartening how many countries have said they're not going to let aid fall even while making painful cuts in other parts of the budget, and that's much to be welcomed.

One thing in my book is what's behind this widespread progress.  Although Africa has actually seen income growth in the last 10 years, in the 20 years before that Africa didn't see very much income growth at all. And yet even during that period we saw improvements in health and education and so on.

And so one of the things the book is quite clear on is it is not income that is driving the progress in broader measures of the quality of life. It's actually two things: technology and ideas. So in health it's easy to see the role of technology. Vaccines, for example, things like oral rehydration therapy. Very simple approaches that have a massive effect on life expectancy, on health. The other side is ideas, actually spreading ideas such as it's important to wash your hands after you've gone to the toilet.

It's a very important part of the change in education outcomes in Africa that it's the new norm that you should send girls to school. It's no longer considered a strange thing. That's one of the factors behind the huge progress in enrollment rates for girls across the continent.

The great thing about technology and ideas [being behind progress] is it suggests you don't have to wait for Lesotho to become a Luxembourg in order to have quite a high quality of life in Africa. At the moment income is going the right way in Africa but even if that was to slow down it doesn't mean we have to slow down progress and quality of life if we focus on coming up with new technologies, new vaccines, solar lamps, or cheaper ways to make glasses, all sorts of things. And if we keep on focusing on spreading important ideas we can make progress, income growth or not.

How about mobile technology?

It's hard to measure yet its effect on things like health and education. But clearly there are a lot of really exciting applications out there – Mpesa in Kenya is a great application connected to finance – so I think surely it's had a big development effect across a wide-ranging area.

Another thing I'd say about the mobile phone: Africa is full of families that live apart from each other. Some are in the cities while the rest are in villages, or migrant workers in South Africa while the rest are in neighboring countries and so on and so forth. That the mobile phone makes it easier for families to remain in contact is not something that is going to appear in the GDP statistics but surely is really important for quality of life.

It's just wonderful that this technology is out there. I think you can say that of a number of technologies. You may not see them in the GDP statistics but they mean that living life in Africa today is just a lot nicer than it was than living in Africa 50 years ago. It's a hugely uplifting story.

How about the role of democracy and good governance in progress?

Both of those things are good in their own right but over the long term you'd expect to see stability and democracy are two things seen in the long term to lead to better outcomes across a whole range of measures, from health and education to income.

So I'd say there is a virtuous circle: Education and health are also a factor behind lower rates of violence and spreading democracy. So if we can continue this virtuous circle that would be wonderful and all the signs are showing that we can.