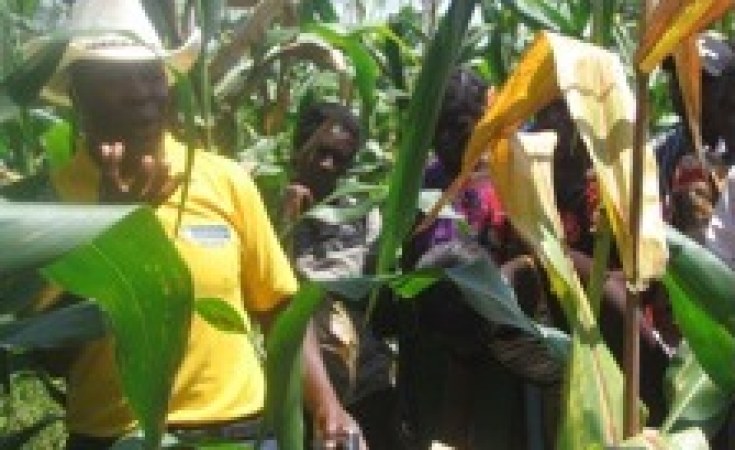 A herder shepherding his animals in Zambia's Eastern Province winds up a solar-powered radio and crouches down to listen to a local FM station. The news broadcast includes a warning that a severe storm is approaching his village. The herder reacts instantly, finding shelter nearby for his animals, which later emerge from the storm unscathed.

Such a scene may be played out increasingly in the future across Africa, where the livelihoods of rural inhabitants are critically dependent on weather and climate. Most are peasant farmers who depend solely on rain for their crop production. A single extreme event such as a major flood or prolonged drought can not only cause loss of life, but also economic setbacks equivalent to years' worth of development.

As climate change intensifies, bringing more extreme weather, as well as seasonal and longer-term changes, effective adaptation for rural regions of Africa will depend on timely and accurate advance information. Early warnings will enable farmers to shelter their animals and protect their income and families. In addition, the collection and distribution of local rainfall information can help smallholder farmers to adjust their crop production methods to changing seasonal precipitation patterns.

The Zambian government has been one of the first in Africa to recognize this need. Through its RANET (Radio and Internet for the Communication of Hydro-Meteorological Information) Project, the Zambia Meteorological Department is tapping remote communities across several provinces to collect climate information. In the past four years, some 3,060 farmers have been provided with rain gauges to take rainfall measurements which are then fed back to the meteorological service's local weather stations through mobile phones. Farmers are also encouraged to report other local weather observations. To motivate farmers taking part, RANET periodically recharges their phones with free airtime, and project managers are now testing the FrontLine SMS software to help minimize the service cost. This would enable rural participants to send SMS messages to the RANET centre free of charge.

The results have been so encouraging that the Zambian Met Office is now considering providing automatic weather stations and rudimentary meteorological training to rural farmer cooperatives across the country.

So far the project has helped launch five stations, with two more in the pipeline, and is cooperating with another nine. Each station can broadcast information to farming communities within a radius of 40-60km. RANET has also installed 49 digital radio satellite receivers to enable the FM stations to access satellite-based weather and climate information.

The project provides communities with solar wind-up radio receivers to access the broadcasts, 3,000 of which have been distributed across rural regions to date. The stations also host programs that help educate citizens on the effects of weather on their crops. Reinforcing these messages, RANET also provides climate information to agricultural extension workers who can interpret it for farmers and help them apply what they learn in their daily farming activities. In Mali, similar weather forecast bulletins, broadcast every 10 days, have helped low income smallholder farmers to increase yields by providing vital information on when and what to plant, depending on the climatic conditions.

While community radio broadcasting struggles to survive commercially, and therefore depends on government and non-governmental organizations to sponsor their programs, this is worthwhile investment. Quite simply, radio broadcasting is the most cost-effective and cheapest way for information dissemination and education, and can play a valuable role in societies facing climatic extremes.

Not content with radio and cell phone networks, RANET, with support from the USAID Office of U.S. Foreign Disaster Assistance, is also piloting the deployment of an innovative communication device called Chatty Beetle. The device is both a terminal and a system (see picture) designed to provide emergency weather alerts and instructions to remote locations with limited means of communication with the outside world. It sends messages and short status reports (of 160 characters or less) via a small screen between emergency managers and warning authorities, as well as notifying communities of potential hazards. Since speed is critical when warning vulnerable communities of the onset of disasters such as cyclones or major floods, the Chatty Beetle, which transmits even faster than the Internet, shows much promise.

With more than three quarters of the world's population now served by mobile networks, and additional efforts underway to reach the rest, the RANET approach to climate and emergency preparedness information has huge potential for scale up.

The World Resources Report 2010-2011 will be published in August and can be read here.

Riedner Mumbi is a consultant on the RANET system. Polly Ghazi is a writer and editor at the World Resources Institute (WRI).

Tagged:
Copyright © 2011 allAfrica.com. All rights reserved. Distributed by AllAfrica Global Media (allAfrica.com). To contact the copyright holder directly for corrections — or for permission to republish or make other authorized use of this material, click here.