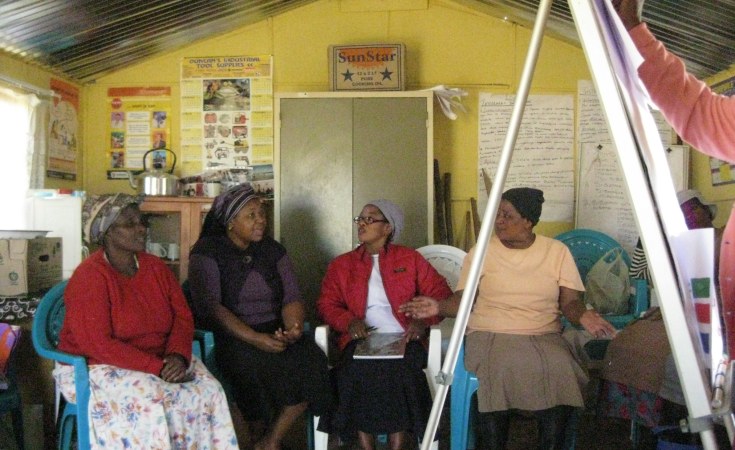 Durban — Bongiwe Dlamini thinks back to the financial crisis she faced a few years ago, a time when she was so deep in debt that she could not even buy for groceries for her family.

"I got to a point where I would borrow money from loan sharks," she said. "What could I do? It was for my children's education, for things like school uniforms and fees, even for the smallest things you can hardly do without, like salt."

She reached a point where she found herself borrowing ever more cash, often in order to pay back the first loan she took from the original loan shark - and all at rates of interest as high as 60 percent.

Dlamini commiserated with a friend, Thandi Africa, who was also deep in debt. Africa said she could no longer cope with the endless cycle of borrowing, nor with the demands from loan sharks to repay on time.

Then Dlamini and Africa heard about the work of a local community group led by Fisani Zondi.

The two women knew Zondi as a community activist and a lay preacher around their village of Table Mountain in South Africa's KwaZulu Natal province. They found out that she had taken a new job as a field officer for a South African non-profit organization called SaveAct. With only 10 percent of the world's 2.5 billion poorest people estimated to have bank accounts, SaveAct was founded in 2005 to help people living on the poverty line to save the little money they have.

"We were in trouble so we went to Reverend Zondi, who told us about SaveAct," Africa said. "We joined and she told us how we could get a savings group together with our neighbours, who were also having money problems."

Nearly 10,000 people are members of SaveAct groups in two of South Africa's poorest provinces of KwaZulu Natal and the Eastern Cape. With up to 25 members each, the groups are run by rules and procedures that involve careful monitoring by field officers, who give tips on basic financial practices.

"Our job is to educate people so that they can start saving," said Zondi, who mentors 75 savings and credit groups in rural KwaZulu Natal. "Our role is to go to the groups every month so that we make sure everything is on track."

Another SaveAct field officer, Simella Mdlangathi, said the group educates people about how to manage their money. "We teach them that they shouldn't just go to town and buy until they find they are stuck," she said. "We show them how to prioritise their needs, to look at special offers so they can try and make savings from the money they allocated for groceries, and even come home with a bonus - a bit of money that they can now save."

A member of one of the savings groups Zondi mentors, Samkelisiwe Dlamini, feels that she has learned a lot about managing her finances.

"I used to get money and I would waste it on unnecessary items," she said, "but now I know how to save."

In many ways these savings and credit groups are like traditional African "stokvels", as these community savings clubs are known in South Africa. Stokvel members contribute a fixed sum of money each month and they take turns receiving the pool of funds.

Zondi has seen problems with the way in which stokvels are run and regulated. "In some stokvels people run away with other people's money," she said. "Then they come with fights and jealousy."

Members of SaveAct's groups buy shares at their monthly meetings, with each share costing from U.S.$7 to $14. They can purchase between one and five shares at each gathering.

Each group elects a chairperson and a bookkeeper who, along with the field officer who attends a new group's first meetings, keeps records in each member's "share book". They also elect key-holders. The group's savings are stored in metal boxes that are locked up between each meeting and can be opened only when key-holders are present.

Members can take small loans at a rate of interest determined by each group's constitution. The rate is usually 5 to 10 percent, far lower than those offered by the loan sharks. SaveAct loans are normally repaid in three to four months.

The overwhelming majority of these savings and credit group members are women, whose main source of funds is the government's child support grants for those below the poverty level - which are set at the equivalent of $38 per month per child. Other members depend on disability and foster care grants, as well as government pensions.

"From that grant money I have to make sure I get everything done," said savings group member Mavis Zondo, "from the groceries to the saving as well."

Most members of Zondi's savings group are single mothers raising children. Many are among the 25 percent of South Africans who are unemployed, and the same goes for their husbands and male partners.

"The men all do small jobs, maybe twice a week," said savings group member Thabisile Dladla. "But none of them have permanent jobs."

Dlamini tries to supplement her social grant by working in the informal sector.

"I sell chips, biscuits and sweets outside a school that's near me," she said. "It doesn't earn me much, but from the profits that I make I use a little bit to save each month."

She tries to buy savings shares at every meeting. This means sacrificing a bit each month but Dlamini said, "I don't mind as I know it will come in useful at the end of the year." This is when the groups complete their year-long savings cycle and pay each member "share-out" monies, according to how many shares they have accumulated over the year, along with any profits from interest on loans to members.

Profits earned by groups average about 40 percent per year and can be as high as 80 percent, according to Annie Rose Barber of the University of Bath in the United Kingdom, who has conducted extensive research among SaveAct members in the Eastern Cape province of South Africa.

Her report shows that the savings and credit groups definitely make a difference in members' lives, with individual members usually collecting from $90 to $350, in savings and loan interest, over a year's saving cycle.

After three months of conducting interviews in the Eastern Cape, Barber concluded: "The impacts are tangible; I could see them with my own eyes. Straight away what strikes you is the home improvements: people have managed to buy stoves and heaters, repaired leaks and ceilings, extended rooms."

"Thanks to my savings group, I renovated my house," she said. "It was falling apart as it was built using only mud, so I rebuilt it using cement and I can safely say my house is now beautiful."

Barber also aimed to find out whether savings and credit group membership strengthened the coping strategies of people affected by HIV/Aids. Her conclusion was a resounding yes.

"I could see that the families of group members are now able to eat a more nutritious diet," she said. "They don't have to go hungry or borrow from neighbours to put food on the table."

Barber says that the positive experience of saving has also had an effect on relationships, especially with members' husbands and male partners. She feels that this could be a result of the boost in members' self-confidence.

"One hundred percent of the people I interviewed reported feeling more confident," said Barber. "Instead of feeling that they have no agency in their lives, suddenly they have a practical outlet, so they can achieve their goals."

Barber believes this confidence is largely because none of the money used by the savings groups is externally provided, so the members have a strong sense of doing something for themselves with their own resources.

SaveAct provides only the savings books and initial supervision. After the third meeting the groups are left on their own, with the field officer returning for the first "share-out" of the money saved at the end of the year-long savings cycle.

Zondi reports few problems in her work as a SaveAct field officer.

"There are some people who borrow a lot of money and don't pay it back," she concedes, "But in our training we advise members only to borrow up to three times the amount of money they have in their savings book."

"Now I am in control of my life, now I can plan for the future," are comments that Barber reports hearing frequently from members of savings and credit groups.

"Being a member of SaveAct has helped me immensely," enthused Nongile Khulu, from the village of Matatiele, where the NGO's Eastern Cape office is based. "My children and I go to bed fed, and I have even been able to build a hut from the money I've saved."

Barber's South African case study was commissioned by the Rome-based journal, Universitas Forum, and Finmark, a trust set up in Johannesburg by the UK Department for International Development (DfID). The study was conducted under the supervision of Susan Johnson, an international development expert at the University of Bath who recently researched financial services for the poor in Kenya and Uganda.

"By providing a formal savings mechanism for poor people this model challenges the myth that 'poor people can't save'," concludes the report. "In fact, poor people save more frequently than any other group, precisely because they must. "

Dlamini and Africa often think back to the time when they were drowning in debt to loan sharks, and are glad they joined their savings group.

Smiling, they said, "We definitely sleep better at night."