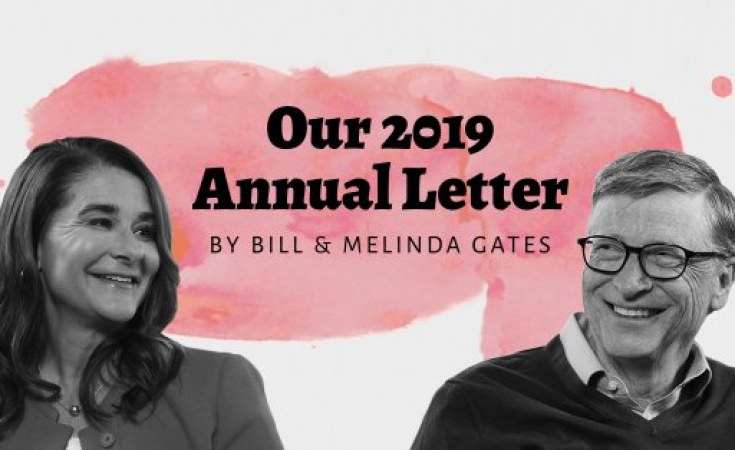 @gatesfoundation/Twitter
The Twitter image associated with the annual open letter by Bill and Melinda Gates.
allAfrica.com
By Tami Hultman

London — Melinda Gates wants you to know this: if women in poor countries can get the contraceptives they want, millions of lives will be saved.

She questions why modern contraceptives should be controversial, when they can reduce a staggering death toll. "We have 100,000 women who didn't want to get pregnant who die in childbirth. We have 600,000 babies, where mothers say they didn't intend to get pregnant and their child dies - every single year!"

Over 350,000 women and three million babies – mostly in developing countries – die annually from complications related to pregnancy and giving birth. "It is a health crisis," Gates says. "It's a life-and-death crisis for these women."

Research supports her. A study of 172 countries published in the current issue of the medical journal The Lancet says that although bleeding, infections and other problems are the leading causes of mothers dying during pregnancy and childbirth in developing countries, "family planning is the primary intervention to prevent maternal mortality."

The Lancet study says family planning – partly by spacing children – probably already prevents about 270,000 maternal deaths annually. In the same issue of the journal, however, the prime ministers of Rwanda and Ethiopia note that more than 40 million women in sub-Saharan Africa would like to stop or postpone childbearing but have no means to do so.

This month's London Summit on Family Planning - hosted by the United Kingdom's Office for International Development (DfID) and the Bill & Melinda Gates Foundation – aimed to address that disparity. Organizers said that providing contraceptives to an additional 120 million women will save the lives of 200,000 women and three million babies and will reduce abortions by 50 million over the next eight years.

British Prime Minister David Cameron addressed the high-profile gathering, sharing the stage with the presidents of Rwanda, Uganda and Tanzania. African first ladies, like Dr. Christine Kaseba Sata of Zambia - an obstetrician and gynecologist - joined the former president of Ireland, a dozen ministers of health, leaders of civil society and faith-based organizations, and the heads of official development entities of Britain, Australia, Denmark, France, Sweden, Norway, Germany, the Netherlands, the United States and the European Community.

Cameron announced that Britain would double its spending on family planning to over £1 billion over the next eight years, saying the increased aid will save the life of a woman or girl every two hours. In all, Summit attendees pledged $4.6 billion in new money for family planning, nearly half of it from developing countries.

Outside the Queen Elizabeth II Conference Centre where the Summit was held, lone protestor Christopher Shell stood in the rain, holding a sign that said, "Baby Killers' Conference." He was not, however, alone in criticizing the Summit's agenda.

Cameroonian George Wirnkar of Human Life International wrote in the Washington Times, a conservative newspaper, that "African babies are not the threat." Gates, he wrote, "apparently sees only an obstacle to economic progress in Africa's children."

Other critics raised concerns from a different perspective. Francoise Girard of the International Women's Health Coalition wrote that unless family planning programs develop ways to measure human rights, "they will send a clear message that the human rights of women are a distraction, and that something else is more important – controlling that pesky African fertility, perhaps?" She said civil society must hold governments accountable, lest they violate women's rights.

On the other hand, African women attending the Summit, including grass-roots activists, health ministers, research scientists and physicians, strongly favored the initiative.

Ghanaian Theo Sowa, head of the African Women's Development Fund, said the Gates Foundation's plan to enable women to choose contraception is a profoundly pro-life approach. She said governments should be held accountable for not spending the resources to deliver family planning services – which "they know can save women's lives, can save the lives of their own citizens."

Mid-way through the day-long Summit, Melinda Gates sat down with four journalists to explain why the foundation she co-chairs will spend more than a billion dollars between now and 2020 to expand contraceptive access.

Gates is a Catholic. Her church opposes use of modern contraceptives, as do many Christian and Muslim communities across Africa. But she said she believes many people of faith can embrace contraception as a way to save the lives of women and babies while, at the same time, reducing the number of abortions.

"One of the things we have to be clear about," she says, "is that what we are talking about is contraception – and not attaching the piece of abortion to that discussion. This is squarely about contraception. All the money being raised is about that."

She believes traditional objections to modern contraceptive methods among many faith communities can be overcome. She said she had just come from Niger and Senegal, where she met with several Imams - Muslim religious and prayer leaders.

One young Imam told her how his own views had been changed by personal tragedy: "Even though scholars told me that family planning was allowed in the Koran, I wasn't sure what I thought. But I lost my wife when she was giving birth to our second son and the son lived and she died. I now go out and talk to all the other Imams that I can meet and say this is part of what we should spread for women."

Gates says decisions about family planning must be put into the hands of women, not imposed from above, and that faith-based organizations can help make that possible. "I think when you get the religious organizations themselves talking to their members, whether it is the Christian-based groups or the Muslim-based groups – it has to come from them," she says.

Kay Warren, co-founder of California's Saddleback Church, attended by over 20,000 people weekly, is an evangelical Christian who categorically opposes abortion, because "at the core of what I believe as a Christian is that every life matters." At the same time, she supports making contraception available. "The issue of access to family planning is certainly controversial," she acknowledges, "but as someone who used family planning in my own pregnancies, I would be a complete hypocrite if I said that other women around the world shouldn't have access to family planning."

Melinda Gates says that failure to provide that access for poor women "was an enormous mistake on behalf of the global health community. It became controversial, and so people lost courage. They forgot to say that this is actually the right thing to do for women."

She worries about the number of teenagers she sees in her travels, who "are giving birth way before their bodies are ready to do it." A new report from Save the Children and the Overseas Development Institute says pregnancy is the leading cause of death among adolescent girls in developing countries, and that 90 per cent of them are married.

The report says teen mothers are twice as likely to die from complications of pregnancy as mothers in their 20s, and that the risk is four times higher for girls under 15. It says babies born to young mothers are also much more likely to die.

Despite the multiple challenges and constraints – of financial resources, of health workers, of cultural factors, of women's lack of power in the family – Gates is optimistic. She mentions programs in west Africa that educate husbands and in Ethiopia, which has trained 30,000 community health workers to deliver services to remote villages. She talks about programs that keep girls in school longer.

Gates says media can report promising initiatives to a global audience, which can help protect international assistance budgets. "I don't think it's always easy," she says, "but I think media stories that emphasize where we are more similar and what the solutions are, I think it would help a lot."

For women in Europe and women in the United States, she says, "what we have to try to do is connect them to the power of those stories and to help people understand that an African mother, a Chinese mother, an Indian mother cares as much about her child as a woman from Norway or France or the U.S. it's all the same. That feeling of how you feel about your baby is the same. I think sometimes we don't connect to that in the way that we should."

Leaders like Theo Sowa, Gates says, correctly call attention to what should be at the center of all family planning programs. "She's fantastic," Gates says. "Her whole point is that there are great women on the ground in communities doing work, and we need to help support those women. I think she's absolutely right."

RELATED: Expanding Contraceptive Use to Save Lives