Liberia: Mental Health Services - Building From the Ground Up 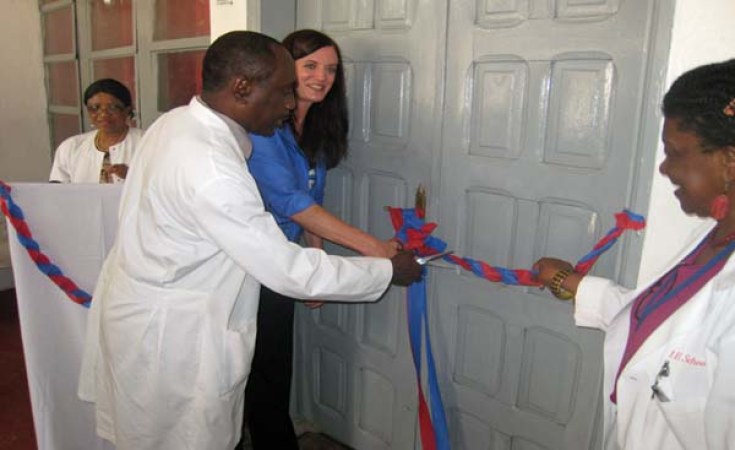 Boakai Fofana/allafrica.com
Cutting the ribbon to the refurbished under-five ward at the JFK hospital.
ThinkAfricaPress
By Travis Lupick

By establishing centres in each county, training health workers and earmarking funds, post-war Liberia is trying to tackle its widespread mental health problems.

Monrovia - One day in 1989, Sidney Flomo started walking. He says he didn't have a purpose or even a direction. He simply travelled aimlessly, sometimes boarding buses, but usually moving on foot. Nearly two decades passed that way. "So many years lost," reflects Flomo at a health centre in Liberia's capital Monrovia.

At roughly the same time Flomo fell ill with schizophrenia - the diagnosis that was finally made in 2007 - Liberia entered 14 years of civil conflict that left 250,000 people dead and the country's infrastructure destroyed. The few mental health services that did exist before the war were lost. Mentally ill people such as Flomo - who are often ostracised by their communities on account of stigma associated with diseases people don't understand - were largely left to fend for themselves.

Flomo survived the war and eventually found treatment and counselling at E.S. Grant Mental Health Hospital, the only inpatient facility for people with mental disorders in all of Liberia. Today, he is married and a father, he has a job as a database programmer, and he plans to pursue a university degree. Flomo also works at Grant Hospital as a part-time counsellor. "Those of us who are mentally ill and are taking treatment, we are as normal as anybody can be," he tells Think Africa Press.

Statistically, Flomo was lucky to find the care that he did. According to the Liberia National Mental Health Policy (MHP), only 15% of people in low-income areas who require assistance with a mental disorder receive it. The document adds: "The situation in Africa today is even worse and more alarming than a few years ago."

For Liberia, the burden is especially heavy. A 2008 study conducted by members of the American Medical Association found that 44% of Liberian adults displayed symptoms of post-traumatic stress disorder (PTSD). Yet according to the MHP, there are virtually no qualified mental health workers in the country. Similarly, a 2008 report drafted by the World Health Organisation found that there are only 0.06 mental health professionals per 100,000 people in Liberia.

Faced with this uphill struggle, Liberia's Ministry of Health and Social Welfare is in the early stages of a push to significantly increase access to mental healthcare throughout the country. Working with the Carter Center, Doctors of the World (MDM), and other partners, the ministry plans to establish a 'Wellness Centre' in each of Liberia's 15 counties. These facilities will be staffed by health workers trained to identify and manage mental illnesses; they will act as referral centres for more serious cases that require the attention of specialists in Monrovia; and eventually, each Wellness Centre will have 4-6 beds for inpatient care at locations in Liberia's more remote regions.

The first of the centres - Phebe Wellness Centre - opened its doors to residents of Bong County in January 2012. A second, in Grand Gedeh, is scheduled for a September 2012 inauguration. And a Wellness Centre for Sinoe County is on track to follow shortly after.

Dr Janice Cooper, head of the Carter Center's mental health project in Liberia, explains that with limited resources, this expansion of services is only made possible by employing a healthcare strategy known as 'task shifting'. "We will never have enough psychiatrists in this country to meet the needs," she says, "but we know that a lot of work that psychiatrists do can be done by lower levels of workers with specific training. So the idea is to take that specialised training that psychiatrists receive and put it in the hands of mid-level practitioners, and in some cases, lower level cadres".

Cooper notes that task shifting is an approach that has proven effective in managing physical diseases in developing countries, and maintains that the same can be done for mental health. To that end, the Carter Center is two years into a five-year programme that aims to train 150 mental health clinicians for Liberia. 63 health workers have already completed the centre's six-month course, which includes lessons on psychiatric illnesses, medical management, and psychosocial interventions such as behavioural therapy.

"We also train them as teachers," Cooper adds. "We train them to train other nurses and lower cadres of workers." She emphasises that the goal is decentralisation, and taking mental healthcare services beyond the nation's capital. Cooper recounts cases where families have had to bind and gag relatives suffering psychotic episodes and travel with them across the country to Grant Hospital in Monrovia. She maintains that with properly-staffed Wellness Centres in each of the counties, such situations will be avoidable.

At C.B. Dunbar Hospital in Bong County, approximately 166 km north-east of Monrovia, Dakemue Kollie recounts how people call him "Crazy Man's Friend" or "Crazy People Doctor", which they shout when they see him coming. "It's because most of the time they see me with people who are mentally ill," he says. "It doesn't bother me....It will change. It just needs time."

Kollie, mental health coordinator for Bong County, lists the challenges he faces caring for the mentally ill in a rural area. Transportation is often difficult and drug supplies are inconsistent. In addition, few health workers in the area are trained to treat or even identify mental illnesses.

On top of his work at C.B. Dunbar Hospital, Kollie says that he divides his time between 16 clinics spread out across the county. He notes that with those facilities lacking mental health specialists of their own, patients wait for his visits and even line up in anticipation. According to Kollie, the situation has improved since Phebe Wellness Centre opened in January, but he notes that Phebe has yet to begin inpatient care. When a mentally disturbed individual requires an overnight stay, the burden falls on C.B. Dunbar Hospital, and stretches thin resources there even further.

At the Ministry of Health and Social Welfare, Dr Meiko Dolo, director of mental health for Liberia, says that an expansion of services is happening. She notes that a draft of the national budget for 2013 (yet to be passed by the legislature) includes an allotment specifically for mental health for the first time in the country's history.

On a tour of Phebe Hospital and its new Wellness Centre, Dr Joshua Tugumisirize, one of only two psychiatrists currently practicing in Liberia, conceded that there remains much work to be done. He says that funding is always a challenge, and notes that mental health has never attracted as much attention as communicable diseases such as malaria. "It is not that we don't care; it is that somebody must pay for that care. Somebody must provide the resources," he adds. At the same time, Tugumisirize expressed optimism for the beginning of efforts to move mental healthcare into rural areas.

"Liberia has literally no formal infrastructure for mental health services," he says. "They are at the bottom of the ladder. But they are trying to take the first step and I am proud to say that I am part of that exercise."

Travis Lupick is a freelance journalist currently living in Monrovia, Liberia. His work has appeared in al Jazeera English, the Africa Report magazine, and Canada's Toronto Star. You can follow him on Twitter at @tlupick.