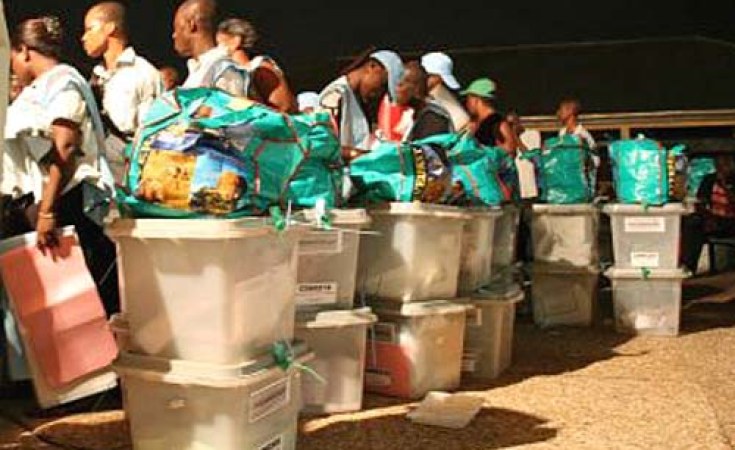 The December elections may prove to be one of the sternest tests faced by Ghana's electoral commission.

Ghana's Electoral Commission has proven robust in trying circumstances in the past. But the coming elections this December may test its capabilities like never before.

A re-drawing of constituency boundaries has provoked cries of foul play and, although lauded in the past for impartiality, the electoral commission faces difficult challenges.

The commission's chairman, Kwadwo Afari-Gyan, has previously been widely praised for his integrity and steeliness. Indeed, he had planned to retire after the 2008 election but was persuaded to stay on.

In the build up to polling day, one issue is dominating above all else - the electoral commission's introduction of 45 new constituencies. In theory, the rationale behind this is simple. The commission has full constitutional authority to alter constituency boundaries after an appropriate review, and the new boundaries, while not perfect, aim to equalise the population size of different constituencies.

However, the constituency review has been widely challenged, with the most compelling criticism focussing on its timing. It was only at the start of October that parliament - by an 81-56 margin, with a large number of MPs abstaining - confirmed the parliamentary elections will be fought on 275 constituencies, up from 230. As opponents have pointed out, it is almost unprecedented for changes in electoral rules to occur so close to election dates unless dishonourable motives are at work. We need only look back to Kenya's 2007 elections and the disruption within the Kenyan Electoral Commission in the months before the vote for such an example.

But is such criticism fair in the case of Ghana? Afari-Gyan, after all, has displayed his commitment to democracy over 20 years; a 'rigger' he is not. But it does seem true that, as is the common complaint, he has become increasingly obstinate and unwilling to listen to constructive criticism. Even if the motivation behind the creation of 45 new constituencies is above question, the same is not true of the implementation and presentation of the policy.

From a purely practical point of view, for example, the timing has been challenging for parties who must develop the organisational capacity - and in some cases, find suitable candidates - in time to fight an additional 45 seats.

Particularly worryingly, however, has been the fact that the reaction to Afari-Gyan's plans has been profoundly polarised along party lines. While the ruling National Democratic Congress (NDC) has largely supported the redrawing of constituency boundaries, the opposition New Patriotic Party (NPP) have not been shy to cry 'gerrymandering'.

At a press conference last month, Afari-Gyan addressed concerns, speaking for three hours in which he emphasised that the commission had done more preparation for the constituency changes than they are normally afforded credit for. His reassurances appear to have worked to an extent.

It is fortunate he has developed such a bank of goodwill due to his shrewd and impartial handling of previous elections. Without this to fall back upon, allegations would have been taken more seriously, and the attitude of the NPP towards the changes may have moved from opposition to outright confrontation. As it is, there remains the sense that the election should still fundamentally pass as normal; the NPP's decision to contest all 275 constituencies, rather than boycott the newly created 45, is highly encouraging.

Also promising is that the electoral commission has gained attention not only for its controversial constituency re-drawings, but also for its new text service. In a bid to ensure the voter register is as accurate as possible, the commission launched a system whereby voters can text in and, for 1 Ghanaian cedi ($0.40) check whether their voting details are correctly logged.

Some who used the service complained to Think Africa Press that the text confirmation was slow or had not come at all, and others criticised the fact the service stops almost three months prior to the election, but programme nevertheless marks a useful - if currently imperfect - innovation.

So where does this leave the race? The US Ambassador to Ghana recently spoke of how the Ghanaian elections would "mirror" those of the United States. Although he was referring to the freedom to vote, his words could also have concerned the political context of the elections. For, rather like in the US, Ghana's incumbent is on course to win a close election despite an economic record criticised by many. Of course, the comparisons are far from perfect - least of all the fact that the Ghana's president, John Mahama, has only been in office since John Atta Mills passed away in July.

It is widely acknowledged that Mills' death has increased the chances of the NDC retaining control of the presidency. As well as the potential phenomenon of the sympathy vote that is well-known to political analysts, Mills' death may also have damaged challenger Nana Akufo-Addo by drawing attention to his age.

Aged 68, Akufo-Addo was actually born a few months before the late Mills, and would be almost 77 by the time he completed two presidential terms. That Mahama is almost 15 years younger allows him to present himself simultaneously as a youthful, anti-establishment challenger - especially considering Akufo-Addo has family ties to three of the "big six" founding fathers of the nation - as well as the respected incumbent. It could well prove to be an effective - if slightly paradoxical, especially given that Mahama's father was an MP - election-winning mix.

One intriguing possibility is that the presidential and parliamentary elections will be won by different parties. But rather than leading to American-style paralysis, such an outcome could prove beneficial in Ghana. Differences between the two main parties do exist but arguments tend to be based on matters of competence rather than ideology.

Moreover, a common criticism of both the ruling NDC government and the 2001-09 NPP government that preceded it was that too much time was spent investigating corruption charges of their predecessors. 'Cohabitation' might present a challenge in the fight against corruption, but could lead to a higher quality of governance.

But that is for later. For now, Ghanaians are more concerned that the election passes peacefully. After the experience of 2008, there is ample room for cautious optimism - but the electoral commission and both parties must work together to ensure Ghana's status as an African success story can be maintained.

Tim Wigmore is a freelance journalist who has written for The Sunday Times, The Independent, The Guardian and ESPNcricinfo, among others. His main interests in Africa are democratisation, with Ghana, Kenya and Zambia particular interests. He can be followed on twitter @timwig