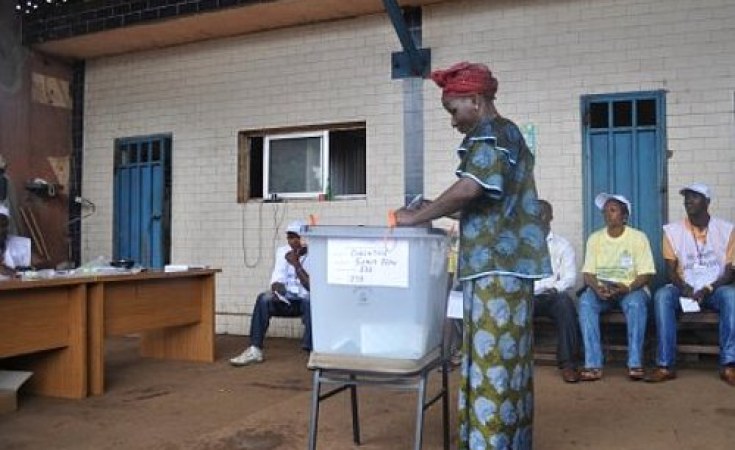 African Elections Project (AEP)
A woman votes in the elections in Guinea.
ThinkAfricaPress
By Kamissa Camara

Conakry — On October 2, close to two years after the election of Alpha Condé as the first democratically-elected president of Guinea, the so-called 'water castle' of Africa celebrated its 55th anniversary of independence from the French.

Although Guinea was the first and only West African French colony to opt for complete independence from the French Community - driven by the nationalistic and anti-imperialistic views of its first leader Ahmed Sékou Touré - Guinea has since struggled to remain on the path of political stability, social cohesion and socio-economic development. Guinea has experienced decades of political turmoil and instability through authoritarian regimes and coup d'états, fuelled by deep social tensions.

The challenges encountered throughout the 2010 electoral process, which brought veteran opposition leader Alpha Condé to the presidency, were emblematic of those deep fractions. After no single candidate managed to reach 50% in the first round, the second-round run-off pitted frontrunner Cellou Dalein Diallo - a member of the Peul community and leader of the Union of Democratic Forces of Guinea (UFDG) party - against second-placed Alpha Condé - a member of the Malinké community and leader of the Rally of the Guinean People (RPG) party. The Peul and Malinké groups are the two most populous ethnic groups in the country and combined represent around 70% of the population.

Held in June, the first round saw Diallo considerably outperform his rival, although the results were skewed by electoral fraud. According to the official results Diallo gained around 44%, while Condé managed 18%. In September, however, the head of the Independent Electoral Commission of Guinea (CENI), Ben Sekou Sylla, and one of his senior aides were convicted of fraud and for wrongly cancelling around 600,000 first-round votes for Condé.

Sylla was sentenced and replaced. But the controversy did not stop there. The choice of Sylla's replacement drew strong criticism, especially from Diallo and his party, which threatened to boycott the second round. The appointment of Louceny Camara, a Malinké, to the head of CENI convinced many of Diallo's supporters that state institutions were attempting to steal the presidency and disenfranchise the Peul community.

In the face of this political deadlock, General Sekouba Konaté, who was leading the political transition from military rule to civilian rule, appointed Siaka Toumani Sangaré, a Malian general and a seasoned regional electoral expert, to temporarily lead the CENI in lieu of Loucény Camara.

Nevertheless, in the period leading up to the second round, direct confrontations occurred between Peuls and Malinkés, resulting in houses and businesses being burned down, dozens of people being injured, and at least one death. Due to these violence outbreaks between the two presidential camps, the second round was delayed multiple times and finally took place in November 2010, after a nearly 5-month delay.

In a country where multi-party politics is a relatively new concept, political allegiances of language, ethnicity and region remain stronger than appeals based on policies. The strength of ethnicity lies in the fact that groups tend to equate holding the presidency with broader ethnic rule; in Guinea as in many other countries, ethnic allegiances contain promises of patronage. Ahmed Sékou Touré's leadership which ended with his death in 1984 is seen by many as the 'Malinké reign', Lansana Conté's presidency until December 2008 Soussous rule, and the short-lived takeover of Captain Dadis Camara in 2008 the rise of the Forestier region. In 2010, many in the Peul community felt their turn to govern had come.

Furthermore, through these ethnic lenses, Guinea's history can be read differently depending on which community one belongs to - and all groups can draw on historical grievances against other groups based on perceived past inequities: the unequal access to education, public offices and business opportunities; Toure's 'conspiracy' against the Peuls; the 'revenge' of Lansana Conté on Malinké military men; and Conté's crackdown on militants from the forest region.

The election of Alpha Condé, however, could have presented an opportunity for a new era - at least in theory. The 2010 election was supposed to bring an end to 50 years of authoritarian regimes and who better placed to usher in Guinean democracy than Condé? Sentenced to death under Sékou Touré and imprisoned and exiled under Lansana Conté, Condé had been a notorious opposition activist who, for decades, struggled for free and fair multiparty elections.

But despite an apparent will for multiparty politics, Condé has not been able to establish a clear, truthful and effective dialogue with the opposition. Promises to include opposition politicians Diallo and Sydia Touré in his government were broken, and when Condé closely escaped an assassination attempt in July 2011, the presidency was quick to accuse Diallo's UFDG even days before state authorities could establish the identity of the perpetrators.

Condé seems to be taking his cue from the predecessors whom he once fought. He has yet to form an inclusive government representing all ethnic groups and as a result of strenuous relationships with opposition, Condé's base remains fragile.

However, there may be a silver lining. Because of the difficult dialogue between government and opposition, the opposition has felt the need to mobilise supporters nationwide and remain highly organised since the 2010 presidential elections. A strong opposition is an important part of a functioning democracy. Testament to this is that in September 2012, Louceny Camara of CENI stepped down after being asked to resign in a formal request from the opposition due to his perceived links with the president. Although technical and political challenges remain before actual legislative elections can take place, this was a promising sign. And although parliamentary elections have been put on the backburner, opposition groups seem intent of capitalising on the opportunity to strengthen their position on the political scene.

President Condé has not been the inclusive democratic figure many would have hoped. For so long an opposition veteran, Condé now finds himself on the inside combating a strong opposition he inadvertently galvanised. How his term is judged will depend on how he deals with this opposition while retaining control of the government and the army.

Kamissa Camara is the Program Officer for West Africa at the National Endowment for Democracy in Washington, D.C.

Ministerial Reshuffle - a Civilian Govt and a Commitment to Human Rights