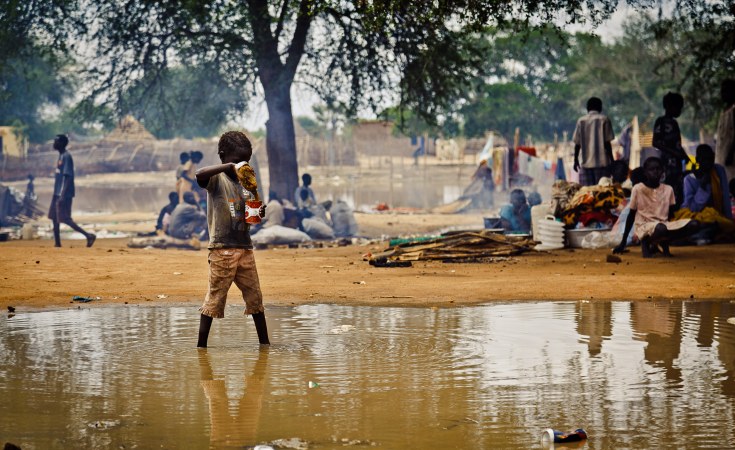 The Enough Project/Flickr
An internally displaced child in Turalei, South Sudan pours water from a mud puddle as others rest under trees.
allAfrica.com

There is good news out of Africa. Some of the world's fastest growing economies are African. International investment is growing.

Technology is driving massive changes. There have been several peaceful and democratic transfers of power in the past two decades that have seen the development of governments that have been improving the lives of their people.

But the Enough Project wants you to remember the people and the places where a lack of peace makes progress impossible.

Since its founding in 2007 by Africanists John Prendergast and Gayle Smith, Enough has focused on Africa "not only because of the grave challenges on the continent but because of the opportunities".

Smith, a former journalist, has gone on to work as a special assistant to former president Bill Clinton and President Barack Obama.

Prendergast has continued to create initiatives at Enough, often mobilizing celebrities to champion causes, such as the Satellite Sentinel Project with George Clooney, "which aims to prevent conflict and human rights abuses through satellite imagery" and has been a source of information about troop movements and human rights abuses in Sudan.

The Raise Hope for Congo Campaign spotlights the issue of conflict minerals in the eastern Democratic Republic of Congo, where millions of people have died in the past decade directly and indirectly from conflict, according to humanitarian groups.

A new Enough senior fellows program aims to promote greater public and policy attention to such situations. In an email exchange while traveling, Prendergast shared these thoughts about the initiative:

"Creating a senior fellows program will help channel a number of diverse and influential voices into the policy debates in the U.S. and abroad regarding how to respond to the world's worst human rights crimes," he said. "The Enough Project fellows hail from extremely diverse backgrounds ranging from leading academics to frontline NGOs to former diplomats to issue experts to celebrity activists. We hope their expertise and creative energy can be utilized to raise the quality of discussion around ending mass atrocities."

He said the fellows would engage in individually tailored efforts on behalf of the Enough Project and the issues the organization works on.

"Some will be able to address the human rights crises in Congo, the Sudans, Somalia and areas affected by the Lord's Resistance Army as geographic experts, and others will look at these regions and the challenges they face from a more functional perspective," he said. "This will provide a real opportunity to diversify and deepen the Enough Project's analysis of root causes and assessment of various policy options."

The Enough Project Focuses On Worst Cases in Africa