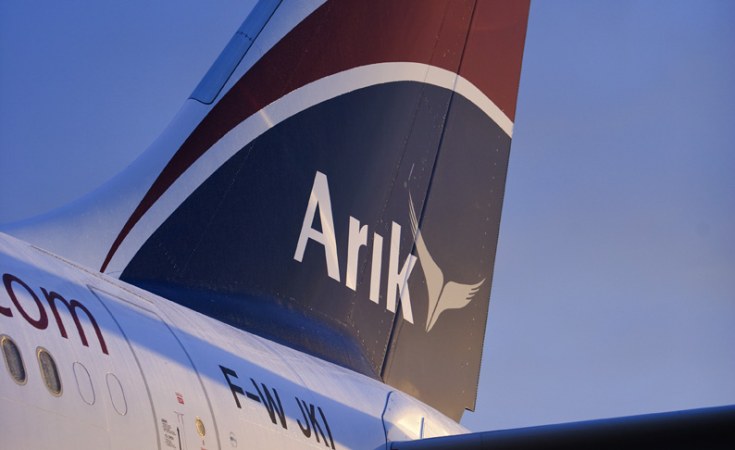 Arik Air, West and Central Africa's largest airline, has secured yet another award in recognition of its commitment to developing Nigeria/Sierra Leone relations. On Saturday, February 23, the Nigeria High Commission in Sierra Leone presented the airline with a merit award for its outstanding contribution to the development of the Nigerian community and the relationship between the two countries in 2012.

Speaking at the award ceremony in Freetown, Sierra Leone, the Nigeria High Commissioner to Sierra Leone, Mr. Eyo Asuquo, said Arik Air has worked tirelessly to strengthen the relations between Nigeria and Sierra Leone. He stated that the award ceremony was established in line with the directive of the Ministry of Foreign Affairs. Receiving the merit award from the Sierra Leone High Commissioner to Nigeria, Mr. Henry Macauley, Arik Air's Freetown Manager, Mr. Femi Asun, said the honour would spur the airline to do even more to promote relations between Nigeria and Sierra Leone.

Arik Air started operations toFreetown in June 2009 following the demand from both communities for direct air links between Sierra Leone and Nigeria ending years of limited access between the two countries. The airline now operates three weekly flights between Lagos, Nigeria and Freetown, Sierra Leone on Sundays, Wednesdays and Fridays.

Arik Air's Executive Vice President/Managing Director, Mr. Chris Ndulue said of the new award:
"We are extremely pleased with this merit award by the Nigeria High Commission in Sierra Leone. It is recognition of our effort to stimulate travel, ease the movement of goods and personnel, and provide affordable air travel between Nigeria and Sierra Leone is appreciated by the government and by the people of the two nations."