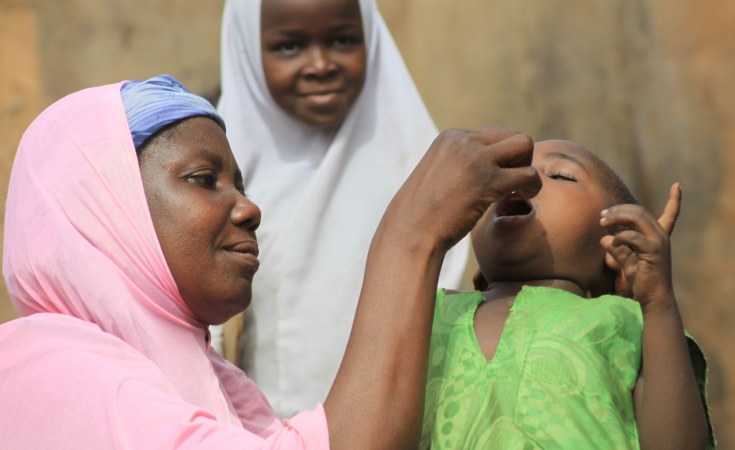 Just as we were seeing record-low cases of polio worldwide and coming closer than ever to eradication, 105 new cases of wild polio have been identified in Kenya and Somalia, raising new concerns about low coverage and inaccessible populations in that area. While the outbreaks are undoubtedly a setback, the Global Polio Eradication Initiative (GPEI) had anticipated that sporadic cases would occur in vulnerable settings during the final push for polio eradication, and it's noteworthy that the situation has been met with one of the quickest and most effective emergency responses to date.

Although polio has been cornered in a handful of countries, the last vestiges of the disease will be the most difficult to stop. For example, political instability and insecurity in some areas --which in Nigeria and Pakistan culminated in the targeted murder of health care workers engaged in delivering services earlier this year -- hinder access to at-risk children and can fuel the risk of outbreaks. Fortunately, containing outbreaks, such as those in the Horn of Africa, is a crucial part of the GPEI's Polio Eradication and Endgame Strategic Plan 2013-2018.

Over the past 10 years, the GPEI has improved its outbreak response by systematically learning lessons from the more than 100 polio outbreaks that have occurred worldwide.

Since May of this year, 10 polio cases have been confirmed in Kenya and 95 in Somalia. A dozen vaccination campaigns have been conducted from May through July 24 across Somalia, Kenya, Ethiopia and Yemen that aimed to reach more than 17 million individuals, including adults in some areas. Additional campaigns will be executed in August.

The polio team is benefitting from the world's most advanced surveillance system, which detects polio cases faster and more precisely. It helped health experts quickly identify the 105 cases in the Horn of Africa - the vast majority of which occurred prior to the outbreak response activities - and subsequently guided where vaccination gaps needed to be filled. We now expect to see a drastic drop in new cases post-response. Since 2010, all but one outbreak of wild polio virus was stopped within six months.

But responding to outbreaks is only one element of the GPEI's multi-faceted eradication plan, which outlines a comprehensive series of steps all countries should take to achieve eradication by 2018. For example, to prevent outbreaks in the first place, it is essential to ensure strong immunization systems are in place and vaccination rates are high.

That is why the polio eradication plan includes significant resources for the rapid fortification of routine immunization systems. The plan commits at least half of GPEI field personnel's time to work to achieve this by the end of 2014 in endemic and high-risk countries.

Strengthening immunization has the added benefit of helping the fight against other vaccine-preventable diseases, such as rotavirus and measles.

For example, in India, the polio programme introduced a system to identify, track and immunize every newborn child in areas of the country that were at high risk for polio. These efforts helped ensure vulnerable infants were included in the routine immunization system so they would receive polio vaccines as well as others that are critical.

The global plan to eradicate polio comes with one very important caveat: it must be funded up front.

The current outbreak is just the most recent example of the risk endemic polio anywhere poses to children and polio-free countries everywhere. In 2009, a polio outbreak in Tajikistan resulted in nearly 500 polio cases and cost U.S.$10 million to end. China and the western and central parts of Africa have also seen recent outbreaks.

A fully funded plan ensures that tradeoffs are not made in emergency situations by using a meticulous modeling process to budget for future outbreaks. Full funding also gives GPEI the flexibility to effectively respond to sudden outbreaks while continuing to prioritize its intensive efforts to end transmission in the three endemic countries: Nigeria, Pakistan and Afghanistan. Earlier this year I joined with more than 400 scientists and global health experts to state my confidence in the GPEI plan. I remain a strong supporter of the plan today.

Eradicating polio is a daunting challenge, but new knowledge and innovations are leading the way. Over the last two decades, the polio program has developed highly sophisticated strategies to access the most marginalized and hard-to-reach communities by improving overall health infrastructures and increasing community trust. Applying these lessons to routine health programs will pave the way for the delivery of measles and rubella vaccines, as well as new vaccines and other health interventions, to previously unreached children.

It's a tall order to reduce costs and increase vaccine uptake - especially in communities that have low motivation to prevent diseases they do not even see and where fear and social disruption hamper progress - but this will be the challenge of the future.

The world has a plan to end polio. It's working, and we must stand behind it.

Helen Rees OBE is the executive director of the Wits Reproductive Health and HIV Institute at the University of the Witwatersrand in South Africa and honorary professor at the Department of Clinical Research at the London School of Hygiene and Tropical Medicine. She is also the chair of the World Health Organization's Strategic Advisory Group of Experts (SAGE) on Immunization. She serves on the GAVI Alliance Board and PPC and on the South African NITAG.