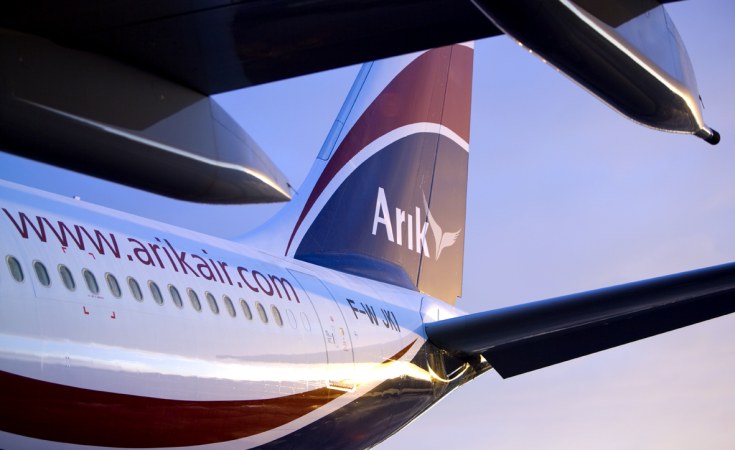 Arik Air, Nigeria and West Africa’s leading commercial airline is pleased to announce that it has signed an agreement to sponsor up-and-coming Nigerian boxers, Larry Ekundayo and King Davidson.

As the primary sponsor, Arik is providing both title hopefuls with the financial assistance needed to focus on their boxing full time. The airline’s support comes at a crucial time in Larry and King’s careers, with both men 12 to 18 months away from challenging for world titles.

King Davidson is scheduled to take part in a WBO light-middleweight international Title fight this November; victory would see him catapulted into the WBO top ten rankings for his weight class. Larry Ekundayo, a welterweight fighter, who is currently ranked 3rd in the UK will not be fighting until the New Year.
Commenting on the decision to support the boxers, Sir JIA Arumemi-Ikhide, Chairman of Arik Air said: “I am delighted we are sponsoring Larry and King, two fighters who epitomize the spirit of Arik Air. Like us, they have persevered and punched above their weight to get where they are today.

“We see this as an opportunity to give something back to the Nigerian community who are very proud of the country’s strong sporting tradition. Their continued support has enabled us to become West Africa’s most successful airline and we believe Larry and King can give them something to smile about.”
King Davidson said: “We are very grateful to Arik for their support and the belief they have shown in us.

The harsh reality of professional boxing is that one can only go so far without adequate financial support. The airline has kindly given us this support and thanks to their generosity we are in the best possible position to represent Nigerian boxing on the international stage and make the people at home proud.”
Larry Ekundayo added: “We are both very proud to be sponsored by a Nigerian company, especially one that wants to support its country’s sportsmen. The support we are receiving from Arik is about more than just money though, they have put enormous faith in us and they are really willing us to succeed.”