Lesotho: It's Not Too Late for Lesotho to Get Back On Track 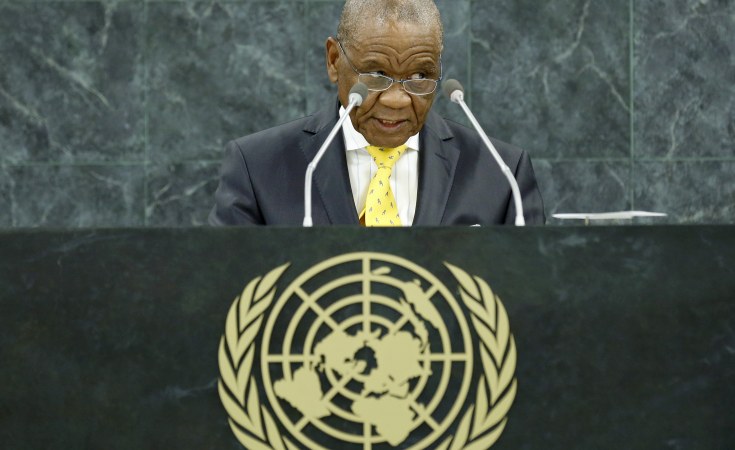 Lesotho's politicians have shown themselves to be capable of governing for the common good in the past. A return to this spirit is crucial now to avoid tragedy.

During the early hours of 30 August, soldiers in Lesotho surrounded the country's police headquarters and Prime Minister's residence, cutting power in the capital Maseru and shutting down radio stations for several hours.

Prime Minister Thomas Thabane and the newly-appointed commander of the armed forces, Brigadier Maaparankoe Mahao, who both reportedly escaped assassination attempts, fled to neighboring South Africa, which surrounds the small landlocked country of two million people. Thabane, and a South African Foreign Ministry spokesman, both declared that the military actions bore "the hallmarks of a coup d'état." Other observers were a bit more cautious, such as the US which issued a statement urging peaceful dialogue.

While the precise details surrounding the events are still hazy, there are some important lessons to be drawn. Most importantly, making sense of Lesotho's conflict, however fluid at the moment, will help provide a path out of the current crisis. Although political analysts, and even avid Africa watchers, routinely ignore Lesotho, deeming it an inconsequential backwater, its political trajectory will be instrumental in shaping the future of not only South Africa, the region's superpower, but also that of the Southern Africa Development Community (SADC), the 15-state regional bloc of which Lesotho and South Africa are members.

Roots of the unrest

The root cause of the outbreak of violence in Lesotho was the result of a breakdown of the coalition government, which has occupied power since 2012. Serious political fissures began to open in June of this year when Deputy Prime Minister Mothetjoa Metsing, leader of the Lesotho Congress for Democracy (LCD), announced an agreement with the Democratic Congress (DC) - the largest party in parliament and official opposition - to pass a no-confidence motion against Prime Minister Thabane, leader of the All Basotho Convention (ABC). Sensing that his political fate was hanging in the balance, Thabane suspended parliament, precluding his political foes from unseating him through democratic processes. To complicate matters more, Thabane had recently spearheaded an anti-corruption campaign, ensnaring Metsing in what would have likely been an embarrassing and drawn-out court case, slated to begin this month.

The escalation of hostilities was also the result of entrenched alliances between members of Lesotho's governing coalition and certain branches of the security forces, namely the army and police. The decision by Thabane to replace the head of the army, Lieutenant General Tlali Kamoli, with his ally Mahao, was seen as an underhand and self-serving move by those outside Thabane's camp.

Shortly after the violence had subsided, Lesotho's main political actors convened in Pretoria, South Africa, for a meeting that included the host country's president and regional powerbroker, Jacob Zuma. In a bid to restore a semblance of normalcy, Prime Minister Thabane agreed to reopen Parliament on 19 September.

The ongoing turmoil matters deeply to ordinary Basotho, many of who are concerned about access to basic services like electricity and the human security that comes with the rule of law and a functioning democracy. Given the precarious economic fortunes experienced by many across the country, the average person can ill-afford disruptions to their schooling, jobs, and livelihoods. While gross national income, according to the World Bank, has steadily risen for over a decade, the country has yet to make that growth accessible to all Basotho, the majority of whom still live below the national poverty line.

Nevertheless, the country remains one of only a handful of countries in SADC to be rated "free" by human rights watchdog Freedom House, and one of only ten African countries overall to achieve that designation. Lesotho has also improved in areas of vital social significance that could portend a more prosperous future. According to the Mo Ibrahim Index of African Governance, for example, Lesotho outpaces many of its African counterparts in two main categories: Safety and the Rule of Law, as well as Participation and Human Rights. Towards that end, Lesotho has been considered, until very recently, a relative success story on a continent of which headlines are unfortunately - and often unfairly - dominated by coups, corruption, and general human suffering.

Lesotho is also one of only three countries in the SADC region to experience a transition of political party in the executive by means of elections, the others being Zambia and Mauritius. The Basotho people regained democratic rule in the early 1990s, by largely peaceful means, and there was hope that the new coalition government represented a maturing democracy.

The longer Lesotho's political uncertainty drags on, however, the greater the likelihood of disastrous disruptions to the lives of ordinary Basotho, and for the country as a whole. Much of Lesotho's economy depends on the manufacturing sector, which constitutes upwards of 30% of its gross domestic product (GDP). What's more, nearly 100% of Lesotho's exports fall under the African Growth and Opportunity Act (AGOA), a trade preference programme that gives duty-free treatment to goods going to the US. These jobs could easily disappear if Lesotho's government cannot ensure safety, or if the instability caused its borders to close. Revoking a country's AGOA status is not unprecedented, happening previously during unrest in the Ivory Coast, Mali, Guinea, Madagascar, and most recently in nearby Swaziland.

Lesotho's instability could also have wider resonance on resource conflicts beyond its borders. Gauteng Province, the administrative, industrial, and mining heartland of South Africa - and arguably the SADC region - relies heavily on access to Lesotho's water supply. South Africa's leaders are well aware that when they bathe, cook, and enjoy a swim, they do so with water from the Lesotho Highlands Water Project, a massive 30-year multi-billion dollar cooperative venture between Lesotho and South Africa. The latter's interest in Lesotho's domestic affairs stems in part from its water, but there is a longer history of intervention, demonstrated by repeated attempts over the years to shape the leaders in power to conform to South African interests.

Leabua Jonathan, elected Lesotho's Prime Minister at independence in 1965, for instance, clung to power for decades after his 1970 electoral defeat because B.J. Vorster's apartheid regime funded his military. By 1982, however, after Jonathan openly criticised his neighbor, Vorster's military raided Maseru, killing many African National Congress (ANC) refugees in addition to scores of innocent Basotho civilians. Growing increasingly disillusioned with Jonathan, the South African government then sealed Lesotho's borders in 1986, barring the delivery of food, petrol, and other necessities, prompting Lesotho's military to oust Jonathan by force. These military leaders, largely dependent on South Africa's backing, then quickly signed the long-discussed water project treaty. South Africa again invaded Lesotho in 1998 at the head of a SADC intervention force after disputed elections, leveling swaths of Maseru's commercial district. The subsequent economic ruin remains visible to this day.

Beyond South Africa, there is also a need to foster greater stability and advance core democratic principles in the region. In this regard, Lesotho has an important, and perhaps outsized role to play. SADC has experienced significant setbacks with general declines in political rights and civil liberties in many of its member countries over the past several years. By contrast, Lesotho's coalition government, elected in 2012, marked the first peaceful transfer of power in the country, ushering in the continent's only coalition government under a Westminster system as a result of elections. Just as important, the elections were declared "free and fair" by all international observers, including the African Union and SADC-- no small feat for a region historically replete with fraudulent elections.

The 2012 elections that brought together Lesotho's governing coalition inspired feelings of genuine hope and optimism. There was a sense that an important corner had been turned - that the self-interest of political leaders could take a backseat to compromise and pragmatism. While these high hopes have been somewhat dashed over the past week, a new survey suggests that faith in democracy remains strong, with a majority of Basotho saying elections are the best means for selecting leaders. In the same survey, the fact that six out of ten voters reported being dissatisfied with "the way democracy works" should be read as an indictment of the political leaders and current party structures rather than as an indictment of electoral democracy itself.

Lesotho's politicians have shown themselves at the best of times to be capable of governing for the common good. An example of this was the Universal Old Age Pension Scheme of 2004, which was one of the first attempts by a low-income country to effectively care for its aging population through direct payments. The success of this programme in providing basic social services is impressive, but from a political standpoint, the pensions have also helped build trust between citizens and the government.

This final point is noteworthy as it offers a way forward. With a degree of outside pressure - and it will have to be light given Lesotho's past - a sustainable compromise is possible. Having SADC members with reasonably good records of democratisation, such as Botswana and Mauritius, to help negotiate a grand bargain is a good place to start. A truly sustainable compromise must also incorporate dialogue with key domestic actors, not only politicians and leaders of the security forces, but civil society too, including religious leaders and NGOs.

The key to unlocking Lesotho's immediate and long-term stability will be for its leaders to embrace a strategy of compromise and to govern with an eye towards the common good rather than one premised on political posturing and brazen self-interest. The latter approach has clearly led Lesotho astray, embroiling the country, and now SADC, in renewed turmoil.

It is not too late to get the country back on track.

Jeffrey Smith is the Advocacy Officer at RFK Partners for Human Rights. Follow him on twitter at @Smith_RFKennedy. John Aerni-Flessner is an assistant professor of African and World History at Michigan State University. Follow him on Twitter at @LesothoJohn.