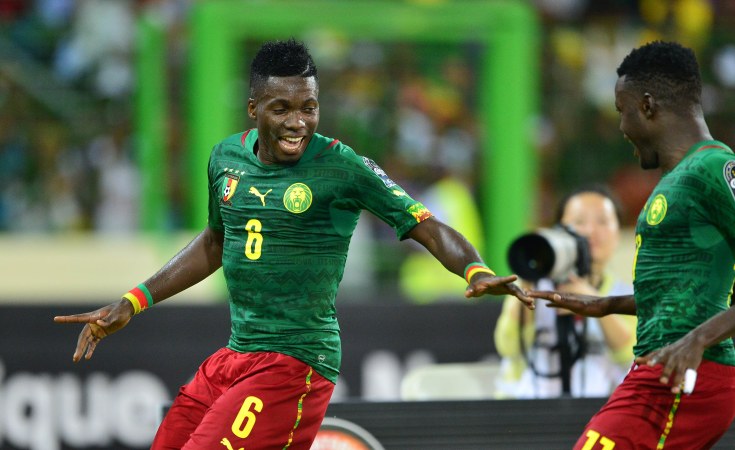 Gavin Barker/BackpagePix
Midfielder Ambroise Oyongo celebrates after showing his class with a well-taken goal for Cameroon on Tuesday night.
allAfrica.com
By Nick Said

Dateline — Midfielder Ambroise Oyongo provided an expert finish seven minutes from time to earn a point for Cameroon as they came from behind to draw 1-1 with Mali in their African Nations Cup Group D clash in Malabo on Tuesday night.

In an entertaining encounter that flowed from end-to-end, both sides had numerous chances to win the game, and it looked like it would go Mali's way when Sambou Yatabare gave them the lead 20 minutes from time.

But Oyongo showed his class with a well-taken goal that will leave the Indomitable Lions breathing more than one sigh of relief.

Like Group B, all four sides in the pool have a single point after Ivory Coast and Guinea also played to a 1-1 draw in the other match earlier in the day.

Five of the eight matches in the first round of games finished 1-1, with Burkina Faso the only team of the 16 who failed to find the back of the net.

In front of another sizable crowd at the Nuevo Estadio de Malabo, Cameroon were dealt an early blow when midfielder Eyong Enoh limped out of the game after just 14 minutes.

Bakary Sako came close to opening the deadlock when he found acres of space on the left-hand side of the Cameroon box, but his shot was expertly beaten away by Fabrice Ondoua in the Indomitable Lions goal.

Cameroon's best chance of the half came as Benjamin Moukandjo headed wide when he really should have hit the target from close range.

Volker Finke's side started the second period much brighter and after striker Vincent Aboubakar had seen his curling effort drift wide, Moukandjo provided a superb ball across the six-yard box that eluded on-rushing teammates.

Mali though they should have had a penalty when Sako went to ground under a challenge from Nicolas N'Koulou, but replays showed the tackle was timed to perfection.

The deadlock was broken on 70 minutes and it was no surprise that Mali talisman Seydou Keita was involved in the build-up.

His excellent free-kick was flicked-on to Yatabare at the back post and after controlling with his chest, he lashed the ball past Ondoua with the pace on the ball giving the goalkeeper no chance.

Cameroon looked to be running out of ideas in their search for an equaliser but Raoul Loe's searching ball into the Mali box was superbly controlled by Oyongo with his first touch, and with his second he supplied a neat finish.

Mali had the ball in the back of the net in injury-time, but the goal was disallowed for offside with replays again proving the match officials had made the correct call.