Signature of a Loan Agreement in the Republic of Senegal 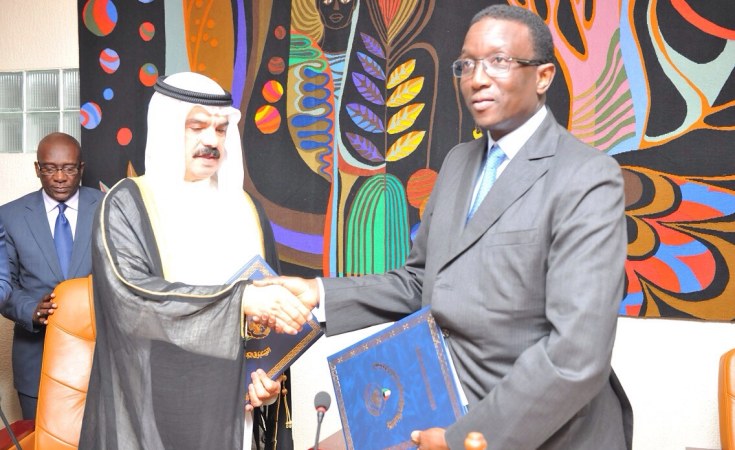 A Second Loan Agreement was signed today in Dakar whereby the Fund shall make a Second Loan of KD. 10,000,000/- (i.e. about US$ 35 million) to assist in covering the increased costs of the Rehabilitation of Touba-Dahra-Linguere Road Project in the Republic of Senegal.

The Second Loan Agreement was signed on behalf of the Republic of Senegal by H.E. Mouhamadu Ba, Minister of Finance and on behalf of the Fund by Mr. Hamad Al-Omar, Deputy Director-General of the Kuwait Fund for Arab Economic Development. Mr. Thamer Al-Failakawi, Regional Manager for West African countries at the Fund attended the signing ceremony of the Loan Agreement.

The Project aims to support the economic and social development in the Central Region of Senegal by improving its link with the Capital Dakar and its main sea port and further improve connections with the remaining regions of the Country in all weather conditions, to improve the exploitation of their agricultural products and reduce its transport cost and time, and to facilitate people's access to markets and social services.

The Project comprises the improvement of the existing road between the towns of Touba, Dahra and Linguere to bituminous road standards with a total length of about 115 km and a width of 7.2 m with 1.5 m paved shoulders on each side, increasing to 10.2m with 1.5m sidewalks in populated areas. The Project also includes consultancy services for revision of tender documents and supervision of construction works.

On the other hand for facilitate the Fund's financing for the project, it was agreed during the appraisal of the project to limit the Fund's loan for financing the costs of the second lot of the Road Dahra -Linguere with a total length of 44 km. The total cost of that lot was estimated at KD. 7.5 Million, i.e. about FCFA 12,470 Million, of which about KD. 5.5 million in foreign currency, representing about 74% of the total cost of that sector.

The integrated Loan - including the First and the Second Loan - shall be for a period of 24 years, including a grace period of 4 years amortized in 40 semi-annual installments.

The Loan bears an interest rate at 1.5% per annum, in addition to 0.5% per annum to cover administrative and other expenses incurred in the implementation of the Loan Agreement.

Upon signature of this Loan Agreement, this loan will be the 29th one accorded by the Fund to the Republic of Senegal to finance projects in different sectors. The total amount of the previous 28 loans is estimated at about KD. 100.32 Million (i.e. about US$ 351 Million). The Republic of Senegal had also obtained 2 Technical Assistance Grants from the Fund for financing the technical and economic feasibility studies for some projects, the total value of them is about KD. 580,000/- (i.e. US$ 2.3 million). In addition to the above, the Fund had administrated the State of Kuwait's Government's 2 Grants, the amount of which is KD. 2.9 million (i.e. about US$ 10.1 million) attributed to the Emergency Project of Rural Water Supply.

Tagged:
Copyright © 2014 Kuwait Fund For Arab Economic Development. All rights reserved. Distributed by AllAfrica Global Media (allAfrica.com). To contact the copyright holder directly for corrections — or for permission to republish or make other authorized use of this material, click here.