Signature of a Loan Agreement in the Republic of Cote d'Ivoire 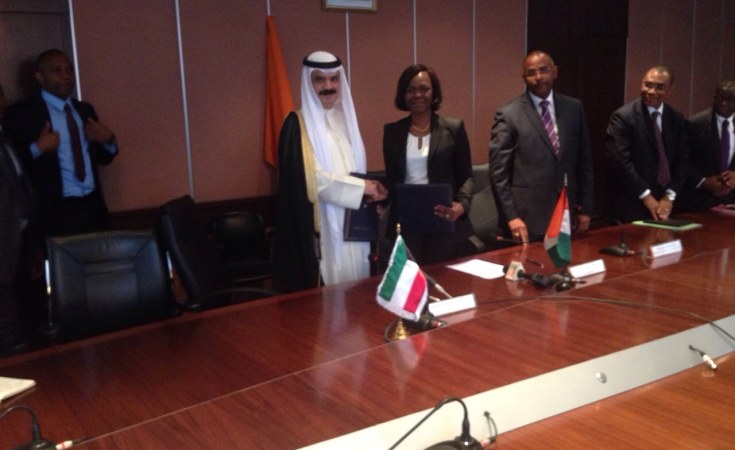 A Loan Agreement was signed today in Abidjan between the Republic of Cote d'Ivoire and Kuwait Fund for Arab Economic Development, whereby the Fund shall make a Loan of Kuwaiti Dinars Seven Million (KD 7,000,000) (i.e. about US$ 24.5 million) to help finance the Potable Water Supply in the Eastern Region Project (Adzope System-Phase I) in the Republic of Cote d'Ivoire "the Project".

The Loan Agreement was signed on behalf of the Republic of Cote d'Ivoire by H.E. Kaba Niale Ministre Auprs du Premier Ministre Charg de L'Economie et des Finances and on behalf of the Fund by Mr. Hamad Al-Omar, Deputy Director-General of the Kuwait Fund for Arab Economic Development. Mr. Thamer Al-Failakawi, Regional Manager for West African countries at the Fund attended the signing ceremony of the Loan Agreement.

The project aims at supporting socio-economic development in the Eastern Region of Cote D'Ivoire through meeting the potable water demand in Adzope, Abradine 1, Abdradine 2, Assie-Orie, Yakasse Attobrou, Biasso, Fiasse, Diangobo, and Kong 2 cities with a population totaling approximately 92,000 capita about 60% of whom are unserved and about half of whom are children. Most and foremost, the project is considered a Rights Based Project seeking to achieve the right to "Access to Clean Drinking Water", which is a fundamental human rights.

The project implementation is envisaged to commence during the second half of 2014 and will be completed during the last quarter of 2018.

The Loan will be for a period of 25 years including 5 years as a grace period, and will be amortized in 40 semi-annual installments, the first of which will be due on the 1st date on which any interest or other charge on the loan shall fall due, after the elapse of the above-mentioned grace period. The Loan bears an interest at 1.5% per annum, in addition to 0.5% per annum to cover administrative costs and other expenses incurred in the implementation of the Loan Agreement.

Upon signature of this loan agreement, this loan will be the 4rd loan extended by the Fund to the Republic of Cote d'Ivoire considering that the Fund had already extended to the Republic of Cote d'Ivoire three loans before with a total amount of KD 12,23 million (about $ 42.805 Million) in the Irrigation and Transport Sectors. The Fund had also extended to Cote d'Ivoire one Technical Assistance in the amount of KD. 100,000 for carrying out studies for the Integrated Rural Development Project.