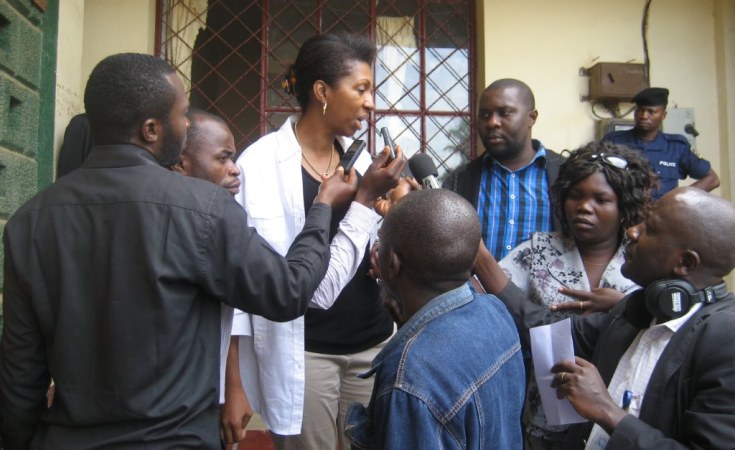 The Democratic Republic of Congo (DRC) is one of the most dangerous places in the world to be a woman. According to a 2011 American Journal of Public Health report, more than 400,000 women surveyed in 2007 reported having been raped in the previous 12 months - equating to 1,150 rapes per day.

The high incidence of sexual violence against women and children in the region has been attributed to a systematic tactic of war used by members of the Congolese army, rebel groups, militias and others to destroy community and family bonds.

The DRC is one of Africa's largest countries by population and land area with an estimated 71 million residents. With parts of the country, especially in the east, mired in conflict for decades, its criminal justice system is overburdened and often paralysed by administrative dysfunction and endemic corruption.

For those living in regions such as Nord-Kivu, Sud-Kivu and Orientale, where reaching a formal courthouse could take more than a week's journey, finding justice for victims of violent sexual crimes has been next to impossible -- until recently.

Since 2008, judges, magistrates and prosecutors in the DRC have been traveling to remote areas as part of new initiative: to take specialized military and civilian courts, many of them mobile courts, to the people. The courts, funded and organised by a range of local and international agencies, focus on prosecuting cases of rape and gender-based sexual violence.

Mobile military courts have had significant successes, most notably the conviction of Lieutenant Colonel Matuara Kabibi and five soldiers under his command for crimes against humanity. In retaliation for the killing of one of his men, Kabibi ordered the rape and pillage of the town of Fizi in a horrific night of violence on New Year's Day 2011. Prosecutors presented evidence, along with the testimony of 49 women who recounted to the court the sexual violence they were subjected to.

The tribunal resulted in the conviction and sentencing of Kabibi and his men to prison sentences ranging from 10 to 20 years. As they were led away, the president of the Military Court of South Kivu Colonel Freddie Mukendi declared, "Justice is not impossible to achieve in the DRC."

On June 10 this year another major victory for victims of gender-based sexual violence was claimed. The Grand Tribunal of Bunia, in Eastern DRC, handed down 46 convictions in 65 cases it tried. This court was based in the capital of the Ituri District, and services an area of 25,000 square miles. It has dramatically expedited a sluggish judicial process that previously allowed ample time for perpetrators to flee prosecution.

The Grand Tribunal of Bunia was co-funded by the DRC government and the United Nations Office of the Special Representative of the Secretary-General on Sexual Violence in Conflict, with financial support also from the Japanese government.

The court in Bunia seeks to improve on advances made by mobile military courts and extend the same access to justice in civilian cases.

Jeanine Mabunda Lioko, presidential adviser on Sexual Violence and Child Recruitment says, "Not all victims of sexual violence in the DRC are able to easily access the court system, so we are bringing the courts to the people. These mobile courts are helping to restore faith in the justice system, and demonstrate that the DRC will not be complicit."

'New Dawn' in Land of Rape and Child Soldiers