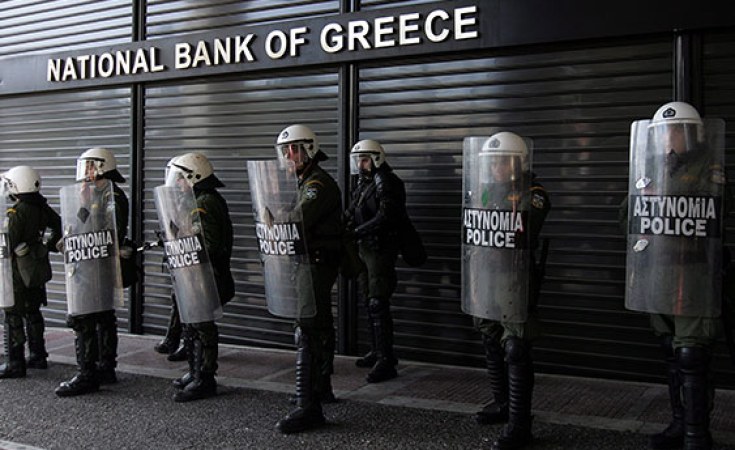 http://underclassrising.net/
National Bank of Greece Guarded. Workers take to the streets against cutbacks.Tens of thousands of striking Greek workers took to the streets, some throwing stones at police, in a defiant show of protest against austerity measures aimed at averting the debt-plagued country’s economic collapse.
Content from our Premium Partner
United Nations Economic Commission for Africa (Addis Ababa)

Addis Ababa — Despite growth during the past decade and relatively good performance, African economies lackindustrialisation and integration. Academic evidence from the Economic Commission for Africa (ECA), the African Development Bank (AfDB) and the African Union Commission (AUC) shows this recent growth has had no impact on the underlying structural design of these economies and to diversify its economies, the continent must reverse its dependence on merchandise exports dominated by raw and unprocessed commodities.

The ninth session of the Economic Commission for Africa Committee on Regional Cooperation and Integration (CRCI) will therefore convene in Addis Ababa from 7 to 9 December 2015 to discuss means of promoting and accelerating productive integration through trade and market integration; economic diversification; competitiveness; infrastructure; regional and continental value chains development; and the financing and investments needed to meet implement these policies.

Studies, including the recent ECA Economic Report on Africa (ERA), suggest that to improve intra-African trade, the continent must address its overall weak productive capacities and lack of competitiveness andtechnological sophistication. The studies cite infrastructure as one of the key impediments to productive integration in Africa. An insufficient infrastructure has adverse effects on supply and value chain linkages, not only in the agriculture sector on which the majority of Africans depend, but also in manufacturing and other sectors of the economy. It also affects growth, the creation of jobs and eventual elimination of widespread poverty.

Themed "Enhancing Productive Integration for Africa's Structural Transformation", this ninth session of the Committee will meet to review several documents such as the report on Assessing Regional Integration in Africa VII: Innovation, Competitiveness and Regional Integration (ARIA VII) which recommend that Africa implement innovation-friendly policies if it is to achieve sustained economic growth and transformation.

The ARIA VIII and ECA Economic Report on Africa recommend increasinginvestments in hard infrastructure, financial services, soft infrastructure and a creation of conducive macroeconomic policies and business environment. Investments in transport, energy, and information and communication technology form a strong basis for a viable and an economic oriented regional integration, the reports argue.

While the eight session of the Committee focused on concrete policy actions and measures required to enhance progress in trade, regional cooperation and integration, this ninth session will address specific policies such as the Action Plan for Boosting Intra-African Trade, and the envisaged establishment of the Continental Free Trade Area (CFTA) which African Union Assembly of Heads of State and Government wish to launch by 2017.

Since the last session's discussions, important progress has been made with regard to CFTA. The Heads of State of the tripartite countries launched the Tripartite Free Trade Area, comprising 26 member states of the Common Market for Eastern and Southern Africa, the Southern African Development Community and the East African Community during their recent summit in Egypt in June 2015. The African Union Assembly of Heads of State and Government also launched the negotiations for CFTA during their summit in Johannesburg in June 2015, and reaffirmed their earlier decision to have CFTA established by 2017.

For the CFTA to be more meaningful, it is recommended for African states to transform the structure of their economies through accelerated industrial development and by creating supply and value chain linkages across the continent.

Participants for this Committee are expected to comprise of senior officials and experts drawn from African ministries in charge of regional integration, trade and industry, infrastructure, agriculture and land policy; Addis Ababa based African Ambassadors and Plenipotentiaries based in Addis Ababa; representatives from the African Union Commission, the regional economic communities, the African Development Bank, and the NEPAD Planning and Coordinating Agency; representatives from the organisations of the United Nations system, the World Bank, and the African Economic Research Consortium (AERC); and development partners asobservers.

Established by the ECA Conference of Ministers, theCommittee on Regional Cooperation and Integration (CRCI) meets on a biannual basis to review the work undertaken on regional integration and trade such as food security, agriculture, industrialisation, infrastructure and investment in Africa.