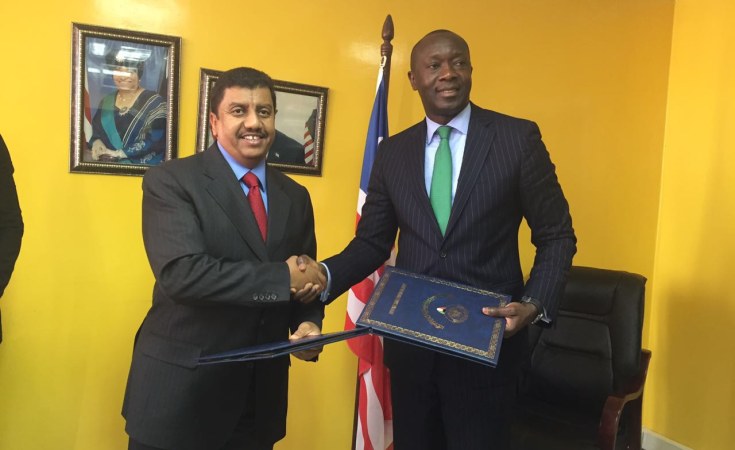 A Loan Agreement was signed today in Monrovia between the Republic of Liberia and Kuwait Fund for Arab Economic Development whereby the Fund will extend a loan of Kuwaiti Dinars five million (KD.5,000,000/-) (i.e. equivalent to about 17  million US$) to help finance the  Gbarnga – Salayea Road Project.

The Loan Agreement was signed on behalf of the Republic of Liberia by H.E. Mr. Amara Konne , Minister of Finance and on behalf of the Fund by Mr. Ghanem Sulaiman Al-Ghenaiman, Deputy Director-General of the Kuwait Fund for Arab Economic Development in attendance of Mr. Thamer Al-Failakawi, Regional Manager for West African countries at the Fund.

The aim of the Project is to enhance the economic and social development of the central region of Liberia, and at the same time to participate in linking Liberia with the neighboring Republics of Guinea and Sierra Leone.

The Project consists of construction works to attain an all-weather asphalted road of an approximate length of about 81 km and a width of 7.5 m. (with 1.5 m. shoulders on each side) between Gbarnga and Salayea. The Project also includes construction works of drainage facilities, re- construction or rehabilitation of bridges, protection, safety and environmental protection facilities, as well as the consultancy services to review the detailed design and supervision of construction, and institutional support, and land acquisition. The Project is expected to be completed by the end of 2019.

The Loan will be for a period of 26 years including 5 years grace period, and will be amortized in 42 semi-annual installments, the first of which will be due on 1st date on which any interest or other charge on the Loan shall fall due after the elapse of the above mentioned grace period.

The Loan bears an interest rate at 1% per annum, in addition to 0.5% per annum to cover administrative costs and other expenses incurred in the implementation of the Loan Agreement.

By concluding this agreement, it will be the third Loan that the Fund provided to Liberia, where the Fund previously provided two loans amounting to about 6 million Kuwaiti Dinars equivalent to about 20 million U.S. Dollars for financing projects in transport sector. In addition, the Fund has also provided Liberia with one Technical Assistance of about 423,000 Kuwaiti Dinars (equivalent to about 1.44 million United States Dollars) for financing feasibility studies of this Project.