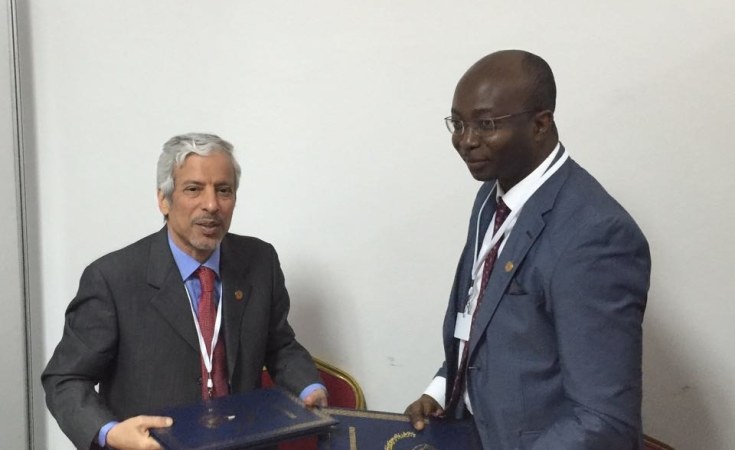 The Loan Agreement was signed on behalf of the Republic of Sierra Leone  by His Excellency Mr. Batrick Coneh , Minister of finance and on behalf of Kuwait Fund for Arab Economic Development by Mr. Hesham Al-Waqayan, Deputy Director-General of Kuwait Fund in attendance of Mr. Thamer Al-Failakawi, Regional Manager for West African countries at the Fund.

The Project aims at enhancing the economic and social development of the Republic of Sierra Leone through the construction of Phase II of Hillside Road Project, which connects the east, and west sides of the Capital.

The Project consists of the construction of an asphalt-concrete road of 2.25 KM long, a doubled 2-lane carriageway with a width of 7.3 m for each lane, and a provision of a 2 m wide median and corridors of 1.5 m, 3 m wide for pedestrians and bicycles respectively.

. The Project consists of the following main components, site preparation, demolition of properties, utilities reallocation, earthworks, concrete works for retaining walls, construction of water culverts drains and environmental protection works, pavement works including sub-base, base and asphalt-concrete layers, traffic furniture and road marking, consultancy services for the supervision of construction, institutional support for the implementing unit as well as land acquisition. The Project is expected to be completed by the mid of 2018.

The Loan will be for a period of 24 years including 4 years as a grace period, and will be amortized in 40 semi-annual installments, the first of which will be due on the 1st date on which any interest or other charge on the loan shall fall due, after the elapse of the above-mentioned grace period. The Loan bears an interest at 1.5% per annum, in addition to 0.5% per annum to cover administrative costs and other expenses incurred in the implementation of the Loan Agreement.

Upon signature of this loan agreement, this loan will be the 8th loan extended by the Fund to the Republic of Sierra Leone considering that the Fund had already extended to Sierra Leone 7 loans, the total amount of them is about KD 22 million (i.e. about US$ 74.15 million) to finance projects in different sectors.