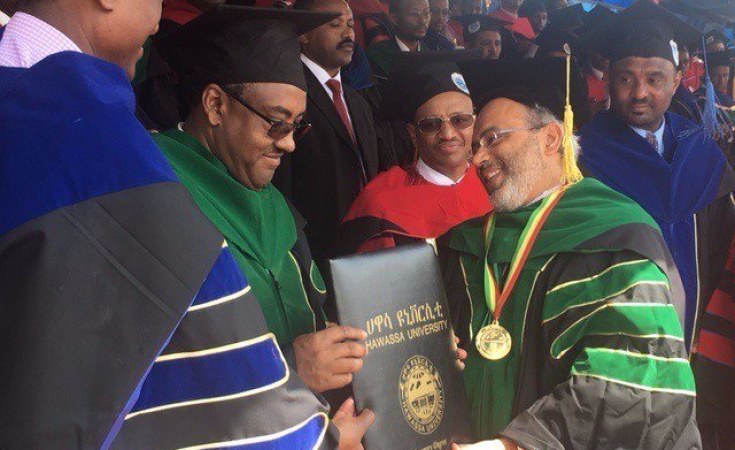 @ECA_Lopes | Twitter
(From Left) Ethiopia's Deputy Prime Minister, Ato Demeke Mekonene, conferring a honorary doctorate of Development Studies by one of Ethiopia's leading higher institution of learning, Hawassa University, on Executive Secretary of the Economic Commission of Africa, Carlos Lopes, in recognition of Lopes' leadership and intellectual contribution to Africa's development on the continent and beyond.
Content from our Premium Partner
United Nations Economic Commission for Africa (Addis Ababa)

Awassa — Carlos Lopes, Executive Secretary of the Economic Commission for Africa (ECA) has been awarded an Honorary Doctorate of Development Studies by one of Ethiopia's leading higher institution of learning, Hawassa University.

The honorary doctorate was conferred by Ethiopia's Deputy Prime Minister, Ato Demeke Mekonene in recognition of Lopes' leadership and intellectual contribution to Africa's development on the Continent and beyond. Present at the ceremony was Arkebe Oqubay, Minister and Special Advisor to Ethiopia's Prime Minister, Haile Mariam Desalegn and Ambassador Mohamed Idriss Farah of Djibouti.

"It is with humility that I accept this Doctor Honoris Causa, from this ever growing and already prestigious University of Hawassa, recognizing my contribution to the field of development studies. I will continue to do my utmost to uphold this honour and trust," said Lopes in his acceptance speech.

Thousands of students who graduated at the ceremony were inspired by his acceptance speech as he passionately spoke about Africa and its future.

"I am passionate about Africa; it has always been a subject of my interest and study," he said, adding it was significant that he was receiving this honour in Ethiopia, an emblem of Africa's liberation and a country rooted in a deep history of pan Africanism.

He congratulated the new graduates wishing them every success in future.

"You are Africa's future," said the ECA Chief, urging the students, as they set out to conquer new opportunities, "should be inspired by renowned figures of Africa's independence like Kwame Nkrumah, Patrice Lumumba and Amilcar Cabral who started their political engagements as young adults."

"Anything is possible. Be fearless, be courageous, be ambitious and have conviction of action," he told the graduates.

"My enthusiasm has been fueled by my conviction that inclusive structural transformation is key to sustainable development in the continent," said Lopes.

He said that the choice for Africa is to use favourable tailwinds to achieve economic transformation, and to accomplish this through industrialization, stating, "we have to confront and change the negative narrative first. This cannot be achieved without changing the mindset."

He said it was high time African economies moved up the global value chain and transform themselves from being mere suppliers of raw materials to producers of manufactured goods as well as suppliers of services to generate jobs, higher wages and diversified manufacturing.

Mr. Lopes hailed Ethiopia as an example of a bold state-led development model with a long-term vision for structural transformation.

"From being one of the poorest countries in Africa, Ethiopia has in a decade and a half metamorphosed to achieve double-digit economic growth, quadrupled its gross domestic product per capita, increased life expectancy by 12 years, and reduced poverty by half," he said.

Hawassa University is ranked amongst the top universities in Ethiopia and is making great strides in responding to issues of interest to Ethiopia and Africa. Approximately 7,000 students were in attendance.

"It is my wish that this university will continue to grow and develop well-trained graduates while fomenting innovative research and responding to societal needs," said Mr. Lopes.