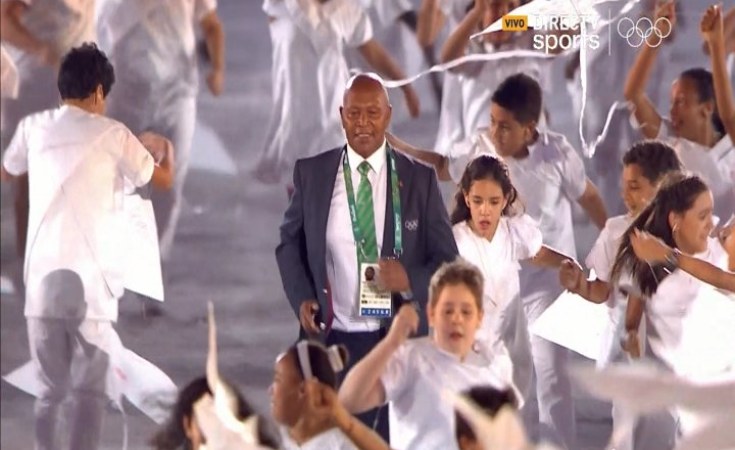 DIRECTV Sports VE | Twitter
Veteran Kenyan athlete and two-time Olympic champion Kipchoge Keino, accompanied by children, runs towards the stage to receive the Olympic Laurel award at the opening ceremony of the Olympic Games at the Maracanā stadium in Rio de Janeiro, Brazil. GE has completed 80 lighting projects across Rio for the Olympic Games - including illumination of the Maracana stadium where the Opening Ceremony was held.
Content from our Premium Partner
GE Africa (Lagos)

Illumination, cameras, action! The Olympic Games as we experience them in the 21st Century wouldn't take place without boosting the infrastructure of host cities. In Rio, 250 megawatts of extra energy is required to run the Games. Twenty percent of that energy, or enough to power a city of 200,000 people, will feed into the International Broadcast Center, the hub for worldwide viewing. In preparation for Rio 2016, the city's power sources, transmission and distribution technology have been transformed. At the same time many traditionally power-hungry projects, such as lighting the Olympic Village, the city and its arenas, have been designed to save the city money and cost-effectively play on long after the last triumphant anthem.

GE's Worldwide Partnership with the Olympic Games is now in its 10th year, and represents an opportunity to bring several of the company's portfolio of businesses—known collectively as the GE Store—to support the pinnacle of sporting endeavour. "Every Olympic Games host city is different in terms of its overall readiness to host the Games," says Christopher Katsuleres, GE's director of Olympic and sport marketing. "In Rio, there was a need for additional power generation for the city as a whole: there were macro city infrastructure requirements and more specific venue requirements."

Turbines turn out to power the Games

GE began laying the groundwork for providing volumes of extra power to Rio in 2011, planning for flexibility and operational stability in the generating grid. To increase supply, it partnered in building thermal power plants around the city, such as the Baixada Fluminense plant which opened in 2014. Deploying GE gas-driven turbines in an efficient combined-cycle system, Baixada Fluminense alone can generate enough power to supply a city of 1.7 million people.

GE Energy Connections worked in tandem with GE Power to design the electrical distribution necessary to deliver increased power to the people: Rio city's 6.45 million population; the influx of 500,000 visitors to the Games; and the 10,000 broadcast professionals who will work night and day at the International Broadcast Center (IBC) to share the passion of the Games with an audience of 5 billion people worldwide.

"The IBC is one of the most critical infrastructure building and facility of the Games, even though it won't host any athletic competitions," says Katsuleres.

"You have more than 20 studios inside the IBC. Some are among the biggest you can find in any TV station in the world," elaborates Sotiris Salamouris, chief technology officer of Olympic Broadcasting Services (OBS), which runs the massive facility. "We're talking about 60,000 square meters of space which is equivalent of more than eight fields of the football game, so there is a lot of cable required to bring all of the Olympic signals between the OBS spaces to all the broadcasters that are here … more than 600 kilometres of cabling just for broadcasting, not to include the power cabling."

Dependable power supply is vital to the IBC. Of the 3,000 uninterruptible power-supply (UPS) units installed by GE around Rio, several help boost the certainty of power to the 11 power rooms of the IBC. In the event of a power failure to any part of the Olympic Games' critical grid—including the various stadiums, team accommodations, the Polyclinic and the hospital—the uninterruptible power supplies  instantaneously supplies backup power to their connected equipment until generators can turn/kick on. "That is the importance of this technology," says Alfredo Mello, commercial leader, GE Olympics. "The people watching the television don't realise that something has happened, because our system immediately is connected to the load."

The requirements of the IBC are necessarily exacting. Three years ago Lanna Caram, lead lighting designer for Current powered by GE, began ensuring that every centimetre of space in Rio 2016 venues would be equally, brilliantly lit to ensure perfect lighting for both athletic performance and for beaming the feats of athletes to their countries of origin and beyond.

"To have competitions seen for broadcast transmission, we need to provide at least three or four times more light than an average project on an ordinary arena that doesn't have special broadcast transmission," she says. Caram explains that in Arena Carioca 3, for example, where fencing and taekwondo are among the scheduled events, "We worked with 200 fixtures, with three different types of lights and each one of them has to be aimed directly at a very specific point on the competition area." Viewers may notice one effect: that each athlete competes without their shadow—alone in their focus, undistracted by their usual doppelgänger.

GE has completed 80 lighting projects across Rio de Janeiro, including illumination of the three Carioca arenas, the velodrome, the massive tennis centre and Maracanā stadium where the Opening and Closing Ceremony of the Olympic Games will be staged. Every venue has its own lighting design. "Depending on the sports and depending on the height available for us to fix the luminaires, we have to adjust the product and lamp type to get the best outcome of the lighting solution as a whole," says Caram.

The gift of efficient, intelligent light

In illuminating the Games, training centres and Olympic Village accommodation, GE has installed around 200,000 energy-efficient lights, half of which are LED technology that ensures more than 50% energy savings on traditional lighting.

As part of its worldwide partnership of the Olympic Games, GE also seeks to leave lasting gifts to the people of the host city. Among its legacies in Rio is the relamping of the city's bayside Flamengo Park, and of the historic central Lapa district.

"Flamengo Park is probably the most beautiful park in all of Rio de Janeiro, but the lighting solution there was upwards of 30 years old and was difficult to maintain," says Katsuleres. Thirty-metre lampposts require the raising of a crane to change a light bulb. LED lamps have at least three times longer lifespan than previous lamps, reducing change-a-lightbulb intervals. Telemonitoring of the new sensor-enabled, digitally connected GE fittings allows the city to know when lamps are failing and to cost-effectively plan maintenance runs.

In addition to refitting Flamengo Park's high fixtures—light from which has long been eclipsed at footpath level by luxuriant growth of foliage—LED lighting has also been installed beneath the canopy, lighting the way for safer strolling after dark. The fixtures themselves provide a gateway to future development of the lighting infrastructure that will enable lighting to, for example, provide pollution monitoring, control traffic flow and offer other smart-city solutions.

The co-ordinated efforts of GE businesses will result in post-Olympic Games Rio enjoying a more abundant and stable power supply and a legacy of sustainable light. And when the world remembers the first Olympic Games hosted in South America, it will be able to picture unforgettable athletic performance in super-real, sweat-beading, incredibly moving images.