The Olympic Games in Rio de Janeiro, Brazil, is officially underway. One of the highlights of the Opening Ceremony was the first-ever presentation of the Olympic Laurel Award to veteran Kenyan athlete and two-time Olympic champion Kipchoge "Kip" Keino. Keino, who runs a charity for orphans in Kenya, was accompanied by children as he ran through the brightly lit Maracana stadium and up the steps of the dais to collect the award. GE has completed 80 lighting projects across Rio for the Olympic Games - including illumination of the Maracana stadium where the Opening Ceremony was held. Maracana stadium will also be the site for the Games' Closing Ceremony on August 21st. Read more about illuminating the Rio games. More about GE in Africa in this BRIEFING. 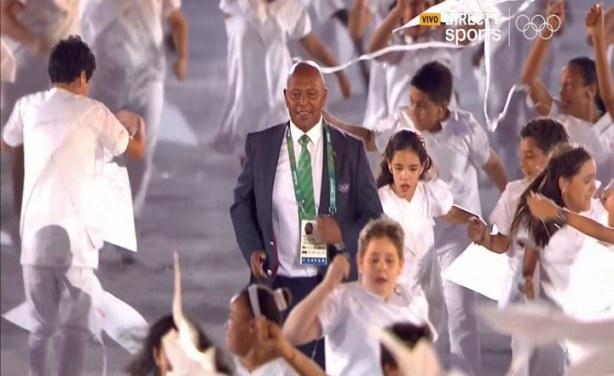 Veteran Kenyan athlete and two-time Olympic champion Kipchoge Keino, accompanied by children, runs towards the stage to receive the Olympic Laurel award at the opening ceremony of the Olympic Games at the Maracanā stadium in Rio de Janeiro, Brazil. GE has completed 80 lighting projects across Rio for the Olympic Games - including illumination of the Maracana stadium where the Opening Ceremony was held.