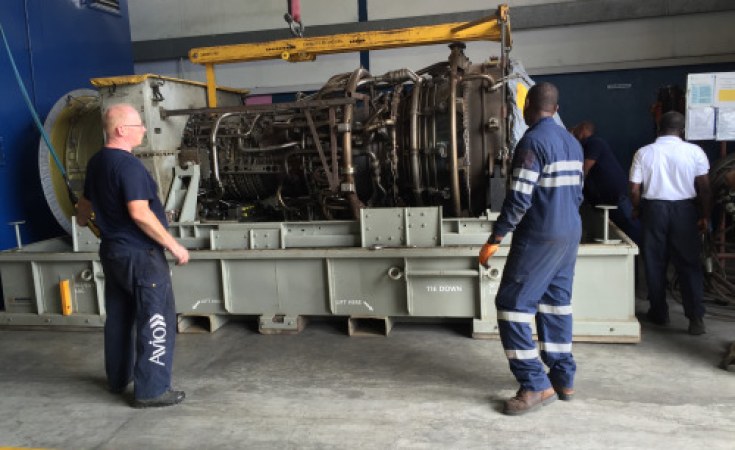 Africa’s largest cement plant in Obajana, north central Nigeria, owned by the Dangote Group, produces up to 30, 000 tons of cement daily. It will now record a major milestone as GE has been commissioned to undertake a highly specialised maintenance job –  a PTR or “partial tear down” of a LM 6000 gas turbine – only the second time such complex work has been done in Africa.

Since 2014, the Obajana plant has been powered by four GE LM6000 gas turbines with a combined capacity of approximately 200MW. The engines, which can run on natural gas or diesel, have provided reliable and efficient power in a county where the electricity supply can be erratic.

This year, one of the 51MW  turbines developed a leakage. These gas turbines are huge – to put this in perspective, they are some 20 meters long and nearly 10 meters high, and weigh up to eight tons. Shipping the turbine to the GE depot in Houston, the United States – or just the combustion rear frame (CRF) section where the  fault occurred – would have been a costly and time-consuming exercise.

As such, GE took the decision to  repair the LM6000 engine in Nigeria, leveraging its worldwide network to  assemble the people, parts and tools needed to undertake this skilled and delicate work. The turbine was transported to the southern Nigerian city of  Port Harcourt, 438km from Obajana, where spare parts arrived from Houston and specialised tools from Norway and Singapore.

Wiebe Van der Werff, a GE expert  field service engineer said that, excluding logistics, transportation and customs costs, such a repair would have amounted to $3,5-million if the turbine had been transported to Houston. But doing the repair in-country would cost less than $1-million. “We couldn’t do the repair in Obajana because it requires a standard overhead crane and a properly prepared environment. Obajana has just a standard crane and the workshop environment and air quality are not up to the required standard,” said Wiebe.

Wiebe added that this was a highly delicate operation, which is normally carried out at a depot. But given that there are specialist field service engineers working on the  project, he was confident of the GE team’s ability to complete the repairs.

The project lasted about three weeks and involved disassembling the CRF of the gas turbine. Every part was then inspected and replaced, or repaired as necessary. Upon completion of the repairs, the turbine was transported back to Obajana and reinstalled at the Dangote plant, which was itself a major logistical challenge. 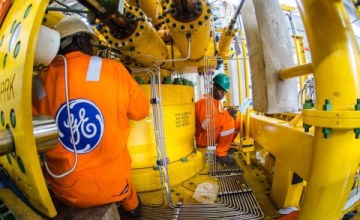 First Full Refurbishment of a Subsea Production Tree in Nigeria

GE Oil & Gas has completed the first refurbishment of subsea production trees at its service base in Onne, Nigeria, highlighting GE's commitment to investing in Nigeria and demonstrating the high-value services offered close to our customers' operations. The milestone was achieved under a contract awarded by Shell Nigeria Exploration and Production Company (SNEPCo.)

Lead Field Service Engineer Sadiq  Ayomide was excited about the repairs and said that this shows that GE Power Solutions can be localised to the benefit of customers whenever the need arises. “A similar job was done in Tanzania at the customer’s workshop, so this is only the second time such a major repair is being done in Africa. This is a very delicate job. All procedures and standards have to be followed to the letter to achieve success,” said Ayomide.

GE Project Manager Adiuku Nwabueze said: “It gives me confidence to see that with proper planning, we can execute complex projects in Nigeria by using our global resource base. We expect to be able to find the cause of the leakage and repair as well as assemble the unit,” said Nwabueze.

Uzo Ezimora, Strategic Account Executive, Dangote for GE said: “It’s achievements like this that make you very proud to work for GE. We have opened up a new chapter in terms of delivering world-class service with local teams and structures. No one should underestimate the complexity  of such maintenance… or its significance for our esteemed customers.”

“This is a very important project  for GE and for our expanding operations in Africa,” added GE Nigeria President  and CEO Dr Lazarus Angbazo.

“By undertaking a service project of this scale and complexity in Nigeria, we are helping to expand our skills and capacity in this region. GE is committed to assisting Africa’s development through the investment of $2-billion in facility development, skills training and sustainability initiatives across Africa by 2018.”

“Not only has the decision to do the work locally significantly reduced costs for our client, it has enabled GE to undertake the project with minimal disruption to production at the Dangote plant. Successful completion of this project will give confidence to  Dangote – one of our key customers and partners in the African market – and to other existing and potential customers that we can carry out service and support work at this level in the region. This is important given the increasing interest in our gas turbines for power generation on the  continent,” concluded Dr Angbazo.