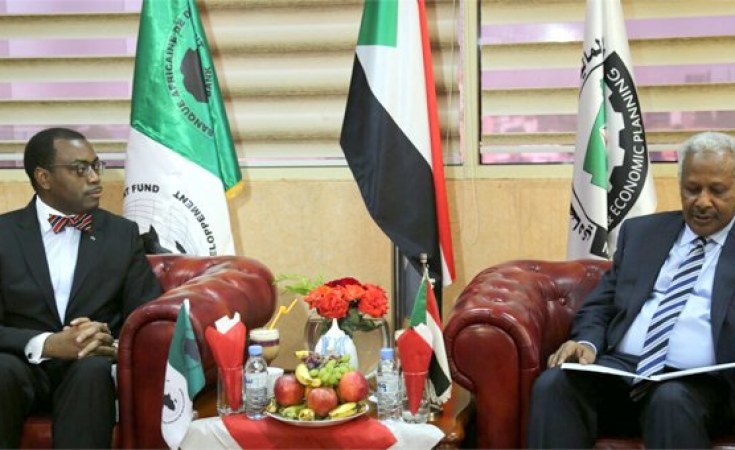 On Monday, February 27, 2017, the President of the African Development Bank, Akinwumi Adesina, met the Sector Ministers of the Government of Sudan to reinforce the Bank's support to the country's economic development. The meeting, which discussed the Bank's current and future interventions in Sudan, was chaired by Badreldin Mahmoud Abass Mukhtar, Minister of Finance and Economic Planning (MoFEP) and Governor of the AfDB. The meeting was attended by the Ministers of Agriculture and Forests, Industry, Water Resources and Electricity, Welfare and Social Security, Health, and Education. Discussions with the Ministers focused on the challenges confronting their respective Ministries as well as the assistance required from the Bank.

For his part, President Adesina expressed concerns over the low retention and high drop-out rates for girls, as well as high proportion of girls out of school (3 million), which he said should be addressed head on.

The State Minister of Health, Somaya Akad, focused on three areas, including the need for human resource development, a national centre for cancer treatment, and a surgery centre. The Minister noted that the Government's policy is to ensure that a health facility is available within 5 kilometres across the country. Currently, national health insurance coverage stands at 43%.

The Undersecretary in the Ministry of Welfare and Social Security, Ali Mohamed Kheri, gave an overview of the Bank-financed Inclusive Service Delivery Project, which is supplementing the Government's social safety net program providing cash transfers to about 5,000 households. She noted that the Bank-financed projects will go a long way in complementing the Government's efforts in alleviating poverty. President Adesina noted that the national poverty survey conducted by the Bank will be useful in identifying eligible participants under Government's social safety net program, while at the same time feed into the Poverty Reduction Strategy Paper (PRSP) under preparation.

The Minister of Water and Electricity, Mutaz Musa Abdallah Salim, expressed three main concerns including the interconnection with the Renaissance Dam in Ethiopia, technical losses of about 24%, and solar power generation of about 1,000 MW. President Adesina raised questions relating to utility efficiency, role of the private sector in solar generation, tariffs, and non-technical losses, which were all addressed by the Minister. 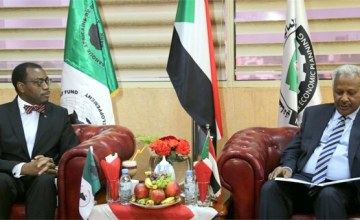 According to the Minister for Animal Resources, Musa Tibin Musa, challenges in his Ministry include traditional systems of rearing, migration of livestock owners to neighbouring countries, lack of incentives due to sanctions, inadequate amount of vaccines and sanctions. On account of these constraints, he expressed the need to develop cattle ranches to promote keeping large-scale livestock in enclosed places and thus prevent migration, aquaculture, and reduce transboundary diseases. The Minister identified seven projects costing US $16 million, which will be presented to development partners including the Bank for financing.

In response to these concerns, President Adesina intimated that the Bank has undertaken two interventions which will go a long way in addressing conflicts between pastoralists and farmers. These interventions include the Water Sector Reform Project in West Kordofan and the Drought Resilience and Sustainable Livelihood Program for the Horn of Africa. He also noted that the Bank is working on the Technology for African Agricultural Transformation (TAAT) program, which he said will be useful in scaling up improved technologies to boost food production in the context of the High 5s (particularly Feed Africa), and underscored its importance of the TAAT for reducing malnutrition, which currently stands at 16% in Sudan, and stunting, which is currently at 33%, among others.

The Minister of Industry, Mohamed Ali Yousif, indicated that the Economic Reform Programme (ERP) places great emphasis on industrialization. However, despite this emphasis, he lamented that industrialization in Sudan is slow because of lack of industrial skills, infrastructure and sanctions. He indicated that the Government needs US $500 million, of which US $200 million will be provided by the private sector to create industrial zones. He requested the Bank to launch an Initiative called "Made in Africa". He also requested the Bank to establish an Industrial Institute to develop industrial skills for making spare parts, among other things.

The AfDB President, Akinwumi Adesina, expressed the need for the participation of small and medium enterprises (SMEs) in the Government's industrialization program, which should be the cornerstone of the industrial zones that the Government intends to create in six states.

The Minister for Mineral Resources, Ahmed Mohamed Sadiq Al-Karuri, noted the Government's intention to stop the use of mercury by 2020 in conformity with international agreements. He requested for an Integrated Laboratory Project to analyse samples locally with a view to saving foreign exchange.

The Minister of Oil and Gas, Mohamed Zayid Awad, requested for support for Khartoum Refinery in the sum of US $200 million to enhance its sustainability.