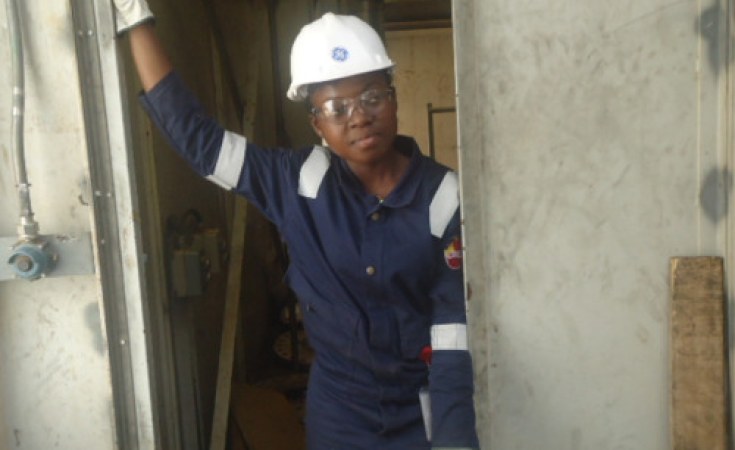 GE
Leticia Oppong has always wanted to pursue a career in science and engineering. She encourages young women not to give up on their dreams of becoming scientists.
Content from our Premium Partner
GE Africa (Lagos)

A young Ghanaian engineer, who constantly had to justify her passion for science to everyone she came across, believes that if young women are firm in their beliefs, they will  succeed. Leticia Oppong currently works for GE in power services as a field service and technical advising specialist for power plant control systems. She believes that having more women in STEM  roles will result in increased creativity, and innovation as products, and services delivered will be informed by the perspectives of a diverse workforce.

Leticia said that girls who have an interest in STEM (science, technology, engineering and mathematics) careers will be inspired to follow in the  footsteps of other successful women in STEM and should therefore be exposed to more female role models in these fields.

When asked about her experience in a male-dominated field, Leticia admitted that there have been occasional instances of prejudice. “Some people see you on site and immediately assume that as a woman, you don’t have what it takes to execute the job. Working with such people can get frustrating.” Leticia also found that some sites, understandably, did not have female washrooms and because she would have to share with the guys, she had to find ways of managing this.

“My  home country is Ghana, however, I’m part of the Sub-Saharan African pool of  field service engineers covering assignments within Africa and globally, as the  need arises.” Leticia initially joined GE in 2013 as an intern with the power services team in Ghana, where during the one-year internship, she was sent to selected sites to work with field teams and to also provide administrative support to various businesses in the GE Ghana office.

“My  interest in engineering had been solidified some time after junior high school. I developed an interest in taking apart electronic devices to figure out how they work and to try to fix them. My father is an electrical engineer and I watched him work around the house. That certainly played a part because  I wanted to fix things like he did.”

Growing up, Leticia knew she wanted to be a scientist. “There was an educational programme on TV that I watched quite a lot as a child. It was called The Know-How Show.” She was fascinated by the scientific illustrations on the show and this sparked a curiosity that led her to read a book about a power blackout. In the book, there was a picture of a woman in full safety gear on a utility pole. “I remember  thinking, ‘that’s what I want to do when I grow up’.”

“My father was against me moving into the engineering field from the start. He said a woman had no future in engineering and suggested I study pharmacy. I had to explain to him why I wanted to do engineering. He finally gave in  after we consulted a lecturer who convinced him that there was room for women  in engineering.”

“My career at GE is fairly young and I’m still being mentored. So far, I’ve had the opportunity to attend some university career fairs to share my story with young people who have an interest in the field and hopefully, to inspire them  to stay on course. I plan to continue doing this and to take on younger female engineers as I progress further.”

Leticia studied electrical/electronic engineering at the Kwame Nkrumah University of Science and Technology, Ghana’s premier institution for the study of engineering. Following her studies, her first training was at the Energy Learning Centre in Niskayuna where she completed the entry-level training for Mark VIe Control Systems. As part of her training, Leticia did on-the-job training for six months on sites in the United States and Nigeria, also attending a leadership training course in South Africa.

“So far, I’d say my first job was the biggest. I was assigned to support on an upgrade job at a site in Japan for two months. The job scope included working on a 9F.03 gas turbine unit with DLN 2.6+ and model-based control, and  it was technology I had no experience with. It was challenging adjusting to the culture of the people, especially overcoming the language barrier. Thank God, I pulled through and it was a success.”

“I love field work, but there will come a time when I have to make a change so I can grow in my career. When that time comes, I will opt for a role where I can still support the execution of field jobs with the experience I’ve  garnered.”

To other young women experiencing difficulty in convincing their parents of the viability of a career in science, Leticia advises them to make a case for what they want. “It’s not easy, but it is possible. Don’t lose your passion or your faith. There is an increasing need for innovative solutions in energy and other infrastructure sectors. A STEM career gives you a chance to be at the forefront of breakthroughs in science and technology that will change our world.”