Ghana - Apesika Abom Feeder, the Story of an AfDB-Financed Feeder Road That Changed the Everyday Lives of Rural Households 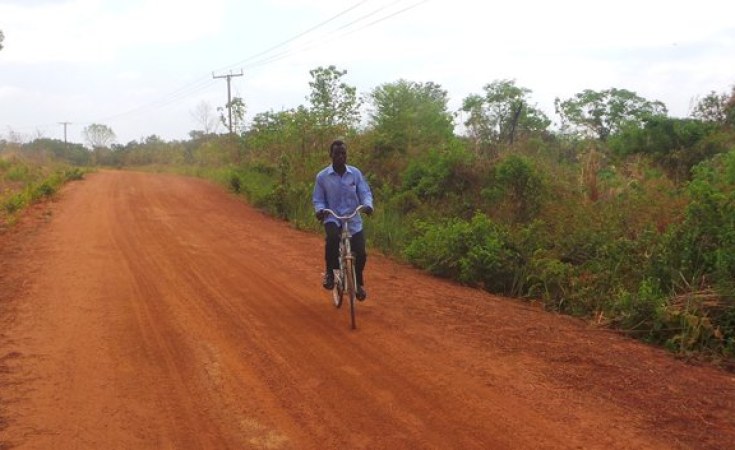 Photo: AfDB
Abom Konkomba is a small and remote village in the Kintampo South District of the Brong-Ahafo Region.Ghana, where farming is vital for the communities. In fact, access to the community was challenging for teachers to come to teach, for women to go to the hospital, for framers to sell their produce after harvest. Access to the agricultural inputs (seeds, fertilizers) as well.
Content from our Premium Partner
African Development Bank (Abidjan)

One of the beneficiaries using the road

In many African countries, food security and nutrition continue to be a challenge. To address this in Ghana, the African Development Bank (AfDB) and the International Fund for Agricultural Development (IFAD) have joined forces to co-finance the "Northern Rural Growth programme" (NRGP). The project was launched in 2009, to contribute to equitable and sustainable poverty reduction and food security in the various districts in the Northern, Upper East and Upper West Regions as well as seven adjoining districts of the Brong-Ahafo Region. Overall, the AfDB has injected USD 61.20 million in the project while the IFAD's support was USD 22.73 million.

Abom Konkomba is a small and remote village in the Kintampo South District of the Brong-Ahafo Region.Ghana, where farming is vital for the communities. In fact, access to the community was challenging for teachers to come to teach, for women to go to the hospital, for framers to sell their produce after harvest. Access to the agricultural inputs (seeds, fertilizers) as well. "The village was breathless," a community member said.

The poor infrastructure in Abom Konkomba was the main impediment to its growth. In fact, there was no road to access the communities and this had been a major headache to the District Assembly. Farmers shunned the community because of the poor road and lack of storage infrastructure. The intervention by NRGP was therefore timely. The intervention included the construction of a 8.7km feeder road which links Abom to Apesika, passing through a number of communities including Abom Konkomba. This has, not only considerably improved the living conditions of farmers, but also the general living standard of members of communities in along the Apesika-Abom Feeder road. "Before the construction of the road, the village was not attractive," said another community member. "But when the road came we realized that more strangers came to settle here and they even improved their building materials. Instead of thatch roof some of them deployed aluminum sheet to roof their houses. Electricity and water sewerage facilities have been extended to make the village more attractive. Over 20 commercial farms have been established in the village. We are seeing new buildings cropping up all over, we are seeing and feeling life in the village," he emphasized.

The construction of the road has also had other social benefits because, currently, the communities have access to the hospital especially for women in labor: "Prior to the construction of the road, women would walk long distance and struggle for transportation to the hospital. Now, the road is good and many public and private transportation cars come and take you to the hospital on time. That has helped in reducing incidence of women dying when they are in labor," said one women.

The construction of the feeder road has also improved education in the village: Formerly, during the raining season, teachers who traveled from the main town to the community would not come to work, because of the difficulties accessing the village but the new road has changed their habits. Now, teachers come even when it rains and the children attend classes at all times," a primary school student explained.

Farmers were particularly the happiest of the community following the feeder road construction. "Farming was in fact not a major problem. The village has a high agricultural potential. Our major problem was related to access to the markets. When we were lucky we could get a car to take our produce that we sold in town and we paid 10 Ghana Cedis per bag (100kg)," said Elisabeth Manu, a 46-year old farmer. "Now after the intervention of NRGP, access to market has become easy because the road is good, the car charges us less for transport fee than before, and (1 Ghana cedi per bag (100 kg)" Elizabeth added.

Farmers now have access to improved agricultural inputs. As a result their productivity has increased tremendously, from 0.8MT per Ha to 3.5 MT for maize. And like many other farmers, Elizabeth is able to produce (per harvest) 15 bags of cowpea, 02 bags of beans, 01 bag of pepper and other crops. Her incomes have equally improved (price of cowpea bag is 120 Ghana Cedis/ bag, 300 Ghana Cedis/ bag of Bambara beans, 10 Ghana Cedis/small crops). She employs 6 people to help her and her husband in the farm, and she is now able to pay her children's school fees (02 in senior school and 02 in primary school). With current market prices Elisabeth is expecting a remarkable increase after this harvest that would yield more than 1500 Ghana Cedis profit after deducting labour cost and transport.

Nigaar Paul 27 years is also one of the beneficiaries of the road. As a permanent staff in the rural hospital, he used to help his father in the farm on some occasions. When asked about the impact of the road, he explained: "I used to walk for more than 30 minutes to work. Now I am proud and happy to note that, from my house, I can get to the the office in less than 5 minutes. With the road my father can increase his production, as he is confident the road would link him to the markets to sell all his produce," Paul stressed.

Happy, but we still need the support of NRGP

"We are happy. The African Development Bank has really helped us and changed our lives. Formerly, we could not send our children on errands outside the community. The road was not safe. Now with the construction of the bridge, there is no threat of drowning when they cross from one end of the road to the other. The road is good but there is still one small portion left that needs to be completed. We would be grateful if a junction culvert is constructed by the District Assembly with the help of Project..."

Since agriculture is the major activity that helps in reducing poverty and creating wealth in Northern Ghana, the farmers are also asking the Bank to build a dam so they will be able to continue farming even during the dry season.