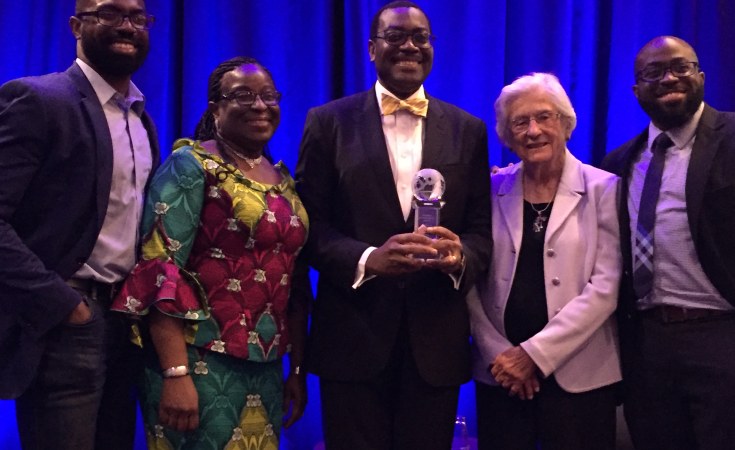 "... I accept it because it will spur me to continue my passion and commitment to ending hunger and malnutrition globally and in Africa."

The President of the African Development Bank Group (AfDB), Akinwumi Adesina, was honored with the 2017 Gene White Lifetime Achievement Award by the Global Child Nutrition Foundation (GCNF) in Washington D.C., on Tuesday, 13 June 2017.

The award is in recognition of Adesina's lifelong work towards advancing agricultural development which has contributed significantly to food security, particularly in Africa.

"A champion of nutrition, Dr. Adesina co-hosted the first official meeting of the African Leaders for Nutrition in 2016, and serves on the Global Panel on Agriculture and Food Systems for Nutrition," the organisation said.

In his acceptance speech, Adesina underscored the importance of food, nutrition and the need to banish hunger and famine in a world full of surplus food and over-consumption, where annual food losses in developing countries are estimated $310.

In Africa's case, food wasted can feed 300 million people in a continent where 250 million do not have enough food each day, he said, emphasizing the need to reduce food losses along the food chain, improve food distribution and target supplementary food supplies to poorer households.

He commended the United States' Supplemental Nutrition Assistance Program, noting that "Undernutrition remains the single largest contributor to child mortality and nothing sums up more precisely the appalling tragedy of unfulfilled human potential than a stunted child."

Good nutrition is critical to building "grey matter infrastructure" that builds a healthy and productive workforce for the future, he said, adding that unlike physical infrastructure that can be repaired, stunting that arises from malnutrition is irreversible.

"Governments across the world must invest in grey matter infrastructure, " Adesina said, noting that he established the 'African Leaders for Nutrition' (ALIN) with other world leaders such as Bill Gates, Aliko Dangote, Kofi Annan and ex-President of Ghana, John Kufuor.

In Africa, 58 million children under the age of five are short for their age (stunted), 13.9 million weigh too little for their size (wasted), and 10.3 million are overweight, underscoring the importance of building Africa's grey matter infrastructure for its development.

"It is not just a social issue or just a health issue. Economic progress in the continent is being undermined by malnutrition which costs African economies around 11% of GDP annually - at least $25 billion annually in Sub-Saharan Africa. Malnutrition leaves a lasting legacy of pain and loss. Stunted children today leads to stunted economies tomorrow," he said. In the course of a distinguished career as agricultural economist, development expert, Minister of Agriculture and Rural Development and President of the AfDB, Adesina has spared no effort to make agriculture the centre-piece of economic transformation, jobs creation and overall wellbeing of people.

Adesina recounted an interesting family experience that bonded him to agriculture and dedicated the Award to Rotimi, his son who has recently completed his residency program in paediatrics at the world famous Crozer-Chester medical center in Pennsylvania, and concluded his remarks by quoting the renowned Greek Physician, Hippocrates: "Let food be thy medicine and medicine thy food".

The 2017 Gene White Lifetime Achievement Award complements a long list of global laurels earned for Adesina's leadership and work in agriculture. In 2010, UN Secretary General Ban Ki-moon appointed him as one of 17 global leaders to spearhead the Millennium Development Goals, along with Bill Gates, the Spanish Prime Minister and the President of Rwanda. He was named Person of the Year by Forbes Africa magazine in 2013.

The Award for Child Nutrition was created in 2004 to honor individuals who have made outstanding contributions to the worldwide dream of ending childhood hunger. The award is given in the name of Gene White, who has dedicated her life to the nutrition and well-being of children.