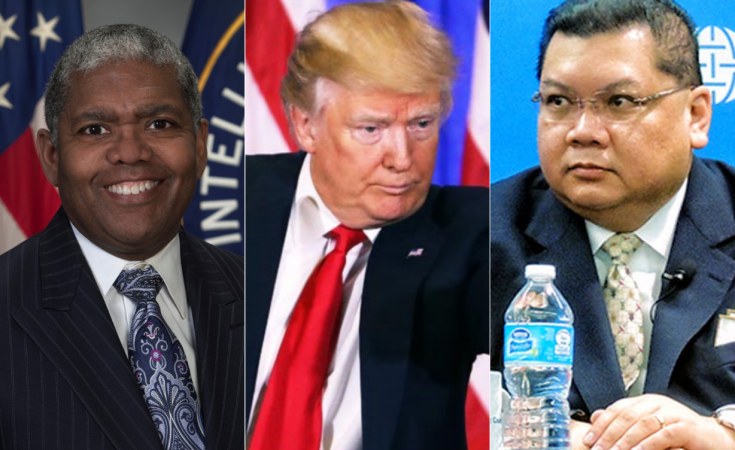 allafrica.com
Two Africa posts to be filled by Trump administration? Cyril Sartor (far left) from the CIA may be picked to direct Africa at the National Security Council in the White House. J. Peter Pham from the Atlantic Council may be named Assistant Secretary of State for Africa.
allAfrica.com

Washington, DC — "We must change the lenses with which we look at Africa from the traditional development mindset to an investment mindset," Akinwumi Adesina, president of the African Development Bank (AfDB), told last week's U.S.-Africa Business Summit.

"American companies come to Africa bringing their notebooks, while the Chinese companies come to the continent with their checkbooks," Adesina said in his keynote address in which he urged a reversal in the sharp drop in Africa's exports to the United States since 2014 and encouraged American firms "to take a closer look at the opportunities Africa has to offer."

Some 800 private-sector and government participants from Africa and the United States took part in the three-day gathering, a biennial event that CCA has hosted in various locations in the United States and Africa since 1997.

"The Summit provided one of the first opportunities for African leaders, U.S. and African CEOs and other stakeholders to engage with the Trump Administration on the important issues impacting the U.S.-Africa economic relationship" said Florie Liser, CCA's President and CEO.

"Africa is moving steadily on a trajectory of economic growth and increasing self-reliance ‐ a vision this Administration supports," Commerce Secretary Wilbur Ross said his opening address - the first Africa policy speech by a senior Trump team member. "Africa is a place of opportunity," he said, quoting President Trump when he met African leaders at last month's G7 summit in Italy.

Ross called trade relationships "vital to the security and stability of both the United States and Africa" and expressed continued support for the African Growth and Opportunity Act (Agoa), which has been a centerpiece of U.S.-Africa policy since 2000. But he added a warning, saying that countries benefiting from Agoa trade preferences must "continue complying with the eligibility requirements established in U.S. law," he said.

"Bilateral trade agreements, rather than large, multilateral ones, can be very effective tools in meeting the long-­‐term interests of the partners involved," the Commerce Secretary added, in a signal that Agoa is likely to be deemphasized in favor of trade pacts with large countries such as South Africa.

"Secretary Ross reinforced that the administration will be looking for ways to continue to expand trade with Africa," which many participants found "reassuring", Dr. Jeffrey Sturchio, the CCA Board chair, told AllAfrica.

Witney Schneidman, senior advisor for Africa at Covington.& Burling who served in the State Department under president Clinton, had a similar take on Ross's speech. "The good news," he wrote in his Brookings blog, "is that the Trump administration appears to understand the importance of the African market."

Interest in Africa by U.S. firms has been on the rise in recent years. A major reason, as noted by speakers throughout the conference, are positive metrics reported by – among others - the IMF, World Bank and McKinsey&Company (in a study titled Lions on the Move):

In attendance to pitch American firms were high-level representatives from a number of African governments. President Filipe Nyusi of Mozambique, in his keynote, cited regulatory changes that make his country "a safe and strategic" investment destination. He urged American firms "to take advantage of the enabling business environment and investment opportunities and potential that exist in Mozambique."

After addressing the Summit, Nyusi was received at the State Department by Secretary Rex Tillerson. Their previous meeting was in September in New York, when Tillerson was Exxon CEO when they discussed the company's plans to invest and explore for gas.

President Hage Geingob of Namibia planned to take part but cancelled after the death of liberation movement icon Toivo Ya Toivo. His finance minister, Calle Schlettwein, spoke about Namibia's development agenda and the President's plan to eradicate poverty.

Topics explored during the more than 30 panels and plenaries ranged from agribusiness, health and security to infrastructure and logistics, regional cooperation, the role of women in business, workforce development and renewable energy. There were also sessions on doing business in Ghana and Angola.

One area of interest for a number of attendees was technology as a key to helping African countries fast-track economic development. Discussions touched on "ways to leapfrog" old technologies and not be hindered by old ways of looking at Africa," said Sturchio, the CCA chair who heads the New York-based global health strategy consulting firm RabinMartin.

He cited the lively presentation by Chris Maroleng from MTN, who chronicled the explosive growth experienced by his company - Africa's largest cell phone provider. One innovation on display at the meeting was the partnership between Computer Frontiers and the Lesotho government that bolsters tourism by using an e-visa platform. Yes, visitors can get visas online at evisalesotho.com!

Another company at the meeting, Hello Tractor, demonstrated it Uber-like platform that gives African farmers access to tractors they can't afford to buy but need to use to increase productivity and income.

CCA hosted a gala reception for Summit attendees at the Smithsonian National Museum of African Art, where the former CCA president and CEO, Stephen Hayes, was honored for 17 years as head of the organization. He retired and was replaced by Liser in January.

On the final day, a memorandum of understanding was signed between CCA and Ecowas, which includes 15 countries totaling over 340 million people. According to Liser, the agreement is designed to assist U.S. and African companies "by improving the 'doing business' environment and, among other things, organizing trade and reverse trade missions."