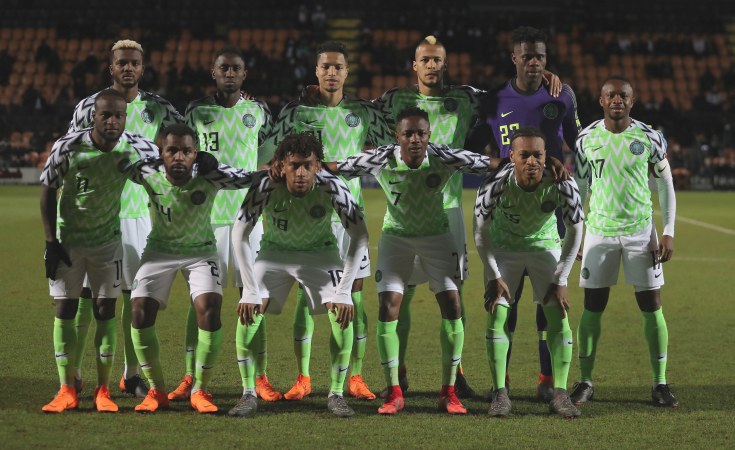 What a dramatic game it was between the South Americans and the Super Eagles. Fans burst into tears when a late Marcos Rojo goal gave Argentina a dramatic victory over Nigeria.

This sees Argentina move on to the round of 16 after beating Nigeria 2-1 at Saint Petersburg Stadium.

How the game played

The whistle blew as the game started. The atmosphere was electric and by just looking at the crowd, you could swear Argentina have definitely won the battle. Millions of Argentines filled the stadium - cheers, whistles being heard left, right and centre.

Both sides looked nervous as passes were going astray. The Argentina team had five changes to their starting team with Di Maria and Marcos Rojo returning to the starting lineup. But was this enough? As for Nigeria, the team didn't change. Super Eagles coach Gernot Rohr kept the players that won over Iceland. Because if it's not broken, why fix it.

Argentina seemed to have gotten into this game with the aim to win.  Aggressive tackles were coming in as they tried to take charge.  Messi was playing a little more centrally, probably to ensure he gets a little more of the ball than he did against Croatia.

14 minutes in Lionel Messi found his rhythm as he made an absolutely superb goal.  Why did we doubt him?  His goal gave Argentina a 1-0 lead over Nigeria.  It was a goal you'd expect from one of the best players in the world.  Messi's goal was the 100th of the 2018 World Cup, and his first goal for this  World Cup tournament after he missed a penalty against Iceland.

"Messi! Messi! Messi!" the Argentinian fans chanted. They were certainly making themselves heard!  To think some doubted his commitment to the cause.

All the intensity and momentum belonged to Argentina now. Messi looked like he had a bit more energy than he did in the Croatia game. The Super Eagles were even not giving him room to breathe as they were defending every turn he took.

The Super Eagles needed to keep their cool and find their way back. There was still plenty of time to get what they needed.  But the Nigerians looked very nervous as Argentina grew in confidence. It was up to Nigeria to up the tempo.

Di Maria raced through on goal and Balogun clipped his heels just outside the area. The Argentinian side are looking for a red card but Balogun gets away with a yellow card.

Seems like Uzoho is back on his feet as he executes one of his brilliant saves.

However, 40 minutes in, Nigeria seemed like they were soaking up pressure.

Half time and not looking good for Nigeria

As it stands, Argentina have a pretty good chance to go through to the round of 16.  Nigeria have not offered enough and need to give their all in the second half! Croatia and Iceland are still goalless, which means that Argentina are through as it stands. A goal in either game could change the picture significantly though. A goal for Nigeria would take us back to square one and put the Super Eagles back into second place, two points ahead of Iceland and Argentina.

Lionel Messi has been playing very well. All this time he seemed like he wasn't ready for the World Cup. The second half will be very interesting.  There is still a long way to go and there is work to be done.

Second half under way

Nigeria needs a miracle to get through.  They started with some spark but have lost that since falling behind.  If they don't pick up the pace, they will go home.

An interesting start to the second half as Nigeria is awarded a penalty after a quick VAR check. Mascherano is penalised for holding Balogun.  Remember, it isn't over until the VAR had its say - and a penalty is awarded.

Victor Moses is taking the penalty! Cool as a refrigerator, Victor Moses casually strolls up to the ball, waits for Armani to move to the right and then rolls the ball to the other side!  This gives Nigeria the upper hand. It will be fascinating to see what this does to Argentina's approach.

That only means one thing - plenty of drama so far. More to come here?

Argentina are banging on the door looking for a goal that will send them through to the knockout stages but Nigeria are remaining firm in defence. The game still hangs on a knife-edge. As it stands, the Super Eagles are in a fantastic position, taking them to six points and tightening their grip on the runners-up spot.

Argentina hasn't created any chances since Nigeria's goal. They are short of ideas. We all knew beating Nigeria is easier said than done. The Super Eagles are now brimming with confidence. That outstanding performance against Iceland gave them much confidence and even provided a helping hand to the knock-out stages in group D wide open.

Pressure is too much now at 75 minutes

Musa finds space down the left and drills a low ball back into the middle, where the ball is deflected up and then smashed at goal by Ighalo - but it's wide of the mark.  Rojo heads the ball on to his arm and Nigeria  wants a penalty for handball.  After a long delay, the referee runs to to check the monitor. And decision has been made - no penalty.  Argentina  are starting to look very bad. Where's the saviour Messi?

Argentina's fans have broken out in loud song to try to revive their heroes as their World Cup hangs in the balance here.

Marcos Rojo scores for the South Americans at the 87th minute.  It's a stunning goal... Funny enough, Rojo scored the winner when Argentina  beat Nigeria at the 2014 World Cup. Argentina, as it stands, are through to the round of 16.

But this isn't over yet. A  Nigeria goal can change everything.  Can they find an equaliser in the four minutes of added time?

Soccer makes very little sense sometimes. When you think you finally have the upper hand, then a goal happens. So disappointing for Nigerian fans.

Incredible noise fills the stadium as the Argentina fans give a sign of relief after securing a spot in the round of 16. Nigeria had a good second half and had a couple of chances but failed to capitalise.  Nigeria's exit means Senegal are the last African team with a chance of reaching the second round.