A Report on the 2018 IPI World Congress, Abuja, Nigeria 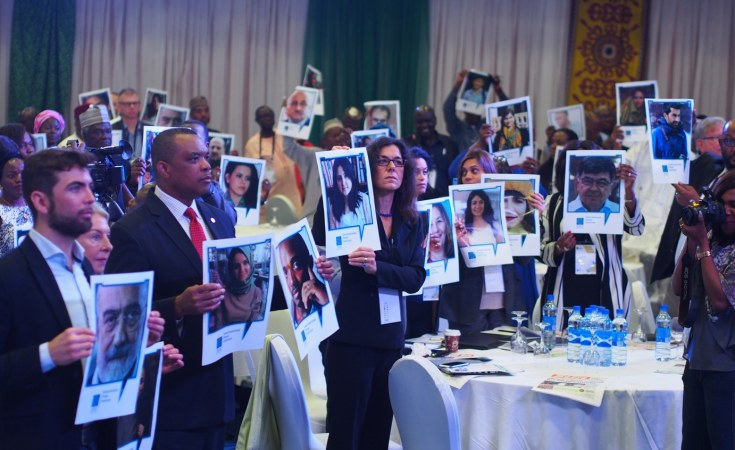 Photo: IPI
Under the title "Why Good Journalism Matters: Quality Media for Strong Societies", the 2018 IPI World Congress was held in Abuja, Nigeria, from June 21 to 23, 2018.
Content from our Premium Partner
International Press Institute (Vienna)

Under the title "Why Good Journalism Matters: Quality Media for Strong Societies", the 2018 IPI World Congress was held in Abuja, Nigeria, from June 21 to 23, 2018. Organized in partnership with Nigeria's leading news and journalist organizations, as well as other international partners, this year's IPI World Congress aimed at affirming the indispensable role of quality media in strengthening democratic structures of open and inclusive societies, fighting corruption and strengthening the rule of law. The Congress showcased examples of quality, resilient journalism as well as investigative stories and projects that bring positive change to individuals and communities in Africa and around the world.

As every year, the 2018 World Congress proved to be an important platform for journalists, editors, publishers and media experts from around the world to exchange best practices about their profession and present a united front in reminding state officials of their duty to protect press freedom, strengthen independent media and ensure journalists can operate without fear of retaliation.

In opening the IPI World Congress in Abuja, IPI Executive Board Vice Chair Dawn Thomas said: "In accepting Nigeria's invitation to hold the World Congress in Abuja, the IPI General Assembly felt it was time for IPI's global community to come to Nigeria, to talk to those leading editors, publishers and journalists, who work hard every day to deliver quality news to their audiences in this part of the world. And to listen to those visionaries who for many years have fought many battles to ensure that, in spite of the challenges that Nigeria faces, in spite of the complexity of the socio- political reality in the country, the freedom of the media to cover these challenges and this reality remains unscathed. Many of them will be with us in the coming days."

IPI Executive Director Barbara Trionfi echoed Thomas's words in her own remarks highlighting global press freedom challenges: "As we gather here today from 40 different countries to open IPI's 67th World Congress, there is a sense that independent journalism is under attack and that press freedom has eroded all over the world. [...] But as journalism is under attack, the journalist community has been coming together in unprecedented solidarity. [...] This IPI World Congress was made possible by those individuals, news organizations and other institutions who have come together to organize this event because they believe that press freedom and independent, public interest journalism need to be supported by all of us in any way we can. [...] The IPI World Congress is the gathering of those who have chosen to join hands to fight against anybody who wants to silence the press."

The IPI World Congress programme in Abuja included a mix of workshops and training sessions, panel discussions on some of the hottest topics in the news, keynote speeches by leading journalists and visionaries, and social events hosted by Nigeria's state representatives.

Some of the Abuja Congress sessions were particularly impressive and attracted extensive participation and media coverage. These include:

The 2018 IPI World Congress Opening Ceremony, held at the Presidential Villa, and hosted by the president of the Federal Republic of Nigeria, Muhammadu Buhari. The ceremony kicked off with a panel discussion featuring four Nigerian federal government ministers on key challenges facing the country. The discussion was moderated by leading Nigerian publisher John Momoh, chairman/CEO of Channels Media Group and an IPI member. In his address to the attendees, President Buhari welcomed the more than 330 participants and stated: " Good journalism promotes good governance ."

The Forum started with a discussion on recent political transitions on the continent and how they might be expected to affect independent journalism. Several of the panellists expressed concern about a loss of trust and support from readers and viewers, a concern reflected in the World Congress's main theme, "Why Good Journalism Matters".

"We can fight governments in any turn, but people do not understand that if freedom of media is eroded, their freedom goes next", Gwen Lister of Namibia Media Trust remarked. "How does journalism get back the support of the people in challenging those undemocratic environments that still exist on the continent?"

The challenges of covering terrorism in Africa were also discussed at the Africa Media Forum, with Hamza Idris, politics editor for Nigeria's Daily Trust newspaper, noting that, besides the psychological trauma and the life-threatening risks, journalists in Nigeria who still brave the danger to cover Boko Haram generally lack insurance and many, especially those based in the volatile northeast, go unpaid.

Congress participants also stood up in solidarity with journalists imprisoned all over the world.

Marques, who has braved decades of harassment and prosecution to expose corruption and human rights abuses in Angola, was named as IPI's 70th World Press Freedom Hero. He was prevented from traveling to Nigeria due to a court case in which he was accused of insulting Angola's former attorney general in an article scrutinizing murky real-estate transactions. Marques was acquitted of all charges in early July.

Rappler, a Philippine news website founded in January 2012, was previously announced as the recipient of the 2018 Free Media Pioneer award in recognition of its innovative approach to journalism and audience engagement as well as its determination to hold authorities accountable despite aggressive attacks on its operations. Initially distinguishing itself by embracing crowdsourcing, citizen journalism and social media, Rappler has since grown into one of the Philippines's most popular and effective investigative journalism outlets, providing critical coverage of the administration of President Rodrigo Duterte, who has presided over a deadly war on drug users and attacked the rule of law.

"This is for everyone all over the world who has continued to do good journalism despite being harassed, jailed and having their work hijacked by algorithms." Glenda Gloria, Rappler managing editor and co-founder

Marques called the award a "gift of hope that many Angolans are celebrating as their own triumph over the entrenched power of (the country's) bandits" He added that "This award is not for me. It mirrors the hopes of many Angolans that changes will not come simply from political decision-making, but from a growing
awareness amongst and stand from civil society."

Interview with Nobel Laureate Wole Soyinka: The IPI World Congress interview with Nobel-Prize-winning author, poet, essayist, and societal analyst Wole Soyinka, including a question-and-answer session with participants, was one of the highlights of the 2018 Congress. Outspoken, direct and highly critical, Soyinka said his country could achieve 70 percent degree of press freedom "in a couple of years, if we don't count the grey areas" involving "submission to pressure of which the public is not aware". Hate speech, government pressure and harassment of journalists were just some of the topics Soyinka addressed.

OUTCOMES AND IMPACT OF THE 2018 IPI WORLD CONGRESS

1. 330 participants from 37 countries attended the three-day World Congress in Abuja.

The World Congress programme featured 65 expert speakers, 40% of whom were women. The Congress was organised in partnership with 30 Nigeria-based news organizations, journalists, editors and publishers' associations, as well as civil society organizations active in the defence of press freedom and journalism safety.

Thanks to the support of partners such as Konrad Adenauer Foundation, MacArthur Foundation Nigeria, UNESCO Nigeria, IMS and Free Press Unlimited, IPI was able to provide support for more than 40 journalists, reporters, TV anchors and radio broadcasters from different regions in Nigeria, to attend the full programme of the IPI World Congress.

3. President Abubakar Bukola Saraki and Muhammed Musa Bello, Minister for the Federal Capital Territory. They addressed Congress participants over the course of the three evening receptions they hosted and shared their views about journalism in Nigeria and underscored their commitment to strengthening press freedom in the country.

Over the course of the Congress, participants highlighted the imprisonment of Nigerian journalist Jones Abiri, attracting public attention to the case and calling for government action to clarify the reason for his reported long-term detention without trial. Minister of Information and Culture Lai Mohammed expressed his commitment to IPI to look into the case.

T: IPI @globalfreemedia 5 jul. Human rights lawyer files a suit against #Nigerian DSS on behalf of journalist #JonesAbiri held in custody for two years without charges. IPI had raised the issue with President Buhari at the IPI World Congress via @NewsPulseNG #IPIWoCo

4. The relevance of importance of press freedom and quality, independent journalism for building strong societies received broad coverage in the run-up to and during the IPI World Congress in Abuja. The Congress also offered an opportunity for local journalists to meet and interview some of the most respected media personalities from around the world. Similarly, international participants had the opportunity to gather first-hand information about socio-political developments in Nigeria. Please find links to articles and interviews in Annex 1 of this report.

5. Over 100 journalists from Nigeria and elsewhere had the opportunity to attend workshops offered by IPI over the course of the IPI World Congress and so further develop their journalistic skills. The workshops were greatly successful, and in some cases the schedule had to be extended to accommodate the great interest expressed by participants, who saw the workshops as an opportunity to learn from well-respected international practitioners. Workshop topics included: Online Safety for Journalists, presented by Facebook; Covering Elections, organized in cooperation with International Media Support (IMS), UNESCO Regional office, Abuja and the Nigerian Independent National Electoral Commission (INEC); Surveillance of Journalists, offered by Free Press Unlimited (FPU); and Gender Diversity in the Newsroom, organized in cooperation with FPU and Africa Media Initiative (AMI).

Tagged:
Copyright © 2018 International Press Institute. All rights reserved. Distributed by AllAfrica Global Media (allAfrica.com). To contact the copyright holder directly for corrections — or for permission to republish or make other authorized use of this material, click here.