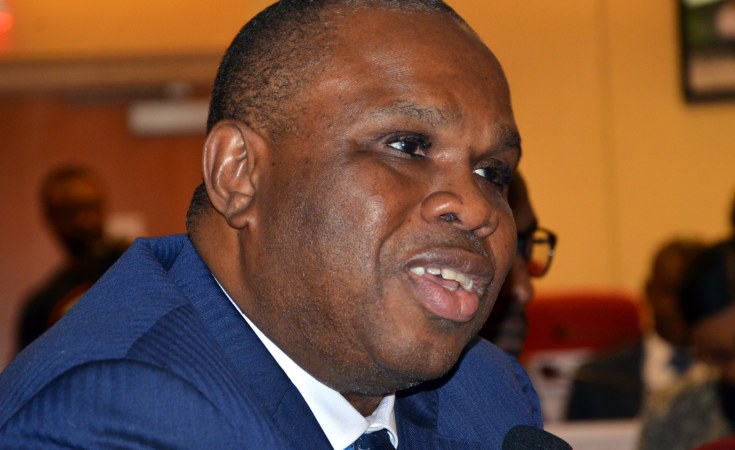 The African Export-Import Bank (Afreximbank) is one of the long-established but lesser known continent-wide institutions. Created by African governments and private and institutional investors from Africa and elsewhere, the bank promotes and finances the expansion of both intra-African and extra-African trade. Dr. Benedict Okey Oramah, who has been president and chairman since September 2015, has been with the bank since its inception. He spoke with allAfrica last month in New York.

How does the Afreximbank differ from other African financial institutions?

We are the continent's premier trade finance bank - the only institution primarily focused on promoting inter-regional trade, Africa-South trade, and the expansion of non-traditional exports - that is helping Africa to diversify away from commodities. Like other EXIM banks, we help countries advance trade, especially their export policy. The mandate is to promote finance and expand trade.

The bank has grown tremendously. I know this because I was here from the beginning. We started in 1993 with six people, including the president, in a small office at the World Trade Center in Cairo - with a balance sheet of just about $120 million, and first-year profits of $5 million.

Today the bank's total assets are over $12 billion, excluding contingents. Shareholder funds are about $2.5 billion. Total revenues we expect to be about $1 billion dollars by the end of the year. We now have a staff of over 200 people and offices in Cairo, Abuja, Abidjan, Harare and one in Kampala about to be opened.

So it is a transformed organization. We started by focusing primarily on traditional trade finance. But today the bank has a menu of facilities. Trade finance is our bread butter, but we also do export development finance, project finance, guarantees, emergency programs like the counter-cyclical trade liquidity facility, the food emergency contingent trade finance and facility (where we offer to help countries that suffer from episodic drought to be able to manage without spending so much money on grain reserves).

We are also doing a lot of facilitative work. In collaboration with the African Union, the Egyptian government and a few other partners, we are holding the first ever inter-African Trade Fair in December in Cairo during December. We just launched the MANSA platform – a platform for conducting African customer due diligence, which is intended to reduce the compliance cost of doing business with African entities. The cost of compliance is a key issue for access to trade finance. We are building a payment settlement and clearing platform, working with Central Banks. The idea is to facilitate greater inter-African trade by reducing the foreign policy content of the trade. So the bank has dramatically transformed.

How has the newly agreed African Continental Free Trade Area (ACFTA) impacted the work of the bank?

The agreement that was signed in March is what this bank was created to pursue, and we partnered with the African Union to do a launch in Kigali. Shortly after that, the African Union formally accredited African Export–Import Bank as an AU member. For us, it is a game changer. It is going to help the bank focus more on the primary reason it was created - to promote inter-regional trade. The ACFTA will begin to overcome barriers, making it possible to systematically tackle challenges to inter-African trade because now the political support and political will is there. We believe it is the African Export–Import Bank that will determine that ACFTA becomes successful.

Africa is a small actor in world trade. What needs to be done to change that?

Total Africa trade comes to about one trillion dollars, which is small in the scheme of things -  around three percent of global trade. This makes Africa substantially de-linked from the global economy. We think that the route to expand that is greater inter-African trade. Africa is still a marginal player because it is heavily commodity-dependent, receiving, at most, 10 percent of the total market of each of those commodities.

The total global market for cocoa, for example, is about 120 billion dollars. Africa gets seven to eight percent, sometimes even only five percent. Same goes for coffee and gold. For petroleum products, Africa accounts for just 10 percent of the total production but less than two percent of market value.

It's like Africa is a donkey working for everybody- we produce what creates wealth but we get next-to-nothing for it because we do not add value to it. Those who add value and provide the services that support it make all the money and then export part of it back to us. What will change that is to ensure that Africa begins to gain a dynamic comparitive advantage in producing certain kinds of goods.

Africa is a donkey working to create wealth but getting little for it.

If we create value chains, add more value to our commodities and create the services that are required, we will capture more value from the commodities we produce. When we do that, our share of global trade will expand. There is no doubt about it. But if we continue to trade in commodities, we will continue being marginal players rather than serious players in the global market.

Value-add is widely discussed these days. Is it happening?

Yes, I think there is more seriousness about it. But there are flaws in the way it is implemented. Focusing on the value addition to commodities may be right in some instances, but I don't think it is always correct. Where Africa has comparative advantage may not be in commodities but in labor. We have comparative disadvantage in capital.

For example, adding value to bauxite to produce aluminum requires heavy capital investment, which I may not have. But I could continue to export bauxite or even alumina. But I will import aluminum ingots to press them into sheets - the last mile that requires intensive labor.

Another example is cotton. Traditionally, you take cotton, gin it into linen, spin it into yarn, get fabric and make garments. If you spend a million dollars on ginning cotton, the amount of jobs you create is far less than if you spend a million dollars at the end of the value chain making garments. You can export the cotton raw, import fabric and make garments. If you spend 10 million in making garments, you will probably employ 1000 workers, grow your exports and build more factories. Ginning the cotton will cost you more money, create less jobs - because it is capital intensive and you don't have the money. In a capital-scarce economy, it may make sense to export the raw materials then get something close to where you can use labor intensive activity to produce what you can re-export.

How does Africa get the skilled labor required for the development you are describing?

Too little attention is paid to labor. We used to have technical schools, but they died because people were approaching industrialization from the capital intensive-end. If you are focusing on the labor-intensive part of the value chain, developing labor becomes integral to your plan. There will be some lag in developing the labor.

Lack of trade information – a product of colonization – is vital to spur investment.

One way to develop labor is to open your borders. Allow people in other African countries to come and work for you and train your people. Rwanda does it. When you start tackling the labor-intensive part of a value chain, you start checking the boxes: (1) do we have people? (2) if yes, do we have qualified people? (3) what investments do we have to make?

How is the bank addressing Africa's infrastructure shortfall?

Many people say that the biggest challenge for Africa is infrastructure. It is a big challenge. But we believe the infrastructure constraint is not the sole reason for low inter-African trade. Infrastructure in Africa today is able to support one trillion dollars of trade. So why is inter-African trade's share only $170 billion? Why is it not $400 billion?
For us, the answer is "trade information." Because of Africa's colonial history, the continent was balkanized. There is no information flow. Someone who is in Egypt does not know that someone who is in Guinea needs pharmaceuticals that he or she manufactures. Someone in Guinea who wants to buy a car does not know about cars manufactured in South Africa.

That is why we are sponsoring the Inter-African Trade Fair – to spur the flow of trade information. We also are building an online platform to breakdown that information constraint. We believe if we break it, it will boost inter-regional trade. We will then deal with infrastructure which will then help overall trade, including inter-African trade.
If you see the estimates, Africa requires $90 billion a year for infrastructure. Where is the money going to come from? Infrastructure development needs public-private partnerships. Unless you have the trade information to create the opportunities, private money will not come. When the trade information shows that things can happen and things start happening, then private money will see that building roads or railways on a commercial basis will make sense. That's when the infrastructure investment we need will start coming.