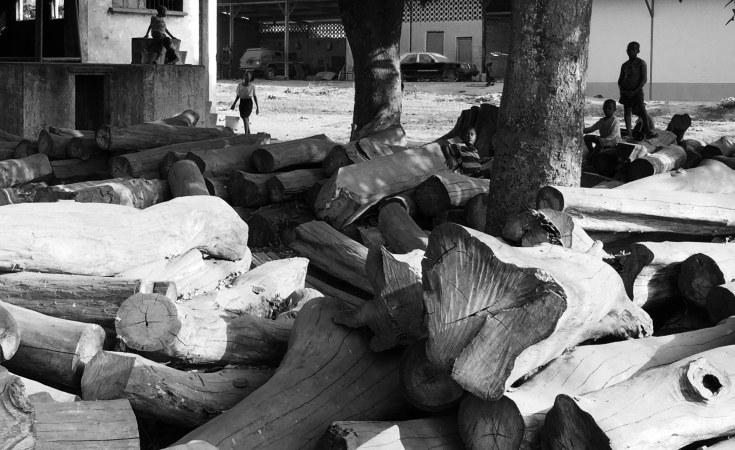 Washington, DC — A new report by the Environmental Investigation Agency (EIA), Authorized Plunder, documents how the sale of 180,000 rosewood logs in Guinea-Bissau, enabled by the Secretariat of the Convention on International Trade in Endangered Species of Wild Fauna and Flora (CITES), is fueled by high-level corruption, encourages illegal logging, and threatens local communities. The chaotic sale appears to be pushed by influential Chinese traffickers – the same ones benefitting from the operation – and driven by the Guinean government's need to reimburse a default loan to the International Monetary Fund (IMF).

Following an April 2012 coup, Guinea-Bissau descended into chaos, and illegal logging exploded. Illegal loggers and their backers in the military brutalized community leaders who stood up against the plunder of their forests. Timber exports from Guinea-Bissau to China, the world's largest importer of illegal rosewood, surged from 61 tons in 2007 to 98,000 tons in 2014 – an equivalent of 255,000 trees exported in just one year.

Pursuant to heavy pressure from civil society, in April 2015 the new government issued a moratorium, which is still in place, on all timber felling and export for five years. The ban resulted in massive seizures of illegal logs. Guinea-Bissau, one of the smallest countries in Africa, has subsequently accumulated one of the largest timber stockpiles on the continent, estimated to exceed 400,000 logs.

The CITES Secretariat endorsed the stockpile sale in January 2018, when a previous CITES trade suspension on Guinea-Bissau was lifted. The Guinean government – under pressure by the IMF to reimburse a default loan, and encouraged by the World Bank – had lobbied the Secretariat to greenlight the stockpile sale, despite the existing ban. In addition, the Chinese embassy and Chinese traders pushed the government to recommence the rosewood trade. Insiders reported to EIA undercover investigators that an influential Chinese trafficker even traveled to Geneva with the Guinean government delegation to lead the negotiations with the CITES Secretariat in order to free the illegal logs.

EIA found that large volumes of the timber authorized for sale are not controlled by the Guinean authorities, making it easy for traffickers to mix them with fresh illegally cut trees, which yield higher prices. The sale is carried out by the traffickers themselves, and is primarily controlled by high military officials. One trader explained to undercover investigators: "There are also sons of officials selling logs to us. No ordinary people will do this business. All of them are connected in some ways." Another trader noted: "The key here is to bribe."

The sales period was originally scheduled to end in April 2018, but has since been extended until the end of the year. Guinean officials overseeing the sale told EIA that the plan is to continue extending the deadline and thus enable the laundering to proceed for months in order to harvest and sell fresh timber and bypass the moratorium, using CITES to give the guise of legitimacy to the process.

EIA's Policy Manager Susanne Breitkopf stated: "This stockpile sale amounts to a massive laundering exercise, benefitting criminals and putting Guinea Bissau's forests and its people in grave danger. It also sets a worrying precedent for other countries facing challenges regarding the disposal of seized illegal timber. This corrupt operation makes a mockery of CITES' global mission and must be stopped immediately."

Guinean civil society has denounced the rosewood crisis ravaging the country for years, in particular through radio programs enabling otherwise voiceless rural communities to share their fears and frustration. On December 15, local civil society is organizing a full day of talks on the issue in the capital Bissau, expecting participation of community leaders and local officials who have witnessed the harmful impact of the rosewood sale. Roundtable discussions will be followed by a public concert with the participation of national artists; more than 2,000 people are expected for the mobilization.

Tagged:
Copyright © 2018 Environmental Investigation Agency. All rights reserved. Distributed by AllAfrica Global Media (allAfrica.com). To contact the copyright holder directly for corrections — or for permission to republish or make other authorized use of this material, click here.