Zimbabwe: The Struggle to End HIV Epidemic in Rural Mwenezi 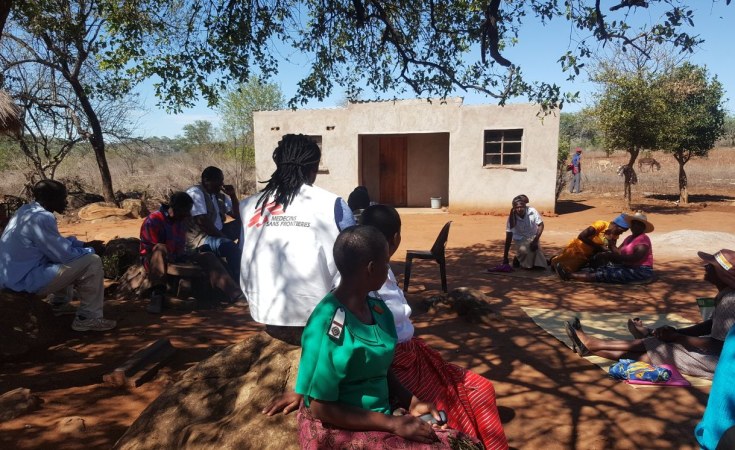 MelodyChironda/allAfrica
Patients and MSF team meet at an outreach in Mpani village.
allAfrica.com
By Melody Chironda

Mwenezi — On the steep hills and mountains of Mwenezi - a rural district situated in southern Zimbabwe - is where you find hundreds of villagers living with some of the highest rates of HIV infection, leading Medecins Sans Frontiers and other aid organisations to step in.

The district, bisected by the infamous Mwenezi River and the highway that connects Beitbridge town to the border with South Africa, is prone to droughts and low rainfall. The majority of households in Mwenezi, Masvingo Province, depend on agricultural production, like livestock rearing. Access to medical care remains a complex notion with basic amenities already overstretched to meet the growing demands of the village.

Transportation from rural areas to urban clinics is too expensive and prevents people from receiving treatment. People living with HIV in these areas used to travel long distances, as far as 60km or even walking up to four days to collect their antiretroviral medication (ARVs) from the closest clinics.

The situation becomes dire during the rainy season as muddy creeks cut across the road, and rivers become flooded, leading many to find it difficult to travel. Many local's mode of transportation is donkey carts - which they call "greyhounds" - because they use them to travel long distances. Sometimes, the long winding and bumpy dirt roads will be filled with holes that only big cars can only manoeuvre.

This difficult in accessing medical attention and clinics led many people living with HIV to skip or stop taking their ARVs.

Medecins Sans Frontiers (MSF), also known as Doctors without Borders, launched a project called Out of Facility Community ART Distribution (OFCAD) that ensures that drugs were administered in hard to reach remote areas. MSF uses outreach programs to check in with patients and to ensure that they are adhering to their treatment regimen. They provide treatment and combat stigma for hundreds of people, many of whom live in poverty.

Through the OFCAD model, the community health workers are trained to connect patients in rural areas with the care they need and, help those living with HIV to get medical treatment. They are trained to distribute ARVs to registered people living with HIV in their communities. They collect the medication from the nearest clinic after every three months. They keep the medicines in their houses and are charged to check if it has expired and that every member is collecting their ARVs. People living with HIV are then referred from clinics or outreach points to the village health workers and can collect their ARVs.

There are other organizations that are beginning to make gains in the fight against this trend. MSF supports the Zimbabwe's Health Ministry as well as other organization like BHASO - Batanai HIV and AIDS Service Organisation - a community-based organisation that mobilises people in the community.

However, even with the outreach points, MSF noticed that some patients were still travelling long distances to collect their medication. Medecins Sans Frontiers then introduced more ways for patients to get HIV treatment and care closer to their homes. MSF started filling healthcare gaps in services provided by other organisations, and adapting its activities as needs arose. This included supplying and providing medicines when the hospitals and clinics don't have.

MSF also introduced Community ART Groups (known as CAG) and family refills with the aim to reduce the number of visits to the health centres or hospitals. These models helped to improve patient access and adherence to treatment. The CAG has helped to reduced costs on time and travel and reduction of clinical visits as one family member could go and collect medication for the rest of the family. Group members rotate attending the health facility to pick up ARVs for the whole group. With the help of MSF, the OFCAD method has helped many people living with HIV greatly reducing the chance of defaulting from treatment. Many villagers in Mwenezi only sing praises to the MSF program.

Meet the woman helping the community to live positively

Silethiwe Paswana is a support group leader in Mpani North. Paswana discovered that she was HIV positive in May 2018. Her husband died in 2008 and she has two children. She became a volunteer to give a face to HIV and give it a voice in her community. She helps the community to get to know their viral load and encourages them to get tested. Paswana is happy with the assistance from MSF and encourage others to get care and treatment as soon as possible.

A nurse mentor with Doctors Without Borders, Tinashe Mbirimi, said that MSF started the Mwenezi HIV/TB project in March 2016 where it mainly focused on providing treatment and care for HIV and drug-resistant tuberculosis patients. Mbirimi added that while visiting clinics, they noted that many patients were late presenters to care and treatment with most of the patients already having advanced HIV, there was many defaulters, many not attending follow-up appointments and many not regularly taking their medication due to patients travelling long distances with no clinics nearby. Thus, in September 2016, they started an outreach programme in Mwenezi.

Being HIV-positive is not the end of life

54-year-old Zephanath Gondo has been living positively for nearly a decade. He went for HIV testing after he heard about blood testing at a clinic. He went three times and was always diagnosed at negative. Unfortunately at his fourth visit, he tested positive. "I started attending lessons and taking 20 pills a day but I had difficulties because I used to travel from Mberengwa to Makugwe village, a distance of 25 kilometres or three days just to get healthcare service," Gondo said. "Being HIV-positive is not the end of the world, it's just the beginning of a whole new way of life," Gondo said. Gondo gives praise to MSF outreach program and God for his health and has since moved to Mpani North - closer to the outreach clinics where he travels less than 2km.

Social, economic factors in the context of HIV/Aids

The current economic situation is not helping either as many young people in Mwenezi migrate to neighbouring countries such as Mozambique, Botswana or South Africa and elsewhere in search of something to survive on. Women whose husbands are migrant workers are especially vulnerable to HIV, as their spouses may have other sexual partners. Similarly, some women may engage in transactional sex to earn money or other commodities in times of economic insecurity. In a rural setting people are less likely to know how to protect themselves against HIV. In badly affected areas, many households take in sick relatives and foster orphans, which reduces the amount of food available for each household member. As a result, nutrition levels tend to drop and people's health is compromised further.

For years now, Zimbabwe has suffered a political upheaval that has left thousands of people in desperate need and the country's health system in a state of collapse.

A cry from a chief

Chief Mazetese in Mwenezi district has appealed to the people and the government to donate more clinics and help finish building a clinic that is now at the window level. Chief Mazetese also spoke about his people dying because of lack of treatment and knowledge of the disease. He raised a need for more help with tuberculosis treatments in the village.

The ring cases of TB patients is worsened by food insecurity, large numbers of people living in destitution, lack of balanced diet and crowded and often poorly ventilated homes. The chief only wish is to improve the lives of his people. Chief Mazetese appreciated the works being done in the community by MSF staff.

Medicins Sans Frontières is an private organisation providing medical aid where it's needed most and delivers emergency aid to people affected by armed conflict, epidemics, natural disasters and exclusion from healthcare. Find out more about MSF's work: https://www.msf.org/zimbabwe

How MSF's Rural Programme for HIV+ Villagers Has Worked