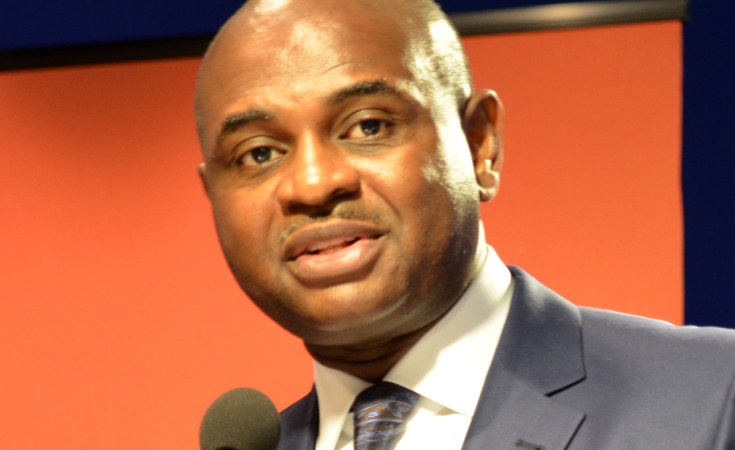 This month Nobel Laurate Wole Soyinka, one of Nigeria's best known and most admired citizens, and the Citizen Forum with which he is associated, endorsed Dr. Kingsley Moghalu for president of Nigeria.

It was a high-profile sign of the growing popularity of the candidate seen as the only viable alternative to those of the two largest parties, both veteran politicians in their 70s.

Running on the ticket of the Young Progressive Party, 56-year-old Moghalu is a lawyer, political economist and author, who has been a university professor, a United Nations official, a deputy governor of Nigeria's Central Bank, an executive of the Global Fund to Combat Aids, Tuberculosis and Malaria.

A devout Christian from the southeast in a country torn by religious divisions, he picked a Muslim woman, Mrs. Umma Getso, as his running mate. She is a political activist and entrepreneur from Kano State in the north.

In a statement, Moghalu said his choice of Getso “is a recognition of her talent, leadership ability and commitment to a better future for the youth of Nigeria. He repeated his target of appointing a cabinet that is half women, and he hailed Getso’s “passion for the education of the girl child…”

Soyinka and other Moghalu supporters say the candidate’s record of accomplishment and public service is accompanied by a detailed and concrete plan of action to transform Africa’s most populous country – a vision which has been articulated in books, articles, policy documents and public appearances.

While Moghalu’s proponents recognize the challenges facing a low-budget campaign in a country where vote buying is widespread and wealthy ‘godfathers’ can turn out huge crowds for their choices, they argue that Nigeria may not survive another four years of “recycled” rulers.

Nigeria is one of the starkest examples of the rich-poor gap that is growing worldwide. The country has Africa’s largest economy, an independent and feisty media and a thriving business and professional sector. But it also has a restive youthful population and an unemployment rate that grew from a reported 5 per cent in 2010 to over 23 per cent in 2018, a lack of electricity even in the major cities, poorly resourced schools, endemic corruption; one of the globe’s highest rates of mother/child death; low levels of immunization; and the largest burden of malaria in the world.

It is plagued by conflicts – militias in the oil-producing south, a Boko Haram insurgency in the north and mounting conflicts in the central area between farmers and herders competing for land that is adversely affected by climate change.

Moghalu told AllAfrica that all those urgencies can be tackled effectively, “with organization and execution”. Nigeria today is unable to meet its targets – for energy, food, security or reducing corruption, he said, due to a “lack of effective governance strategy, from the federal government especially”.

“Nigeria can and should feed itself again,” he said. “But to do that, you need investments in technology-driven, high-yield agriculture.” He cited an example of multi-factor challenges his strategists would have to address to move Nigeria from a large-scale importer of food to producing enough, and preserving enough, to feed its people and to have an excess to earn revenues: “How do you move goods from cultivation to storage? How do you move them from storage to processing? How do you move them from processing to export? These value chains are areas where we will focus specific Investments.”

Moghalu has plans for spreading electricity among the country’s 200 million people – where providing centralized grid power would be decades away – by building an alternative system, heavily based on renewable sources, such as hydro and solar. He has outlined strategies for expanding the tax base and implementing more efficient collection and for tackling the country’s crippling debt obligation – which has ballooned in the past three years from U.S. $10 billion to $22 billion.

Ask him anything – he has a plan.

He outlined a method for providing access to primary health care for all Nigerians, that he believes would improve survival rates for women giving birth and for their babies and would reduce the toll of diseases, including malaria.

He thinks a government led by him and his running mate could unite Nigerians around solving problems rather than competing for resources and power by exploiting divisions.

In the end, Moghalu said, delivering services and transforming Nigeria is about ability, leadership, plans, strategies, discipline and execution.

Buhari Versus Atiku - Who Will Win 2019 Presidential Election?
Tagged:
Copyright © 2019 allAfrica.com. All rights reserved. Distributed by AllAfrica Global Media (allAfrica.com). To contact the copyright holder directly for corrections — or for permission to republish or make other authorized use of this material, click here.