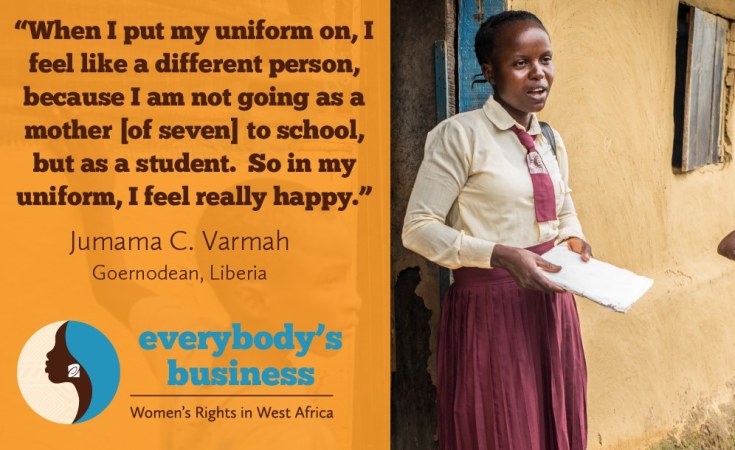 Women make up more than 50% of West Africa's population and are more economically active than anywhere else in the world. Their families, communities, and countries are built off the strength of their labor, and yet, they are frequently pushed to the margins.

So how do ordinary West African women overcome these obstacles?

The West African region alone contains hundreds of distinct ethnic groups and thousands of languages and dialects. As such, there is no single portrayal of a typical West African woman.

There is, however, one thing that unites West African women – each must face weighty expectations that accompany being a woman in West Africa.  From an early age, these women are often expected to be fully responsible for the young and the sick, to cook the meals, clean the home, get an education (or be prevented from getting one), honor their family name, get married (sometimes by force), bear children, resolve conflict, keep the peace, and work to support the home.

It's no wonder that 41% of women in Nigeria are entrepreneurs, or that women comprise 70% of the workforce in Liberia; that some girls in Niger still fight against the injustice of forced marriage, or that women still juggle a full professional life alongside domestic care in Senegal.

The women in this documentary are not First Ladies or parliamentarians. They do not occupy the highest echelons of society, nor have great wealth. Yet, like most West African women, they are extraordinary, because each of them, in her own way, handles the daily pressure and affects positive change in her family, her community, and her country.

Tagged:
Copyright © 2019 Open Society Initiative for West Africa. All rights reserved. Distributed by AllAfrica Global Media (allAfrica.com). To contact the copyright holder directly for corrections — or for permission to republish or make other authorized use of this material, click here.