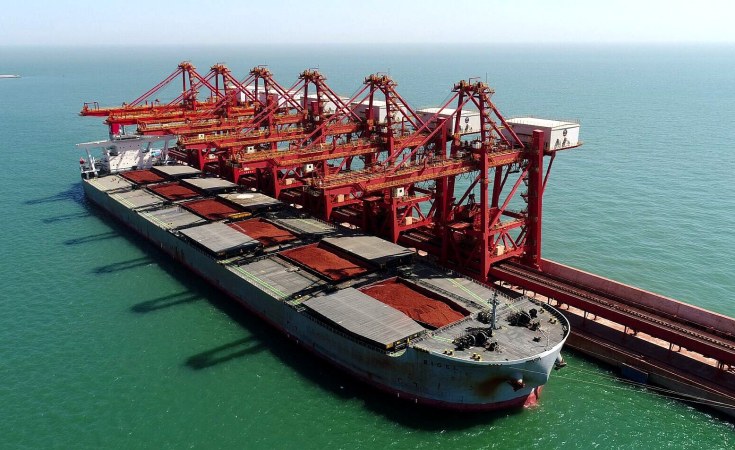 The Rigel, a 300,000 ton-ship
Content from our Premium Partner
35Nord (Paris)
press release

Yantai, China, May 10, 2019 - While the SMB-Winning Consortium is still targeting an increase in bauxite production in Guinea for the year 2019 above 40Mt, the Rigel ship, with a transport capacity of 300,000 tonnes of ore arrived at the port of Yantai in China this week after being loaded at the port of Boké in Guinea. From both the Consortium's and the shipping industry's point of view, the arrival of this bauxite shipment is a new record in terms of tonnage for bauxite transport.

While mining operators traditionally evacuated ore by rail in Guinea, the SMB-Winning Consortium relied on Winning Alliance Port as early as 2015 to transport bauxite by barge up the Rio Nunez River before being loaded onto capesize ships (around 200,000 tonnes) on the high seas. From the river port of Boké, composed of the Katougouma and Dapilon terminals consisting of nine docks, the SMB-Winning Consortium exports its production to China, amounting to 36 million tonnes in 2018.

The port of Yantai confirms its position as a hub for the transport of ore to China in the Gulf of Bohai. With its various deep-water docks, the port of Yantai has been China's leader for six years in terms of bauxite loading and unloading capacity, estimated at nearly 100 million tonnes.

Sun Xiunshun, President of the SMB-Winning Consortium and Winning International Group: "The arrival of the Rigel ship with its 300,000 tonnes of bauxite at the port of Yantai illustrates the key role of logistics in the success of the SMB-Winning Consortium. As we aim for a continuous increase in production in the coming years, our success will lie in our logistics capacities, including maritime transport, in order to be able to sell our production."

About the SMB-Winning Consortium
Founded in 2014, the SMB-Winning consortium brings together four global partners in the extraction, production and transport of bauxite: Singapore's Winning Shipping Ltd, a leading Asian shipping company; the Yantai Port Group; UMS, a transport and logistics company with more than 20 years' experience in Guinea; and Shandong Weiqiao, a leading Chinese aluminum producer. The Republic of Guinea is a 10% shareholder.
Since its inception, SMB-Winning has invested more than US$1 billion in its extractive activities in the Boké region. The consortium, which directly employs more than 9,000 people, has also built and manages two river ports.
For more information, visit smb-guinee.com