South Africa: Ramaphosa Will Need All The Help He Can Get to Save ANC 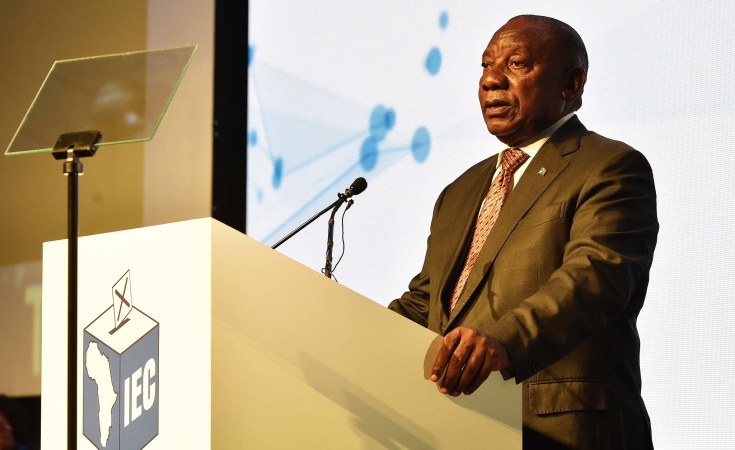 GCIS/Flickr
President Cyril Ramaphosa speaks at the IEC’s official announcement of election results on May 11, 2019.
allAfrica.com
analysis By John Allen

Twenty-five years after Nelson Mandela led the African National Congress to victory in South Africa's first democratic elections, the party is in danger of going the way of those led by an earlier generation of Africa's liberation icons.

In the lead-up to the 2004 elections, in which support for the ANC reached its peak – at 69.7 percent of the vote – the then deputy president, Jacob Zuma, contended that the party would rule until the Second Coming.

To back up his argument convincingly, he would have had to explain how the broad-based liberation movement which originally represented everyone – as the cliché goes – from Stalinists to rich capitalists, could escape the fate which the parties led by Kwame Nkrumah, Jomo Kenyatta and Kenneth Kaunda had suffered a quarter of a century after their liberation.

Zuma maintained his contention during the ensuing years, during which he became president, saying as recently as 2016 that the ANC would retain power "until Jesus comes back". By then he might have pointed to Zanu-PF in Zimbabwe, which has ruled since 1980. But this would not have cut much ice with South African voters, who see the results of Zanu-PF rule in the thousands of Zimbabwean expats who have brought their skills to South Africa.

Notwithstanding Zuma's confidence, the ANC's share of the national vote has declined steadily since 2004, reaching a low point of 57.5 percent in the results of the 2019 election announced at the weekend.

Had Zuma not been ejected, early in 2018, 15 months before the end of his term of office, the party might have done worse; in municipal elections in 2016 it had pulled only 54.4 percent of the vote. As it was, in this national and provincial election the ANC's support in Zuma's home province, KwaZulu-Natal, dropped more than 10 percentage points below its 2014 level – to a low of 54.22 percent.

Comparing this year's vote to the 2016 muncipal vote (a comparison of uncertain value), some South African commentators are attributing the stemming of the ANC's losses to "Ramaphoria" – the hype surrounding the accession to power of the man who ousted Zuma, President Cyril Ramaphosa.

Their argument is based on an analysis which suggests that opposition voters who supported their preferred party in provincial elections changed their votes in the national polls to back the ANC, their aim being to strengthen Ramaphosa's hand in his struggle to root out the corruption which became endemic in the Zuma years.

If the ANC is to survive in its current form in the longer term, Ramaphosa will need whatever support he can get. Even before he replaced Zuma, the party secretariat in place at the time undertook an examination of why other liberation movements became defunct, and recognised the need for "a brutally frank process of introspecting and self-correction".

Many party members who benefitted from the huge kickbacks paid by crooked businessmen seeking contracts to develop infrastructure such as power stations and railway locomotives are still in place, and within a day of the announcement of the election result, evidence of the resulting fight within the party was already bursting into public view.

On the opposition benches in the national Parliament and provincial legislatures, three smaller parties were buoyed by the results although to not much effect on the national stage.

The Economic Freedom Fighters, the populist party born within the ranks of the ANC – and also tainted by allegations of corruption – boosted its share of the national vote to 10.79 percent, more than four percentage points over its 2014 level, and became the main opposition party in three of the country's nine provinces.

The Inkatha Freedom Party of Prince Mangosuthu Buthelezi, with its base in South Africa's Zulu-speaking heartland, stemmed its steady decline, improving its share of the KwaZulu-Natal vote by more than five points since 2014 to win 16.34 percent and regain its place as the main opposition party in that province.

The Vryheidsfront Plus (Freedom Front Plus), a party on the edges of South African politics which represents the interests of white South Africans most resistant to the demands of democracy, improved its share of the vote from less than a percentage point in 2014 to 2.38 percent, an increase attributed by commentators to resistance to growing demands for land reform, including expropriating land without compensating the owners.

For the main opposition party, the Democratic Alliance (DA), the elections brought frustration and disappointment. Outflanked on the right by the Vryheidsfront and on the left by Ramaphosa's relatively moderate image, it lost votes, dropping just over a percentage point to 20.77 percent and bringing to a halt a steady growth path which it hoped would eventually carry it to national power.

In Gauteng, the country's industrial, business and government hub centred on Johannesburg and Pretoria, the DA failed in a bid to take control of the provincial legislature. The ANC avoided having to seek coalition partners to rule the province by the narrowest of margins, with 50.19 percent of the vote. The DA retained its position as the main opposition party, as it did in another three provinces. But it comfortably trounced the ANC in its stronghold in the Western Cape, where it won 55.45 percent to the ANC's 28.63.

ANC in the Lead as South Africa Counts Election Votes
Tagged:
Copyright © 2019 allAfrica.com. All rights reserved. Distributed by AllAfrica Global Media (allAfrica.com). To contact the copyright holder directly for corrections — or for permission to republish or make other authorized use of this material, click here.