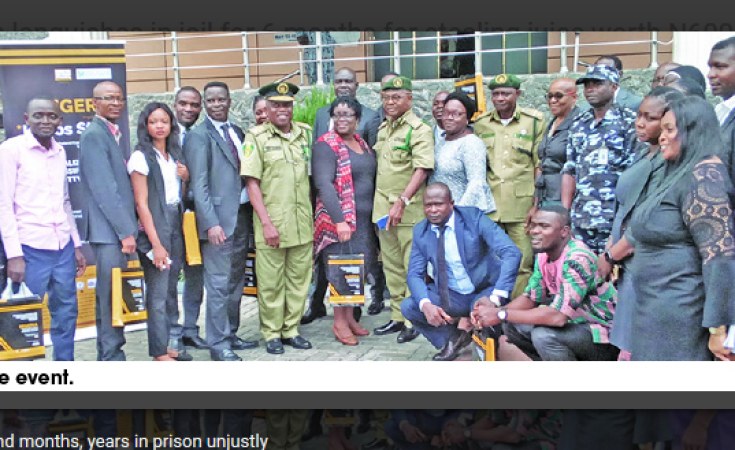 Photo: The Sun
The Prisoners’ Rehabilitation and Welfare Action (PRAWA) baseline report on ‘Decriminalization and Declassification of Petty Offences’ showed that among the law enforcement groups in Lagos, about 85% of the respondents have substantial level of awareness of petty offences classification and believe they should be set aside.
Content from our Premium Partner
Open Society Initiative for West Africa (Dakar)
By Romanus Okoye

Recently, a group, Prisoners' Rehabilitation and Welfare Action (PRAWA) in collaboration with Open Society Initiative of West Africa (OSIWA) presented a baseline report on the decriminalisation and declassification of petty offences.

The report, according to the organisers, was in response to concerns being raised regarding the growing prison population, the attendant congestion and the consequent human rights violations.

Investigation by the reporter showed that there are over 9000 inmates in Lagos prisons. Ikoyi Prisons, built for 800 prisoners, currently accommodates about 2900 inmates.

A senior government official, who pleaded anonymity, said part of the reasons for the congestion was that law enforcement agencies regularly carry out raids in places inhabited by the poor where people are arrested. He said such people, in most cases, cannot bribe police operatives and they end up being charged to court, sometimes with charges different from their real offences.

The Assistant Comptroller-General in charge of welfare, Mr. Ladipo, Nigeria Prisons Service, told a story of 47 disabled people that were arrested and brought to Kirikiri Medium Prisons for breach of peace.

Ladipo, who was the comptroller, Lagos Prisons before his new appointment, said not every infraction by members of the community should be criminalised. He said alternatives should be in place to ensure that the criminal justice system provides for a free and humane society.

He pointed out that many prisoners were mere victims of circumstances and advised the law enforcement agencies to give justice a human face while enforcing the law.

A lawyer, Catherine Onebunne, shared stories of people languishing in prisons over petty offences. She narrated how a 30 year-old Ghanaian man, Yaboh Yaw, was arrested for stealing juice worth N600. He was remanded for six months in prison before he regained his freedom.

"Mr Adejuwon Wasiu and another minor were arrested by the police in Lagos for allegedly belonging to an unlawful society. Adejuwon, 14, was detained in the police station for six months before he was arraigned in court, while the other boy, 17, was arrested while returning from his master's barber's shop. He was also charged with cultism and was remanded in prison for six months," she said.

She also narrated how one Jelli Saka and two others ended up in prison because they failed to pay the sum of N100 on a train. They were arrested by the railway officials and charged to court.

She said they were granted bail but could not meet up with the bail conditions, adding that they stayed in prison for more than seven months before their matter was struck out.

"After perusing their case and their financial background, the magistrate called for the intervention of PRAWA to assist them access legal representation, which we did," she said.

"It was disheartening that law enforcement agencies could incarcerate innocent people for such a long period of time. What is more worrisome is how these minors could properly rei ntegrate with the society that unjustly threw them into prison at a very tender age."

Lead-Nigeria Country Officer, Open Society Initiative for West Africa (OSIWA), Jude Ilo, said that the law should be able to provide protection for the weakest, just the way it provides for the strongest.

"The cost of enforcing those laws was really high," he said. "Unduly and unnecessarily picking people up for random offences, taking them to court and feeding them do not make any economic sense. We need to factor these into our criminal justice system."

Also expressing her observation, the Director of International Operations, National Headquarters, Legal Aid Council of Nigeria, Grace Nsot said it was the people down the ladder in life that are on the streets hawking, sustaining injuries when they are chased by security operatives, especially the task force.

"When we do our own part, we could make their lives better than what it is today," she noted.

Agomoh said in response to the challenge, the African Commission developed the Principles on Decriminalisation of Petty Offences targeted at setting standards for acceptable human rights practices for access to justice.

"The principles look at the nexus between poverty, justice and human rights," she said. "Laws that criminalize petty offences have been identified as having the effect of punishing, segregating, controlling and undermining the dignity of persons on the basis of their socio-economic status."

She said there were laws across the African region that specifically criminalise activities mostly commonly found among people of certain economic class. "The rights of these groups of peoples' are meant to be respected and an understanding of their status is essential. Therefore, the principle of decriminalisation of petty offences is an initiative as well as a wakeup call to national government in the African region to have a better approach towards the treatment of the poor in our societies.

"The principle of declassification and decriminalisation of petty offences of the African Commission is yet to attract necessary attention from the government of Nigeria and many other member states. This is largely due to the limited awareness and sensitisation of stakeholders in justice delivery system across the continent, including multilateral agencies and international NGOs."

For instance, PRAWA's baseline report on 'Decriminalization and Declassification of Petty Offences' showed that among the law enforcement groups in Lagos, about 85% of the respondents have substantial level of awareness of petty offences classification and believe they should be set aside.

Conversely, the level of awareness of the principles of decriminalisation of petty offences of the African Commission is critically low among the respondents. The highest is the FCT where 35% indicated that they were aware. In Lagos and Abia States, it was 30% each while Enugu was 28% and Kano 25%.

For the vulnerable group which comprise the victims and potential victims like petty traders, hawkers, commercial sex workers, the level of awareness of offences classified as petty was low. In Abia, Enugu and Kano it was 36%, 28% and 29% respectively.

The demography of the respondents showed that 70% of them have no formal education, while 60% earn monthly income below N20,000; meaning that they are susceptible to committing crime.

The Chief Judge of Abia State, Justice Onuoha AK Ogwe, said the starting point was to remember that suspects are humans too. He suggested that the solutions lie in "emphasise no-custodial sentencing, improve facilities at police stations and remove discrimination between ex-convicts. The difference between simple and serious offences should be kept alive."

Chief Judge of the FCT, Hon. Justice I.U. Bello, said criminal justice system in many African countries, Nigeria inclusive, seems to have a common denominator which is widespread criminalization and punishment of petty offences.

This, he said, often leads to arbitrary arrests and detention, thus encouraging the violation of human rights and fundamental freedoms of the poor, marginalized and vulnerable people.

He said: "For this group, the justice system is a maze. It is difficult to understand and hard to navigate, largely due to challenges such as lack of financial resources and access to legal representation. As a result, most of such persons are left to languish in jail for petty crimes and offences."

He noted that it was to reverse this trend that the Africa Commission on Human and Peoples Rights (ACHPR), in a move that represents international best practices, engaged in a campaign to decriminalise and declassify petty offences in the region as well as find alternative punishment such as non-custodial sentences.

"To this end," he said, "the ACHPR at its 63rd ordinary session on October 25, 2018 adopted the Principles on Declassification and Decriminalization of Petty Offences in Africa."

He explained that the purpose of the adopted principles was to guide states on the decriminalization of petty offences in Africa in terms of Articles 2, 3, 5 and 6 of the African Charter.

"The principles establish standards against which petty offences created by law should be assessed and promote measures that can be taken by State Parties and Non- State Actors of goodwill to ensure that such laws do not target persons based on their social origin, social status or fortune by criminalizing life-sustaining activities."

He further said that many of the offences identified by ACHPR as ripe for decriminalization and declassification amount to nothing more than the criminalisation of poverty, homelessness and unemployment.

"Their continued enforcement is disproportionately experienced by the poor and marginalized populations, including persons living with disabilities," he said.

He noted that their enforcement do little or nothing to promote public safety, peace and order. "It is equally significant to note that most of the laws that fall into this category of interest bear vestiges of the colonial government.

"All laws and their enforcement must be assessed against the constitution and other human rights treaties such as the International Covenant on Civil and Political Rights (ICCPR) that seek to protect the right of all citizens to be free from arbitrary arrest and detention and the right to fair trial.

"As such, this is the right time to seek the support of stakeholder institutions – government and non-governmental alike – to rally round for the implementation of this project. Together, we have a responsibility to assist the poor and those in vulnerable situations by using the instrument of law to lessen their exposure and vulnerability to legal, economic and social challenges.

"We must and should work together to implement programmes and policies, not only to end poverty in all its dimensions, but also to decriminalise and declassify those classes of offences that seem to target the poor and marginalized persons."

Prof. Chiso Ndukwe-Okafor, the Chief Executive Officer, Sources Resources Logistics & Consulting, USA, said: "It's about time we as a people channelled our efforts towards providing sustainable solutions towards nation building and helping the common man, rather than expending our energies creating and enforcing draconian laws that provide no lasting solutions."

Assistant Inspector General of Police, Department of Training and Development, Mr. David Folawiyo said this exercise would help reduce the number of prisoners. "It would also engender civility in police work," he added.

Tagged:
Copyright © 2019 Open Society Initiative for West Africa. All rights reserved. Distributed by AllAfrica Global Media (allAfrica.com). To contact the copyright holder directly for corrections — or for permission to republish or make other authorized use of this material, click here.

Why the One-Term Limit Does Not Improve Governance

Report: Challenges Faced by Persons With Albinism in Sierra Leone

Democracy in West Africa: Between Fragile Progress Hopes and Fear