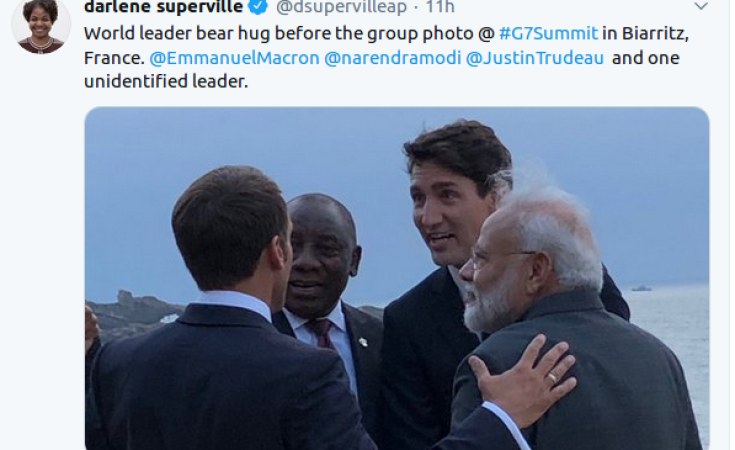 @dsupervilleap/Twitter
The tweet by Darlene Superville.
allAfrica.com
By Renee Moodie

Cape Town — South African Twitter users are outraged at a United States reporter who apparently does not know who President Cyril Ramaphosa is.

Darlene Superville, whose Twitter biography says she is the White House reporter for The Associated Press, tweeted a picture on Sunday evening (Central Africa Time) with the words: "World leader bear hug before the group photo @ #G7Summit in Biarritz, France. ⁦@EmmanuelMacron ⁩ ⁦@narendramodi ⁦@JustinTrudeau and one unidentified leader."

The "unidentified leader" is clearly Cyril Ramaphosa, who is attending the G7 Summmit in France.

As of 9.20am South African time, some 11 hours after it had been posted, the tweet was still present on Superville's timeline, who it seems has not been reading the 577 replies or 229 retweets which her tweet has accumulated.

Other people have not been as polite:

@MissSteelo:  we demand an apology for this disrespect

@HLABAZ:  Lol African Americans are so ignorant, and it is really embarrassing. These people don't care to learn anything about Africa and its people.

@miss_vimbayi:   Oh because the "unidentified leader" is from Africa you automatically don't know how to do proper research on who he is. A whole journalist

@LeeRaa_B:   You are being unreasonably lazy with your research

@AngeloCoppolaSA: Wow! Really? You can identify someone who's back is completely against the camera by not the man facing the camera? Inexcusable.

@AlastairMcA30:   This is very embarrassing. A 30 second Google search would have revealed that he is Cyril Ramaphosa, the president of South Africa.

@PearlPillay: Wow the @AP  really got the cream of the crop here.

@Sisonkemsimang: She's gonna have some questions to answer at the family reunion this year.

G7 Summit - U.S.$618 Million Pledged to Fight Aids, TB, Malaria
Tagged:
Copyright © 2019 allAfrica.com. All rights reserved. Distributed by AllAfrica Global Media (allAfrica.com). To contact the copyright holder directly for corrections — or for permission to republish or make other authorized use of this material, click here.