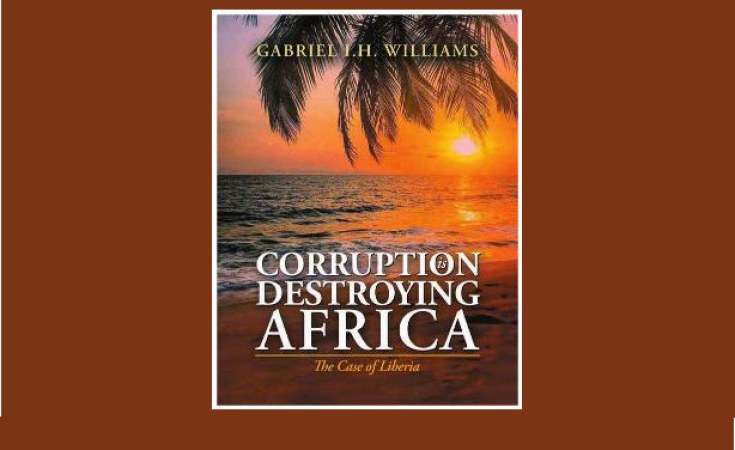 Gabriel I.H. Williams returns to the publishing scene with the release of 'Corruption is Destroying Africa: The Case of Liberia'

From the author of "Liberia: The Heart of Darkness" comes a new account exposing how "Corruption is Destroying Africa: The Case of Liberia" (published by Trafford Publishing). In his latest book release, Gabriel I.H. Williams narrates the prevailing reality in his home country Liberia, and in Africa as a whole, where corruption has become a major hindrance to national and continental progress.

Williams writes that the book is intended to contribute to the ongoing discourse about Liberia or about Africa, which has often left people perplexed. According to a 2013 World Bank report, Africa has 30% of the world's minerals and proven oil reserves equivalent to 10% of global stock. How is it that Africa, which has such enormous mineral and oil wealth, is the poorest continent in the world?

corruption is like a cancer eating at the vitals of Africa

The author also notes that a similar question would suffice for Liberia, which became independent since 1847, has been a sovereign nation for over 170 years but is ranked as one of the poorest countries in the world. This is irrespective of the fact that the country is endowed with abundant natural resources. Accordingly, Williams herewith submits that Africa or Liberia is not poor but poorly managed, and that corruption is a major source of bad governance, widespread poverty and instability on the continent.

"There can be no question that corruption is like a cancer eating at the vitals of Africa, my beloved country Liberia being one of the worst affected on the continent. This is why this book is titled, 'Corruption is Destroying Africa: The Case of Liberia,'" he asserts. "Because of corruption, critical public services such as health and education have remained in a state of dysfunction."

According to Williams, the book is penned "To contribute to the ongoing discourse regarding measures that are needed to contain corruption and other acts of bad governance that have caused instability, poverty and underdevelopment in Africa and my home-country Liberia." Through this, he urges for the proper management of Africa's resources in order to improve the conditions of its people.

The book is a strong call for Africa's natural resources to have value added, and to empower Africans through education, skills training and equal employment opportunities. Ultimately, the book relates to the prevailing reality of life affecting Africans and people of African descent.

About the Author
Gabriel I.H. Williams is a diplomat and former deputy minister of information in the government of Liberia. A career journalist, he has worked with several news organizations in Liberia and the United States as a reporter and editor, including serving as managing editor of The Inquirer independent newspaper in Liberia, and staff writer of The Sacramento Observer Newspapers in Sacramento, California. He was acting president of the Press Union of Liberia, the national journalist's organization, during the early years of the Liberian Civil War before fleeing to the United States due to death threats for his role as a journalist. Williams is also the author of  "Liberia: The Heart of Darkness – Accounts of Liberia's Civil War and its Destabilizing Effects in West Africa," published in 2002 in the United States.

Trafford Publishing, an Author Solutions, LLC, author services imprint, was the first publisher in the world to offer an "on-demand publishing service," and has led the independent publishing revolution since its establishment in 1995. Trafford was also one of the earliest publishers to utilize the Internet for selling books. More than 10,000 authors from over 120 countries have utilized Trafford's experience for self publishing their books. For more information about Trafford Publishing, or to publish your book today, call 1-888-232-4444 or visit trafford.com.

Tagged:
Copyright © 2019 Trafford Publishing. All rights reserved. Distributed by AllAfrica Global Media (allAfrica.com). To contact the copyright holder directly for corrections — or for permission to republish or make other authorized use of this material, click here.