South Africa: What Trevor Noah Has and Hasn't Said About Xenophobia 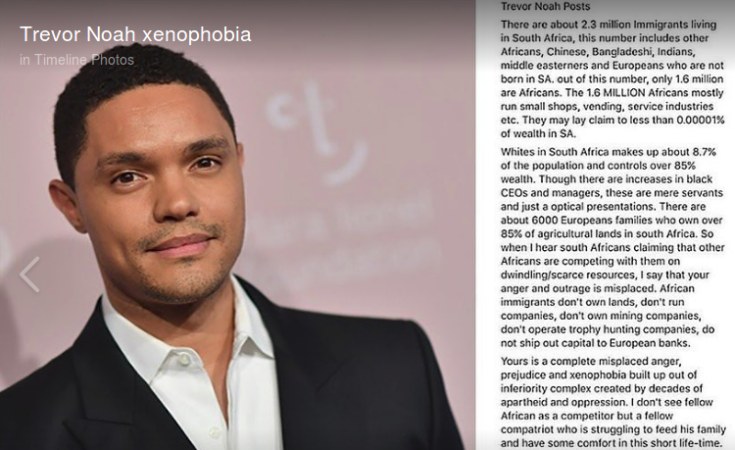 South African comedian and Daily Show host Trevor Noah has something to say about xenophobia - but there is also something he did not say.

A Facebook post supposedly from Noah has been debunked as fake - but he has agreed with opposition politician Julius Malema on something.

First off, what he has said:

On September 9 Noah tweeted: "I don’t always agree with Julius Malema but this statement on Xenophobic attacks in SA is perfect."

His tweet carries a video, in which the Economic Freedom Fighters leader says that once people are done with targeting foreign nationals, they’ll go after South African citizens. "They're going to say, 'The reason we don’t have jobs here, is because of these Zulus. They must go back to Natal. Xhosas must go back to Eastern Cape, Shangaans must go back to Limpopo.' Because there will be no foreigners left to fight."

Malema says it's a myth that foreigners are stealing jobs and opportunities, and says the attacks should be treated as criminal acts.

What Trever Noah did not say:

A Facebook post attributed to Noah implies that black South Africans and African migrants should join together and direct their anger toward whites.

The Atlantic Council’s Digital Forensic Research Lab has done a detailed analysis of the fake post, and quotes Noah’s publicist, Jill Fritzo, as confirming that the alleged quote is not authentic.

The research lab says the quote began circulating in earnest on September 3, though its origins can be traced back to at least February 2017.

"Multiple African media outlets republished the quote as fact, and far-right online personalities in the United States latched onto it as evidence that Noah is anti-white, with the quote eventually landing on a Trump campaign senior advisor’s Twitter feed," says the lab.

The lab notes that there have been claims that the quote originated on The Daily Show in February 2017, but casts doubt on those claims, saying "the quote would essentially be a transcript of spoken English, yet it lacks the hallmarks of spoken English, and from the opening line contains run-on sentences that do not flow naturally as would something spoken aloud". The text also varies from version to version.

There has been a wave of violence in South Africa, with mobs targeting foreign-owned shops.